Budget lockup brings together the who's who of Australian political media. From Adele Ferguson to Mark Colvin, Myriam Robin and Sally Whyte give up the goss: who did what and when? 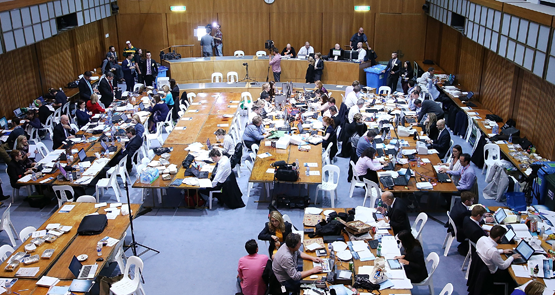 The pollies start before most journos on budget day.

It was 8.15am when Treasurer Joe Hockey made the traditional walk up the Parliament House steps. He didn’t say much, which is why the papers all reported on the 16-year-old who rushed up at the end of his conference to ask for a selfie.

The journalists meanwhile came in slowly, a gaggle at a time. News Corp and Fairfax drove separate busloads of scribes down from Sydney — they met at the McDonald’s at Sutton Forest (“Skim lattes at 50 paces,” economics scribe Jess Irvine tweeted). It’s halfway to Canberra.

For those who flew in to the nation’s capital, it was a stressful start to the day with bumpy rides from both Sydney and Melbourne. A large contingent from The Guardian were joined by one lone Crikey correspondent, who worried about the future of independent media during the turbulence. It was a star-studded 8.30am flight from Melbourne, with The Australian’s Cameron Stewart and Gold Walkley-award-winner Adele Ferguson both spotted making the trip. New Matilda’s Ben Eltham missed the flight — but talked his way on to a later one.

To entertain ourselves before the storm, your correspondents made a game of “spot the pollie”. We rushed down to Aussies Cafe when we heard that Joe Hockey was quietly enjoying a coffee there with Jamie Briggs. No luck wrecking his morning though — he’d gone by the time we arrived, replaced by an odd collection of old and new media superstars waiting patiently in line.

Fairfax’s Latika Bourke got in a quick chat to her former colleague, ABC correspondent turned Abbott spinner Mark Simpkins, while she waited for coffee. The Guardian’s Greg Jericho was in line behind Crikey — looking very dashing in a pink-tie-on-pink-shirt ensemble. Meanwhile at the tables, Ferguson was deep in conversation with The Australian’s senior business scribe John Durie and CEO Nicholas Gray.

A table away near the window, the BuzzFeed crew gathered, listening to man-about-town Mark Di Stefano hold court. The lobbyists were there too — Peter Strong from the Council of Small Business Australia huddled over a laptop. He’s always a jolly fellow, but he was in an unusually good mood this morning, and no wonder — he has reason to be happy with this budget.

Speaking of budget winners, the owners at Aussies are making a killing from a $1 surcharge for using EFTPOS. We hear it’s only a recent addition to the cafe — if so, it’s well timed, the out-of-staters don’t know what’s hit them!

Elsewhere in Parliament, we heard rumour that it was Bill Shorten’s birthday today, and he served birthday cake at his caucus briefing. Tom Connell from Sky was spotted in a lift with some of said cake. Clearly we went to the wrong place for breakfast. And it wasn’t even the only cake we missed. AAP scribe Lisa Martin has for several years now made a themed budget cake to be consumed the morning before lockup. This year’s was sculpted into a model of the HMAS Barnacle, following on from last year’s “budget emergency” ambulance.

By 1pm, we were in line for the lockup. Reporters all crowded together like they were waiting to get into the Boxing Day sales, and mobile phones were surrendered to Treasury officials — this is, no doubt, the longest time they’ve spent away from their owners in months.

The budget papers this year were delivered in a stylish black canvas bag. Reporters angled for the best access to power points, while the more seasoned reporters knew to bring a powerboard to keep laptops alive. The big media organisations mostly had rooms to themselves, but Crikey’s team shared with ABC radio. Our afternoon was filled with the dulcet tones of Mark Colvin and Fran Kelly — in the flesh.

As the afternoon wore on, the divisions between newsrooms broke down. Journalists hopped from room to room to check notes with friends and fellow travellers, or meet on neutral territory in the corridors. Treasury officials were on hand to answer questions about particular items, and while reporters were asked to give detailed information on questions to a sort of concierge, questions weren’t required in writing as we’d initially heard.

After six hours locked inside the bowels of Parliament House, we were ready for a drink. It’s over to you, Treasurer.

Quite a few paragraphs, but NOTHING of substance. Crikey is a serious media outlet?

Norman H. you are a bore, this is a nice bit of colour among the dozens of budget articles i have skimmed through today.

IMHO Aussies coffee is poop by the way.

This is EXACTLY the sort of media-political elite navel-gazing I DON’T WANT to read about. There’s enough of this rubbish everywhere else, please spare us in future, Crikey.