As the Abbott government prepares to deliver its 2015-16 budget, freelance journalist Andrei Ghoukassian takes a look at last year's effort and discovers not much has actually passed. 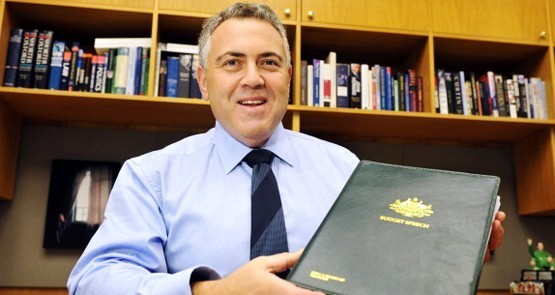 Joe Hockey with his budget speech, 2014

The Abbott government’s first budget went down about as well as a warm beer on a hot summer day, and whether it was naivete or just plain hubris, the consensus seemed to be that the government fundamentally misread the public’s political temperament. Radical and unexpected changes to healthcare and higher education were met with hostility from unions and industry associations, spawning nationwide protests. The past year has been marked by struggle both in the streets and in the Senate, with a diverse and divided assortment of crossbenchers controlling Abbott’s ability to pass legislation. After taking a hammering in the past 12 months, and with speculation his job could be on the line, Joe Hockey’s second budget promises to be a more restrained affair. We thought it’d be a good time to take a look at his first budget’s hits and misses, and find out just how many of its major initiatives and savings have made it through the Senate scuffle.

The 2014-15 budget contained 14 major initiatives totalling around $15.5 billion over four years, a large chunk of which was part of the Infrastructure Growth Package. While legislation attached to the asset-recycling package is stalled in the Senate, the government has been getting around this by using appropriation bills to pay incentives to state governments that sell off their assets. Deals have already been signed with the ACT and NSW, despite Labor and the Greens calling for more stringent cost-benefit analysis requirements.

Budget measures that have passed include the establishment of an Emissions Reduction Fund; the indexation of Defence Force retirement and death benefits; the establishment of an Australia-Korea free trade agreement and a fund to help regional areas affected by it; the introduction of support loans for apprentices; and a boost to the mature-age worker subsidy. Overall, 11 of the Coalition’s 14 major initiatives have been legislated, while the establishment of the Medical Research Future Fund remains on the to-do list. Abbott’s paid parental leave plan was mentioned in the 2014 budget, but the costs were not included in the major initiatives, presumably because the plan was slated to begin in July this year. Of course, the plan was eventually dumped in February.

The government has had much less success with its modest attempts to raise revenues. Several measures aimed to raise more than $8 billion over four years, but just three of the eight proposals in the budget have been legislated. A temporary 2% “budget repair” levy on high-income earners was backed by Labor and will raise more than $3 billion, while the government bypassed the Senate last October to reintroduce fuel excise indexation. However, if it cannot gain the support of Labor or the crossbench, the government will have to refund the billions raised by the change. Several other measures have been blocked by the Senate, including reducing tax incentives for research and development ($620 million); the abolition of the Mature Age Worker Tax Offset ($660 million); and changes to the Dependent Spouse Tax Offset ($320 million).

Not surprisingly, the cuts outlined in last year’s budget have had some of the most trouble finding support in the Senate. The government identified 20 major savings totalling around $36 billion over four years, but just eight have found enough backing to become law. The fight over higher education reform has been especially brutal, with Christopher Pyne twice trying to push fee deregulation, and twice failing. The changes would have saved more than $4 billion over four years by shifting more tuition costs onto students, lowering the income level at which loans are repaid, and adding interest to the CPI indexation of outstanding loans. Labor and the Greens were joined by several crossbench senators to defeat the bill, including Nick Xenophon, former Palmer United Party senators Jacqui Lambie and Glenn Lazarus, as well as Ricky Muir. While Pyne seems married to the reforms, Abbott has been forced to abandon other savings measures. The proposal for a $7 (then $5) Medicare co-payment for GP visits proved toxic, sparking protests and raising the ire of the Australian Medical Association. The Senate also blocked changes to public hospital funding, the cost of accessing drugs through the PBS, and the cessation of the Seniors Supplement.

A key unpassed measure that is yet to fully be resolved is proposed changes to family tax benefits. Cutting around $7 billion over four years, Abbott proposed cutting Family Tax Benefit Part B when a family’s youngest child turned six instead of 16, freezing payment rates for two years, cuts to end-of-year supplements, and a lowering of the upper income threshold from $150,000 to $100,000. The Coalition succeeded in passing the last item through the Senate after winning Labor’s support, but the remaining savings are now tethered to the progress of Social Services Scott Morrison’s new families package. This all but ensures another year of Senate jousting, with Labor, the Greens, and a majority of the crossbenchers all against the Family Tax Benefit changes. A proposal to make jobseekers under 30 wait six months to receive the Newstart Allowance was blocked with hostility, but the government saved plenty by “reprioritising” foreign aid. Other savings also made it through: the $900 million tools program for apprentices was scrapped, as was the $650 million Aged Care Payroll Tax Supplement. Public service efficiency dividends produced further savings, as did drastic cuts to indigenous affairs programs. But of the government’s 20 major savings proposals, just eight were successfully implemented.

Overall, from the 42 major initiatives, revenue raisers, and savings in the 2014 budget, Abbott has managed to negotiate the passage of just 22 items, giving him a strike rate a smidge above 50%. Abbott has been promising a dull budget this time around, although many will remember his “no surprises” promise on spending during the 2013 election campaign. “We will continue to take big significant political risks for budget repair. But, in the end, what I believe people will conclude about this budget is that it is measured, responsible and fair.” Time will tell if the public, and the Parliament, agree with him.