The government has unveiled a strong child care policy that will boost workforce participation -- but the means to pay for it may mean trouble ahead for the government. 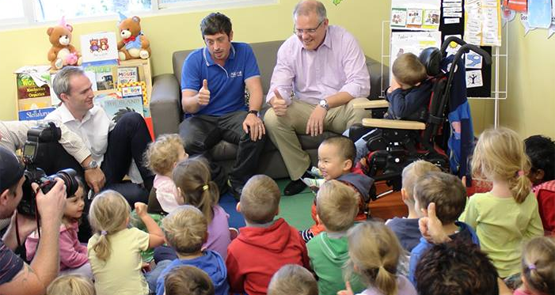 The government’s childcare package unveiled by Scott Morrison yesterday is a significant boost for workforce participation that also preserves the best elements of the system that Labor put in place. But the funding arrangements are half-smart and incoherent, and that’s where politically a good package might perish.

The package will provide a higher proportion of childcare expenses for low- and middle-income earners than is currently available, will continue to provide assistance for high-income earners, will encourage women who aren’t working or working fewer hours than they might to take more paid employment, but will continue support for low-income households where a mother isn’t working to still access childcare and early education services — thereby ensuring young kids from low-income backgrounds continue to access enormously valuable early education.

The package adopts most of the recommendations of the Productivity Commission’s Childcare and Early Childhood Learning report — including retaining the National Quality Framework — but recognises the implicit criticism of that report, that merely reshuffling funding or providing a little additional money isn’t going to make much of a dent on the level of workforce participation. Instead, the government is putting more money into childcare support — a lot more. The cost will be $3.2 billion over the forward estimates. Except the new arrangements don’t start until 2017-18, which will be the second last year of the forward estimates in tomorrow night’s budget. We’re looking at an ongoing cost of $1.5 billion to $2 billion a year.

It’s an expensive package, and the funding for it is where the problems start. Most of the additional funding will come from the Family Tax Benefit B cuts to single-income families announced in last year’s budget but DOA in the Senate. These cuts were in and of themselves good policy; the fact that they’ve enraged the Nationals is, as usual,  a good indication that they make sense. But they’ve lain dormant in political debate since the last budget; all attention has focused on the many other policy debacles revealed last May. There’s a real risk that what the government has now done is draw public attention to welfare cuts of which voters were previously unaware, particularly among regional and rural communities, and given Labor another “fairness” issue on which to campaign when the Coalition (rather like Labor trying to be tough on asylum seekers) is trying to convince the electorate it’s capable of fairness.

But another source of savings of around $1 billion over the forward estimates will come from ending so-called “double-dipping” by people with access to employer-funded paid parental leave. As many have already pointed out, the government has gone from a “signature policy” in which money would have been hurled at women taking six months’ parental leave to punishing anyone who takes parental leave paid for by their employers. As Kate Carnell of the Australian Chamber of Commerce and Industry said very quickly, this would simply mean employers will end parental leave arrangements and switch that money into other forms of remuneration in order to ensure their employees won’t be out of pocket. The end of employer-funded childcare now looms in Australia.

It’s a half-smart move by the government, poorly thought through and completely inconsistent with the logic of the childcare package. One of the reasons why childcare funding to high-income earners hasn’t been cut but instead capped at $10,000 per child for families earning above $185,000, is that, as the government has made clear, this is not about welfare — in which case, assistance would be unjustified — but about creating an incentive for workforce participation, under which high-income earners still have an incentive to return to work or increase their work hours.

Anyone who can remember long than five minutes will recall that Abbott’s signature PPL policy was also justified because “paid parental leave should be a workplace entitlement not a welfare payment” as well. And yet now paid parental leave is being treated as welfare that one should not be able to “double-dip” into. It’s completely inconsistent with the Coalition’s own logic on the issue.

The result is that a very good piece of policy risks becoming mired in a fight over funding that risks reopening the entire argument over fairness that the government is desperate to shut down.

Like the good old days of Honest John Howard & Jelly-back Costello (tax-cuts : infrastructure emasculation) – “The Age of Entitlement” might be dead for some : but when it comes to saving Toad’s electoral bacon “money’s no object”?

It’s a shame Crikey hasn’t championed a return to State Education Systems which once ensured working class children and other disadvantaged groups received a quality education in State Government Schools. One possible explanation for this shortcoming I’d overlooked until today is to be seen in the summary of Crikey’s Summary in the lower right corner of this page. Education is NOT one of the Crikey interests — unless, presumably — it has a commercial element to it.

I thought that we have been told that one income families i.e. mothers who stay at home, won’t be able to access child care support. In any case, all they are doing is reversing back to the system of paying child care support straight to the providers before Howard fiddled with it, but with a few nasties pitched in as usual.
Norman, this article is about child care, not education.

As I understand it, part B is for people with young kids who stay at home to bring them up to school age. It kind of acknowledges that a single income is not always viable.

Reducing or eliminating this benefit may be thought of as a “good” way to encourage these families to get a second income. This is further encouraged by funding childcare when that second income comes in.

I think Bernard often sees things in a more black-and-whitish sort of way than one expects, particularly with economic matters where he likes things to be efficient.