Julie Bishop has visited Thailand, the highest-ranking Abbott government member to do so, but funnily enough she did not seem to want to see the refugee's paradise that is Cambodia. 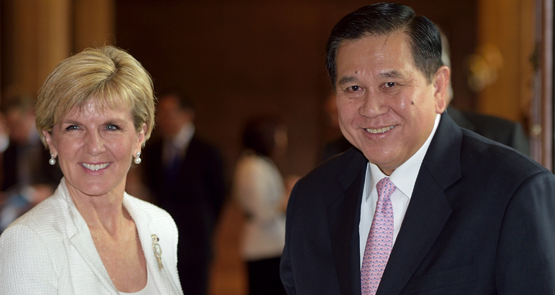 After visiting Pakistan last week to give her rather fetching headscarf another public outing another, Foreign Minister Julie Bishop snuck into Bangkok on Friday with no fanfare.

She was the first cabinet minister from the Abbott government to visit the country since its 2013 election. Thailand is a top-10 trade partner, and almost 1 million Australians take holidays there each year. It also a major drug- and people-smuggling hub, so the trip was overdue.

The visit was highly significant for both countries. For the Abbott government it capped off almost 12 months of painstaking diplomacy needed to repair the damage to the relationship caused by Australia’s reaction to last year’s military coup, which was seen as offensive by the junta.

Immediately following the coup on May 22 last year, the Australian government said it had “grave concerns”. Canberra reduced its engagement with the Thai military and lowered its “interaction” with the military leadership.

But unreported comments Friday in Bangkok signalled a major shift by Australia and a triumph of realpolitik.

“We were concerned by the events here in Thailand, and we stated so at the time. But my visit here is designed to understand more about the progress that is being made and the government thinking around a return to democracy and the timeframe in which that will occur. So I’m here to understand more deeply the process that we understand is underway,” Bishop told reporters Friday.

Bishop was one of the most senior Western leaders to visit Thailand since the coup and has been seen by Thai leaders as adding legitimacy to the regime — a position perhaps best illustrated by the headline that appeared in the online version of an interview she gave to The Bangkok Post: “Australia helps refire ‘beacon of democracy’.”

The coup’s leader is still banned from entering Australia, although other, more conciliatory measures have been quietly implemented over the past six months. Bishop made some vague comments to The Bangkok Post that Australia was looking at the ban, but when Crikey asked her office, we were told no changes were being contemplated.

Bishop crammed plenty into her day, starting with with a business breakfast to belatedly launch the Thailand portion of the $150 million New Colombo Plan, which is, frankly, one of the more innovative initiatives of the Abbott government. Although it is an education initiative — Australian undergraduates are offered scholarships and grants for study and internships in the Asia-Pacific region — it was Bishop’s brainchild, and it is being run out of her office rather than that of Education Minister Christopher Pyne.

The centrepiece of the trip was a 45-minute meeting with coup leader and self-appointed Prime Minister General Prayuth Chan-ocha, but she also spent time with former prime minister Yingluck Shinawatra.

It’s worth noting that Tony Abbott has accepted an invitation to visit Thailand, but the street protests that started in November 2013 and the subsequent coup have blocked his way. Crikey understands that Trade and Investment Minister Andrew Robb is also planning a visit to Thailand, which should prove interesting given his central role in creating the Thai Rak Thai Party, which was the first of three parties that Yingluck’s brother Thaksin headed and which swept him to power in 2001. Thaksin is the key hate figure for the junta.

Bishop’s visit came as Thailand struggles to deal with a fast-moving growing refugee crisis that was brought to the attention of the global media on May 1 with the discovery of slave camps on the Thai-Malay border in May, as reported by Crikey last week, and the subsequent uncovering of more camps in that area, as well as short-term holding camps on the island off the coast of western Phang Nga province, close to the holiday island of Phuket.

The United Nations High Commissioner for Refugees estimated last week that more than 100,000 people have fled the northern Myanmar province of Rakhine as well as neigbouring Bangladesh to escape sectarian violence  in the first instance, and extreme poverty in the second. Thailand and Malaysia have now stepped up the protection of their borders, leaving as many as 10,000 people stuck on refugee and slave boats in international waters and sending them further away to land. Yesterday, a boatload of 469 people landed in the Indonesian province of Aceh, drawing Indonesia further into the crisis. How long before a boatload from Myanmar hits Australian waters? To where will the Australian navy turn them back — Myanmar? Thailand? Will they make it?

With the refugee/human trafficking crisis escalating in the region, it was also interesting that while Bishop stopped in Thailand, she didn’t take the opportunity to take the one-hour flight to neighbouring Cambodia, where Australia is planning to resettle refugees from the Nauru detention centres.

But the resettlement plan, quite apart from the appalling decision to send desperate people to a country run by an odious dictator where a large part of the population is also desperate, is proving problematic for the Abbott government.

In a letter to inmates last month, peppered with lies that pitched Cambodia as some kind of nirvana, the Australian government flagged it intended to send the first planeload of refugees from Nauru to the Cambodian capital soon, but the timeline was dismissed by the Cambodian government.

Now Cambodian cabinet ministers have once again rubbished claims by Immigration Minister Peter Dutton who last week released a video saying a “small umber” of refuges from the Nauru detention centre will shortly be sent to Phnom Penh.

To make matters worse, Cambodia itself is floundering in the face of an increasingly stern test to its attitude to refugees and has threatened to send persecuted Christians from the ethnic Montagnards from Vietnam — if it can’t find a third country to settle them in — back home. There they will face almost certain punishment, including incarceration, by the Communist government through a process known evocatively as refoulement.

Perhaps Australia might like to take them as something of a quid pro quo for its own outsourcing of its own refugees to Cambodia. Yeah, right.

Why can’t we mention her?

“Corrupt” like Thaksin and his mob?
As for Dutton’s “small umber” – maybe it’s just a colourful phrase, more pc and not as offensive as “small (dark) yellow”?

Congrats, Michael, on at least understanding she wore a red scarf. The rest was a tad more difficult?

Don’t let Pyne visit them then!

Perhaps we could organise some sorrt of daisy chain of taking in each others dirty laundry/refugees so that eerbody is …err .. equally dissatisfied?