Poor old James Packer is not having a great time of it in Macau. But there is another enticing prospect beckoning ... 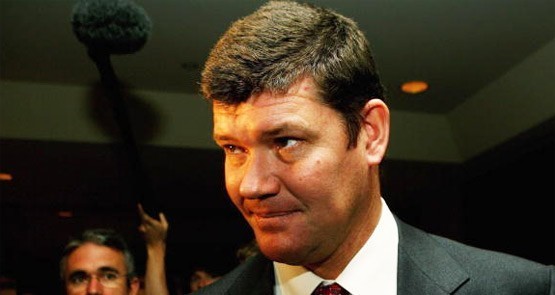 Early last year, as Tony Abbott criss-crossed Asia with a Praetorian guard of Australia’s wealthiest and most powerful business people, furiously lining up free trade agreements, James Packer was a permanent fixture at the head of the group.

Packer, like his erstwhile rival and sometime partner Kerry Stokes, has placed his bets on Asia for growth in his casino business. And for a while it looked like all the ducks were coming up in a row as he pulled the arm on his strategic slot machine.

What a difference a year makes. Abbott, while certainly up off the mat, is still struggling — next week’s budget is the real test of just how real his comeback might be. As if in tandem, Packer’s Asian strategy has thrown its own wobbly. Several bets — Sri Lanka and Macau, at least for now — have gone south, and he’s now doubling up on the last big one available: Japan.

Last week, the stark truth for Packer’s joint venture Melco Crown Entertainment (MCE) became ever clearer. Revenues in the reinvented gambling enclave of Macau, the centrepiece of Packer’s regional strategy, were down a whopping 38% in April compared to the same month the previous year. Macau has suffered the worst three months since it was green-lit as China’s gambling hub 15 years ago.

There’s worse to come, with Galaxy set to enter the market this year, and MCE’s own Studio City resort set to finally open, too, after years of on-again-off-again, which means more sticky paws grabbing a slice of a shrinking pie and the fading Chinese economy only adding to the pain.

“Our concern is that when Galaxy and MPEL [MCE] open this year, demand will not lift sufficiently to match supply, placing even greater pressure on same-store revenues and margins,” analysts at Japanese investment bank Nomura said.

NASDAQ-listed Melco Crown’s share price has reacted predictably. Last night, its stock closed at US$20.10, almost  a clean 50% fall from US$39.63 at the beginning of last year. Ouch.

The source problem is abundantly clear: it is Chinese President Xi Jinping’s ongoing anti-corruption campaign, the most serious in the 65-year history of China’s rancid, corrupt one-party government.

As the anti-corruption campaign has intensified, Macau’s revenue has fallen further back, in an unfortunate coincidence. James Packer himself has assured people time and again that Macau’s casinos are most definitely not money laundries. You decide.

At its peak last year, Macau was turning over about seven times the gross gaming revenue of Las Vegas. But the tap has been throttled dramatically, and its unclear just when, if ever, it will come back.

In addition to the ongoing problem that is Macau, MCE took another big hit earlier this year, abandoning a US$350 million project when the Sri Lankan election unexpectedly went to reformer Maithripala Sirisena, who ousted former president Mahinda Rajapaksa.

It’s worth mentioning that there has been some joy for MCE with the successful launch of the City of Dreams resort in Manila. But the Macau/Sri Lanka double whammy will only serve to amp up the pressure on MCE to secure one of the much sought-after licences in Japan, which last week took a step closer to becoming a reality.

The competition in Japan is, too put it mildly, intense. MCE is one of about five gambling outfits that insiders believe stand some chance of securing a licence to build what are fast becoming known as “integrated resorts”. Casinos? Wash your mouths out.

Last week, almost a year after his initial promise, Japanese Prime Minister Shinzo Abe finally presented legislation to Parliament (what else would you call a group of fat cat legislators except the Diet?). Melco Crown and Crown Resorts executives are increasingly well acquainted with Tokyo’s hotspots. But the story has a way to run. Commentary in Japan has said that the government hopes to get its legislation up by August, when the current parliamentary session finishes, although there is still enough opposition that the legislation is not a lay-down misere.

It’s worth noting, too, that ratings group Moody’s believes MCE is better placed than some of its rivals to withstand the stress that Xi is wreaking on the industry, and its early entry into Macau — as well as its Philippines business — are seen as pluses.

But it’s all relative. In absolute terms, Packer — like his fellow Tory cheerleaders Andrew Forrest, Gina Rinehart and Stokes pere et fils — has had billions wiped off his paper wealth.

Shareholders will be fervently hoping he is holding a winning card when the croupier calls for bids in what promises to be the region’s second-biggest gaming market — one worth a cool US$40 billion or so a year.

When to hold ’em, when to fold ’em: did Nine fail to disclose a Packer-funded trip?

It is a terrible thing to have most of one’s wealth in gambling – an industry dependent upon corruption and money laundering.

How to sleep at night?

He should diversify with drugs and prostitution.