“Two Senior Executives of the NSW SES were sacked last week including whistleblower Tara McCarthy. This followed numerous corruption claims from Deputy Commissioner  Tara McCarthy, which resulted in the termination of the SES Commissioner Murray Kear who now has been charged as a result of the ICAC enquiry. Previously, Deputy Commissioners Steven Pearce & Tara McCarthy were suspended after the corruption complaints, both later returned to their work roles on a six month commission. However on Friday last week, their services were terminated effective immediately.”

We put that to the SES and were told by a spokesperson:

“The NSW SES, like all Government agencies, is implementing employment reforms under the Government Sector Employment Act. This includes restructuring at the senior executive level and assessment of staff for suitability to fill roles. A rigorous merit based assessment process is applied as part of these reforms and has been carried out for the NSW SES Deputy Commissioner position. It will be also applied to the NSW SES Directors positions. As part of this transition process both Ms McCarthy and Mr Pearce were not appointed to the position of Deputy Commissioner.  Both officers have since made the choice to leave the NSW SES. A recruitment process is under way for the position of Deputy Commissioner in accordance with the terms of the Act.”

Lose your job with these easy steps. While most of us know the name Michelle Bridges is related to shedding kilos, a tipster tells us that 12WBT, the company she started to sell weight loss programs, is also shedding staff:

“The company that runs Michelle Bridges 12WBT program has sacked (made redundant) 26 of its 46 staff. The former high-flying muscle flexer started to get somewhat financially flabby when under attack by copycat start-ups. Many of those given their marching orders yesterday have been with the company from its heady start-up days three years ago and have unique skill sets in the industry. 12WBT did not/probably could not impose any restrictive covenants to the redundancies, so it is likely some of the former employees will be bobbing up elsewhere in the industry quick smartish.

“Incidentally, worth noting that Michelle herself is in a ‘Jenny Craig’ position … she has nothing to do with the 12WBT entity that carries her name nowadays except as a front face (and body of course).”

We made multiple calls to 12WBT headquarters over the last 24 hours, and our calls weren’t returned. No one left to answer the phone perhaps?

Immigration jobs going. The ABC’s Melissa Clarke reported today that the new Australian Border Force Commissioner will be Roman Quaedvlieg, but we hear from a tipster that he’ll have fewer people to boss around after today. “Another big round of senior executives getting fired in Immigration today to make room for the final part of the Customs take over,” our source reports. We put that to the Department of Immigration’s media team and were told:

“A recruitment process is currently underway to replace specialist skills where gaps currently exist, providing an opportunity to refresh the leadership cohort and renew the focus required to support the Portfolio. While there is expected to be an overall reduction in SES numbers as a result of consolidation, the precise number will not be known until closer to 1 July 2015. Any reduction in SES numbers will be due to the overall efficiencies arising from consolidation.”

Bernard’s (racy) book. We’ve told you already that our very own Bernard Keane has written a novel, due to be released in August, and after Allen and Unwin’s catalogue arrived in our inbox this morning, we can actually tell you what it’s about. In PR speak, Surveillance sounds like quite the tale:

“Surveillance is the gripping debut fiction with an edge of terrifying truth from Crikey’s political commentator Bernard Keane. It tells of what happens when one of Australia’s big three IT companies hacks into a government account and places information there that creates huge panic … A mile-a-minute novel that reads like it comes straight from tomorrow’s headlines, Surveillance is not to be missed.”

“This riveting, sexy page-turner provides an unsettling and hugely entertaining glimpse into the very near future from a fearless commentator who knows where the bodies are buried!”

We were very proud in the Crikey bunker to see Keane at the top of the list, but we did manage to read all the way to page nine, where Greg Sheridan’s memoir When We Were Young and Foolish is listed. Tony Abbott, Bob Carr, Kevin Rudd, Peter Costello and Malcolm Turnbull all get name-dropped in the write-up: “When We Were Young and Foolish illuminates the formative years of Greg and his friends who would go on to be prime ministers, premiers and senior ministers”.

An affront to Australia. The inclusion of Vegemite in chocolate sounds like an unholy match to us, but of course the anti-halal crowd has a different objection to the assault on our tastebuds. “Double decker halal bomb” reads one comment on this Facebook post, and another calls it “halal laced with halal”. 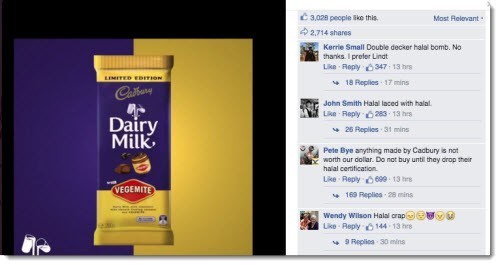 Wool over their eyes. Following Monday’s Four Corners report on the terrible working conditions on farms that supply our major food chains, one of our tipsters wrote to Woolies to say that she wouldn’t shop there until the chain could assure customers they weren’t affected by the issues in the program. This is the response she got:

“Thank you for contacting us, I appreciate the time you have taken to enquire about our sourcing policies and practices in Australia. Our supplier trading terms require that suppliers comply with all relevant laws and support ethical standards with regard to workplace safety, environment, and fair pay and employment conditions. In the event that any alleged breach of laws, workplace or otherwise, are brought to our attention we take those allegations seriously and immediately bring them to the attention of the authorities who can investigate fully and properly.”

We’re not sure what they need more than a 45-minute program for something to be “brought to [their] attention”, but it sounds like heads are in the sand.

Ankle-turning fun. Fun runs for charity are becoming a dime a dozen in Australia, but one tipster has come across a charity run with a twist(-ed ankle):

“Flicking through Malaysian Airlines in-flight magazine en-route Kuala Lumpur to Australia, came across an article headed ‘well heeled’. It was about celebrating women (sic) empowerment in Malaysia and the airline was proud to present Malaysia’s first ever high heel race where participants make a dash for the winning line ‘while wearing said footwear’. “… Women are such an important contribution to the workplace and we are excited to support events like The High Heel Dash that are pushing for that objective. This is the time that you get to run with heels for a good cause and it will be an enriching experience with your friends and family members”, says an Airline VP.”

This doesn’t seem like a good idea to Ms Tips, but it is for real and it’s happening in two weeks:

“Women entrepreneurs make up one-third of all entrepreneurs worldwide. These ladies lead the way for women in other sectors to shatter their ceilings. Your participation in The High Heel Dash will not only help support women empowerment; you will also benefit The Women’s Aid Organisation in their effort to provide a safe shelter for female victims of abuse should you choose to be a fundraiser. And you get to do your part while looking stunning in your favorite pair of power heels!”

According to the website men can show their solidarity by also running in a pair of three-inch heels, and unlike many of the fun runs in Australia, it’s a short distance of only 50 metres. While breaking through glass ceilings means we should all be free to wear whatever shoes we like, we’re not sure about the message here.

Down memory lane. The Adelaide University Student Union is celebrating 120 years of its existence and used this photo of former prime minister Julia Gillard’s graduation to congratulate more recent grads. We hope they are as stylish as J-Gill was back in the day: 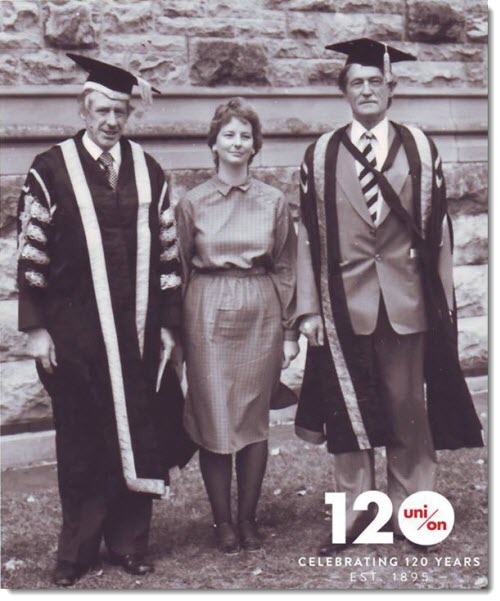 Bernard is MOVING into fiction? He’s been dabbling in it for decades.