Rundle: dashed hopes and a bitter dawn for a progressive UK

Ed Miliband has failed to convince UK voters to entrust him with their country. The question will be: what now? 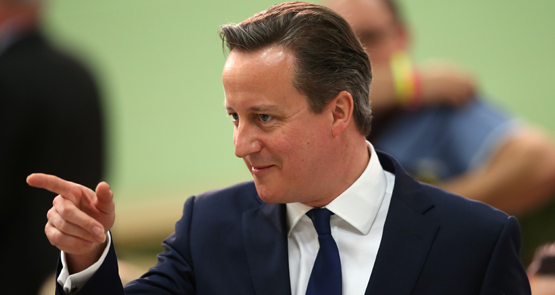 Well, it’s three in the morning in the UK, and the UK electoral system being what it is, we’re only just starting to get some firm results in. There was panic early in the evening when the exit polls were released just after polls closed — and it was said that the Conservatives had stormed ahead, winning 316 seats in the 650-seat Parliament, up from 303.

That panic has been borne out. Even though only 20 seats have been counted, they appear to be bearing out the exit poll results — the Tories are in for a blinding night, taking 310+ seats (up 10), and possibly 320+, or even more, putting them within cooee of a majority in their own right. They will certainly have the right to claim government

The early results were a little encouraging for Labour, with the seats around Sunderland — which always report early — showing a swing to Labour, a boost for UKIP, and an absolute collapse for the Lib-Dems, who went from 5000 votes to less than 1000 and lost their deposits.

But as other seats came in — agonisingly slowly — it started to turn against Labour. A crucial result was Swindon North, a suburban seat, which Labour needed a 7% swing to get. They didn’t need to get it, but they got a 4% swing against them to the Tories.

And that was a bad sign, an indication that Ed Miliband hadn’t pulled it off. Middle-class people in swinging seats hadn’t trusted him and hadn’t trusted Labour to run the economy in a more “responsible” fashion than had been done in 2005-2010.

The real losers were the Liberal-Democrats; the exit polls said that the tsunami had occurred, and they were getting swings against them of 15% and 20%, disastrous numbers. The fact that they were suffering such losses in their so-called fortress seats suggests that there was a mass breakaway to vote tactically — with 70-80% going to the Tories.

By 2am the forecast appeared to be proving correct, with the Lib-Dems looking to have no more than a dozen seats.

The exit polls had forecast that the SNP would get 58 of 59 seats. When Kilmarnock came in there was an audible gasp, with the SNP taking 30,000 votes, a 30% swing to SNP, and a 26% from the Labour Party overall.

By half past one in the morning, Battersea came in, a Tory-held London seat Labour were hoping to take. They didn’t, and though they improved their vote by 2%, the Tories improved theirs by 5%. The Lib-Dem vote was cannibalised by both.

Then Nuneaton came in, and it all came down around us. The suburban seat outside Coventry had been a prime target for Labour — but there was a swing back to the sitting Tory of 3%. That’s enough to seal it, really — across England south of the northern cities, where 40 million people live, they had not bought the Miliband/Labour vision.

Whether out of residual mistrust, fear of SNP leverage or a final rejection of Miliband as a leader, or pure fear, they turned further to the Tories than they had in 2010.

Tomorrow morning, everyone will have to survey the terrain and work out what to do. Labour where to go next, the Lib-Dems how to rebuild their destroyed party, the SNP how to play their straight-flush of a hand — and the Tories how to govern a country that has become divided in a manner beyond that of the Thatcher years. Divided in the sense that one-half of the Union are on their way out of it.

And finally, for the UK, polling is broken, and will not be repaired.

But for those of us who had hopes of a different result, this will be a bitter dawn.

SNP may be the big winner in seat terms, but that is about it.
Cameron/Tories owe them less than nothing, since almost no one voted Tory in Scotland. And that is what they will get (from this revived Tory government) north of the border, NOTHING!
They should have stuck with Labour in Westminster. At least the SNP would then have had some bargaining power. They need to engage in a little strategy – vote SNP in the Scottish Parliament and Labour nationally.
Hope the whole country enjoys the loss of the NHS and other services they have enjoyed for decades. Only fools vote against their own best interests.
Five more years of Cameron (read Thatcher) policies, and life in the UK as they know it will be gone forever!

But Labor would have meant Ed Balls as Chancellor …. a very scary thought.

You have to hand it to the Tories. The way they can convince people to vote against their own best interests is sensational.

“voting against their own best interests”
But are there not occasions when it is the ethical thing to vote against one’s own best interests?
Environmental issues stand out as one field for such a vote – voting for environmental protection that will not be manifested till after the voter’s death. Another one would be a voter who knew he/she had only a short time to live: in whose interests should they vote?

@ Guy, CML, Yclept: never underestimate how desperate and fearful voters can be. Particularly amongst the middle classes and small-medium size business owners, desperate to maintain (or even advance) their wealth and status.