Australian-born and Ireland-based artist John Kelly says our Venice Biennale art is all starting to look a bit familiar ...

“Without the critical faculty, there is no artistic creation at all worthy of the name.” — Oscar Wilde

Here in Venice, the installation Wrong Way Time by artist Fiona Hall has opened in the new Australian pavilion designed by Denton, Corker and Marshall at the 56th Biennale of Art. The new pavilion appears as a simple monolith looming darkly over the canal Giardini with the black South Australian granite camouflaging the obligatory white cube inside. It is stunning.

This exciting new building owes its existence to the indefatigable Simon Mordant AM, who has recently vied with David Walsh as the most “creative” man in Australian art. Both men have the ability to raise multimillion-dollar budgets to build architectural art houses where the public might contemplate the visual.

Whereas Walsh has built an eclectic private museum, the Museum of Old and New Art (MONA) in Hobart, and is pleasing himself, Mordant has collaborated with Australia’s art institutions, notably the Museum of Contemporary Art in Sydney. Since 2012 Mordant has been the official Venice Biennale commissioner, appointed by the Australia Council.

Mordant has chosen Hall as Australia’s 2015 representative artist. Her work has been described as  “characterised by its use of ordinary items and materials, which are transformed into complex and allusive objects”. Hall herself has said her work addresses “global conflict, global finances and the environment”.

It’s a fascinating choice given Mordant is a successful globetrotting investment banker providing advice to major corporations and governments. Many of his clients might be responsible for Hall’s concerns, but Mordant has said: “I accept that I’m not a curator, not from the art world … So I put together a panel of curators.” According to Mordant, Hall was a unanimous choice.

Hall’s selection as Australia’s representative in Venice follows Simryn Gill in 2013 (by Mordant) and Hany Armanious in 2011 by then commissioner Doug Hall, who when opening the exhibition declared “when we look at Australia’s representation in the pavilion it is impossible to think of the chronicle, and not think about recent Australian art because, we’ve never got it wrong”.

Maybe not in Doug’s world. However, given all three artists share a distinct and similar working practice and a strong professional connection it is interesting to ask whether they also are an accurate reflection of this Wrong Way Time that Fiona Hall feels we are in. So before we enter the new pavilion we might look at and try to understand the economics and environment that have allowed Hall’s work to emerge and inhabit this beautiful new exhibition space.

Artists are often accused of repeating themselves, and the fact is we do, it’s natural. Painters often have different subjects, however the underlying composition or aesthetic concerns may remain the same, just as a sculptor will often reiterate forms. The same might be said of commercial galleries whose stable of artists may at first appear diverse, but in reality share many aesthetic and conceptual relationships simply because they have been selected by a singular identity, the gallery owner. In terms of professional connections Hall, Gill and Armanious have, or have in the past, exhibited with Roslyn Oxley9, a commercial gallery run by Roslyn Oxley AO and Tony Oxley AO in Sydney. The artists have not only shared an art dealer but also some working methods.

If I quote from the literature on the three artists we are immediately struck by a repetitive pattern; “Hall deliberately transforms ordinary everyday objects to address a range of contemporary issues…” “Armanious creates duplicates of eclectic, everyday objects…”  Gill’s approach “… to making art involve adapting everyday and found objects…into mordant, yet playful pieces: a Native American (“Red Indian”) head dress, for instance, fashioned from dried chillies…a suit made from coconut shells…” “Hall’s work is enormously popular, partly because of its clever use of everyday objects, from the sardine cans and camouflage materials to knitted unspooled videotape, old Coca-Cola cans or shredded United States currency.”

If one knits together three quotes about the three different artists an almost unified identity emerges; “…  Armanious converts a leaf blower..” “…with cut-up texts shaped to mimic botanical forms like leaves …”  “Leaf litter investigates the interrelationships between the natural world and the commercial world”.

In 2013 Catherine de Zegher, the curator of Gill’s exhibition, responded to her work by revealing what she believed were their environmental and economic concerns that are also being expressed by Hall. They have other similarities; Gill states: “It’s neither possible nor desirable for me to go out and learn every way of doing things from the beginning so the result is that I have found many relationships and ways to work with many different makers, thinkers, fellow artists in arriving at the things I arrive at.”“…Hall is also highly collaborative with people such as her installation team, which includes a cabinet maker, a foundry worker, a retired engineer, a circuitry designer and even a clockmaker…”

No matter how well intentioned the artist might be, the fashioning of everyday objects into art installations shares a conceptual and aesthetic origin with the department store visual merchandiser whose job is also to cleverly raise the everyday object from its ordinariness into one that is fetishised and desired, to make familiar things new.

In trying to understand this obsession with the everyday object transformed, it is fascinating to learn that Roslyn Oxley is the daughter of John Robert Walton, founder of the Australian department store Waltons. Oxley also had a 20 -year career as an interior designer and is considered one of the most influential gallery owners in Australia, supporting the cause of contemporary art. Oddly, Oxley was once quoted in 1993 as saying  “Quite frankly, I’d prefer to sell socks” when talking about the difficulty of selling after the ’80s art boom.

Roslyn and Anthony Oxley “… were awarded medals of the Order of Australia for their service to the visual arts …for their…support of …the Venice and Sydney Biennales”. In 2009, preceding Hall, Gill and Armanious we find two more Oxley artists in Venice representing Australia, Claire Healy and Sean Cordeiro. Their “… practice often involves the recontexualising of everyday objects“. Oxley has stated: “All our artists are very different.”

This uniformity of selection should raise questions with the guardian of the pavilion, the Australia Council. Strangely it doesn’t, even though the council is charged with supporting and promoting our cultural diversity that has been estimated to include 30,000 practicing Australian visual artists and 500 galleries.

It would seem that the Australian Council and a very small number of contemporary and private commercial galleries have turned a continent’s visual arts culture into a country the size of Soudan Lane in Paddington, where Oxley’s gallery is situated.

Mordant, in his recent National Press Club speech, revealed the Biennale’s commercial edge when he said “… the number of great private collections I’ve seen internationally where I heard the owners say they bought the work of our Australian Venice artist directly as a consequence of discovering them through the Venice exhibition.” Nine Roslyn Oxley9 Gallery artists have represented their country at the Venice Biennale according to the gallery’s website.

*Read the rest at Daily Review 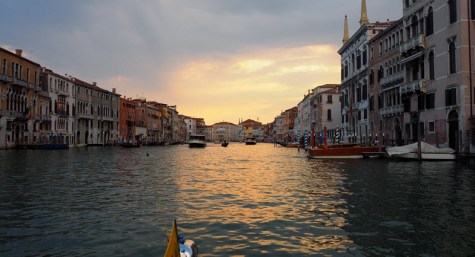 The Australia Council strike, while Oz arts stand out in Italy