The Greens' refusal to work with the press gallery in the way the major parties do means journalistic noses out of joint over yesterday's leadership change. 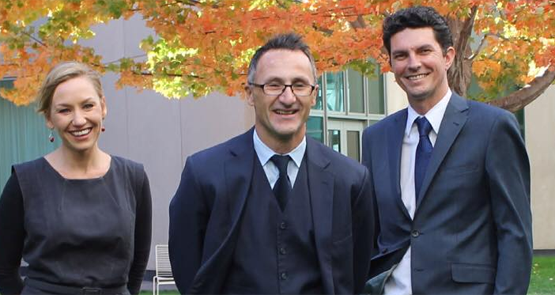 The Greens’ manner of leadership changes definitely puts press gallery noses out of joint. There’s no leaking ahead of time, no destabilisation, no use of the media to push agendas, and no selective drops to favoured journalists. Twice now in the space of just over three years, the Greens leader has, out of the blue, announced they were retiring and the party has conducted a ballot process for a replacement the same day. There’s virtually nothing for the media in it. Indeed, the gallery is left looking a little foolish — gallery journos think of themselves as the critical source of all political information, but the third biggest party in the place blindsided them all on a change of leader.

When Bob Brown retired, of course, Christine Milne (one of the very few people who knew about Brown’s decision) was the heir apparent. This time the next leader was less clear, but the leadership ballot process quickly yielded Richard Di Natale, who stood unopposed. The media fell to working how who were the winners and losers from it all, which is the way the media processes most things in politics.

When Brown retired, a grumpy Annabel Crabb said that the whole process had the “whiff of Pyongyang” about it. Crabb’s no longer in the gallery but remains an insightful commentator on politics as on much else; yesterday she echoed herself, declaring Milne’s departure had “the whiff of Moscow” about it. It’s perhaps overreading Crabb to wonder why Brown was North Korea and Milne is (presumably) Soviet Russia, especially when the relevant whiff is more that of Tarkine rainforest than cabbage, rocket fuel and sub-zero air. But the suggestion of communist dictatorship is fairly clear. Crabb was only the most colourful. Everyone else writing about Milne’s departure also felt the need to remark on the secrecy and tightly held nature of it all. Some felt far more comfortable writing about what it all meant for Tony Abbott rather than discussing Di Natale or what it meant for the Greens. It was particularly amusing watching The Australian, which has publicly called for the destruction of the Greens, try to provide straight reporting of what happened.

The core problem is that the Greens, by and large, don’t engage in the sort of transactional journalism that is the bread and butter of gallery reporting and much of politics in Canberra. Politicians — government and opposition alike — provide information to journalists as part of a transaction in which, the spoken or unspoken quid pro quo is, the agenda of the source is given coverage. Politicians who aren’t willing to provide information to the media risk getting frozen out in favour of those who are prepared to be sources. Journalists who are perceived as unco-operative don’t have calls returned.

There’s nothing innately wrong with transactional journalism as long as both parties and the consumer know what they’re getting, and anyway the best journalists don’t rely on it, even if they occasionally engage in it. But the Greens tend not to co-operate, and it can infuriate hacks. It tends to undermine the personality-based approach to political journalism that so many rely on: the Greens don’t white-ant each other, by and large, but instead focus on policy, which means journalists have to ditch the emphasis on which individuals are winning or losing (cue today’s stories about how Adam Bandt is the “loser” from yesterday) and deal with more difficult issues.

All this will probably change if the Greens succeed in expanding further and the legacy of Brown and Milne recedes into history. But the gallery will be hoping “generational change” in the Greens means a change in their relationship with the media.

Yesterday the MSM also made weird comments about Christine Milne announcing her decision by Twitter, but didn’t report (or maybe weren’t aware) that she first announced it by email to members of the Party, and then social media (Facebook and Twitter) and finally by Press Release to the MSM. Even if Twitter was first, so what? Even Hillary announced “I’m running for president” on Twitter. Suck it up journos, Social Media is not a weird greenie thing, its here to stay.

Annabel Crabb reckons a party that uses grass-roots democracy to elect its leaders and candidates has the smell of dictatorship?

I wondered why Ms Crabb has resorted to wooing our politicians with sweet desserts.. she’s got nothing of substance or even of reality to offer.

I think the Greens have done the right thing in keeping the journalists out of the decision making loop. They can report all they want after the fact, but internal party decisions are not the domain of the public in general but of the party membership. The way the media currently report any internal party politics is destabilizing and does nothing to improve the way politics happens in this country. Any hint of a party wanting
a change of leadership is currently taken as if the party is in total disarray.

In a real democracy changing leader is seen as a good thing, it is what makes democracy work. Only in dictatorships is it taken to be a bad thing. Annabel Crabb is full of it. She’s just put out because there was no chance to fill columns about ‘faceless men’, ‘stabbing in the back’ etc.

RE: Grumpy political journos. Confirms why I wouldn’t bother reading the mainstream press for political insights. “…whiff of Moscow” indeed! Annabel should stick to cooking with her politician friends.

Yep, pathetic sooks!
Crabbs’ whingheing about Co-leaders was really telling. Talk about antiquated and out of touch!
Even more laughable were the lame hacks from the ALP saying look at me, we let the rank and file vote: real democracy in action… Which of course voted for Albo, AGAINST Shorten, but was told to shut up and suck it up.
Things are changing fast, they can try and hold back the tide only for so long.