Australians who speak Vietnamese or Tamil are seeing ads on Facebook from Australian Customs advising them that they won't make Australia home. 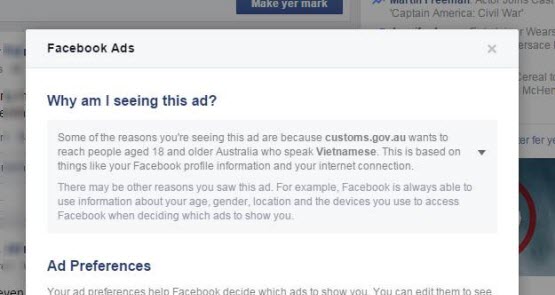 Customs has spent $750,000 since January targeting Australian citizens and residents in the latest part of its advertising campaign to discourage asylum seekers from traveling to Australia by boat. In the past week Australians who have listed Vietnamese or Tamil as languages they speak on Facebook have seen ads from Australian Customs. The ads link to the Customs website, which then offers a list of 17 languages, including Arabic, Farsi, Urdu and Somali, in which to read a warning saying “No way. You will not make Australia home”. The message one user saw was: “customs.gov.au wants to reach people 18 and over in Australia who speak Vietnamese. This is based on things like your Facebook profile information and your internet connection”. The customs page also includes a link with information on “assisted voluntary return” and “stories of returning home”, which includes videos of Sri Lankan aslyum seekers who had returned to Sri Lanka after arriving in Australia by boat.

According to a Customs and Border Protection spokesperson, the advertising is targeting a number of language groups “in ethnic media across Australia including, press, radio, social and search media”. The campaign is part of the Operation Sovereign Borders Joint Agency Taskforce, which aims to reduce the number of people seeking asylum in Australia by boat. The spokesperson said: “Many potential illegal immigrants seek information from cohorts in Australia before committing to a journey. It is known that onshore communities have a major role in influencing offshore communities’ migration decisions by informing them of the current policy and the dangers of attempting to travel to Australia by boat.”

One of the users who saw the ads said they started to appear when they began to add friends from India on the social network.

The department says that the $750,000 figure covers not just advertising costs, but also includes research, translations and “community engagement”.

Dang Duy Ming Nguyen, an Australian of Vietnamese descent who lives in Melbourne, said he saw the advertisement this week, but had also seen similar posts last year. Nguyen said he was offended at being targeted by the ads. “Quite apart from being made to feel quite unwelcome just because I speak a different language at home, it’s really jarring to see how unwelcoming it is towards to people who may want to come here and make a life.”

“When my parents came here Facebook didn’t exist. It’s alarming to think of people seeing these ads and thinking they’ll be tossed back into the sea.”

It boggles the mind. Watch out for the yellow peril. Head up your bum policy.

You must be appalled, Sally, to discover ANYONE would be so devious as to use social media to get across messages.
Perhaps you should launch a campaign to let people know the perils of social media, and the need to seek more credible sources if they want to understand the world a tad better?

Norman, where have you been for the past couple of weeks? We’ve missed you. – Sophie, website producer.

All I can say Sophie, is that if you missed Normie – improve your aim! 😉