On the eve of the election, Crikey's writer-at-large gives you a handy form guide to tell which way the wind is blowing. 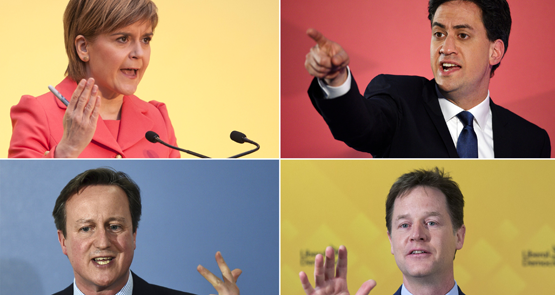 Well, if you’re reading Crikey, chances are you’re a political tragic of the highest order, and most likely have one of those jobs where people don’t really notice if you’ve turned up or not. So you’ll be able to watch the UK election from soup to nuts (UKIP). Polls close at 10pm in the UK, 7am Australian Eastern Time. Nor is there any lightning result: the count goes through to 4am and beyond, so noon-1pm. By then, barring a result way contrary to the polls, we still may not know the story, with disputed results, recounts, postal votes and the collection of ballot boxes in remote Scottish seats.

But if you’re following it, here’s the state of play and the seats to watch:

Sunderland South A safe Labour seat in the north, which is always the first to report results. Usually, the speed with which they do so is more interesting than the result, but the seat will be an early sign of whether UKIP have succeeded in building a northern ex-Labour base.

For a majority — ha! — they need to get seats like:

Gloucester (West), Croydon Central (London), Stevenage (southern), Dudley South (Midlands), Colne Valley (three-way marginal), Warwick & Leamington (this is the Lab-Con median, its 7.3% margin equal to the Tories 7.3% margin nationally in 2010), Dumfires, Clyde and Tweedale (The Tories’ only Scottish seat, an English-infested border seat). Labour gain would wipe the Tories out in Scotland if they did not take others back from Labour

They’d also be looking to gain seats such as Burnley and Cardiff Central from the Lib-Dems.

Bermondsey — possible Labour gain from Lib-Dems. This was the seat taken from Labour by the Lib Dems in 1981 when Labour’s candidate, gay-lib and left activist Peter Tatchell was subject to a vicious homophobic smear campaign by Simon Hughes, himself not only gay, but also high kink.

A Conservative surge would be indicated by:

Hampstead & Kilburn (held by Labour with 40-odd votes), Plymouth Moor View, Walsall South (Labour seats); Solihull, Eastleigh, Cambridge, Colchester (Lib-Dem), Brecon & Radnorshire (Welsh Lib-Dem hold. Mid-rank Tory target. If it fell to them, and there was no net loss of seats to Labour, Tories would be onto a majority).

UKIP gains would be indicative of a rightward shift, but they would also screw up the right’s chance of a commanding largest-party vote. They’re hoping to hold onto the seats of two Tory defectors (who recontested them as UKIP), and gain: Thanet South (in Kent, where leader Nigel Farage is standing. If they can’t win this, the decline has begun) and Thurrock — across the Thames estuary in Essex.

Other gains are less likely but target seats include: Great Yarmouth, Boston and Skegness (both East Anglia/Midlands fishing seats); and another fishing town, Great Grimsby, UKIP’s only realistic Labour target.

The SNP are likely to carry all before them. Key wins would be: Glasgow South (the mid-point of Labour to SNP marginals, i.e. all Labour Scottish seats), Paisley and Renfrewshire South (Scottish Labour leader Jim Murphy’s seat, currently being buttressed by Tory tactical voting), Kirkcaldy & Cowdenbeath (the once ultra-safe seat Gordon Brown is vacating. If that goes, this was a wipe-out).

Plaid Cymru (“No Western Education”) are trying to virtually double their standing of three seats among Wales’ 40, to five. Seats to watch as likely gains: Ynys Mon and Arfon (both Labour), Ceredigion (around Aberystwyth) — if PC can take this from veteran Lib-Dem member, then the nationalist wave is breaking everywhere.

The Greens hold one seat — Brighton Pavilion, the arty/hipster embassy. They’re looking at Bristol West, Banksy territory (and Class War’s old base), and Norwich South around the powerhouse, arty, University of East Anglia as gains, though both are seen as wildly unlikely,

Finally, the poor old Lib-Dems are looking at huge losses, so some retentions count as gains. To watch: Sheffield Hallam (leader Nick Clegg’s seat — likely to survive on Tory tactical votes, but without them, he wouldn’t have and the party would have been decapitated), Caithness, Etcetera (former Lib-Dem leader Charles Kennedy’s old seat — he’s vacating. If they go from here, Scottish liberalism may be finished for decades or evah), Inverness, Nairn, Badenoch & Strathspey (the name is Badenoch, the result might be worse, as Lib-Dem deputy Danny Alexander is likely to go).

Possible gains: the Lib-Dems hope to pick up couple of seats, bless, possibly Cornwall’s Cambourne and Redruth, which would show they had not lost their Cornwall-Devon heartland, and Sheffield Central, which is, bless.

Northern Ireland is too complex to go into. The take-away is that the Democratic Unionist party (Tory-aligned) may get 10 seats rather than eight, taking one from Sinn Fein and one from the neutral Alliance Party. If they hit both, that’s a de facto gain of four seats for a Tory.

Finally, there’s Bootle in the north, the safest Labour seat, and Beaconsfiled in Buckinghamshire, safest Tory seat. Worth a look to see if the vote dips in either place, as a measure of solidity behind the marginals.

So it’s eyes down for a confused result and a full house that has to make it up as it goes along. Your correspondent will be voting Labour with pride and enthusiasm, because it has a courageous leader aiming for genuine and real reform, against enormous forces within and without the party, and because a Tory return would spell the end of the NHS, the sell-off of scarce public housing, and a new wave of misery, violence and suicides from welfare “reforms” to no great purpose.

The choice is stark, and it makes clear the moral gulf between the two parties. But that’s only the beginning. As the SNP take their seats, the UK, the anchor of imperialism and the Atlantic alliance, comes under threat. It deserves to be, though whether it should be broken up is another question. But this year, this election power became fluid, and could no longer be simply dictated. The polls indicate the country has moved leftward; the result will be a situation in which the Union must come into question. Whichever way you look is good.

This is an election in which both Lynton Crosby and John McTernan may lose simultaneously. Here, as in Greece, as elsewhere, is where it turns, and people show willingness to take up the possibility of real renewal. For the sake of the poor, the sick, the badly served by school, and everyone else so afflicted, it had better be.

hurrah. a celebration is in order.. with a spot of something malty in one hand and a bag of something crispy in the other.

What a surprise! Rundle is voting Labour. Blows me away. But his commentary is sound- just doesn’t support his conclusion.