Abbott presides over a lost year on infrastructure

Despite proclaiming himself the "infrastructure Prime Minister", Tony Abbott has wasted 20 months as construction falls. 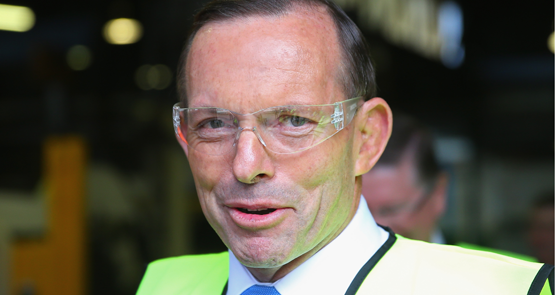 It’s forgotten now, but the government used to make a great deal of noise about infrastructure. Tony Abbott repeatedly declared he would be an “infrastructure Prime Minister”. On his budget night speech last year, Treasurer Joe Hockey boasted that he would fund “the equivalent of eight Snowy Mountains Schemes in new infrastructure over the next decade”, because he had “significantly increased” infrastructure investment in an “Infrastructure Growth Package”. The government was backed by many economists, who thought the government should be taking advantage of low interest rates and Australia’s strong credit rating to borrow for infrastructure projects that would boost activity as the mining construction boom slowed down. “Shovels will start moving within a matter of months,” he promised, issuing a budget glossy claiming over one-eighth of a trillion dollars in infrastructure spending. 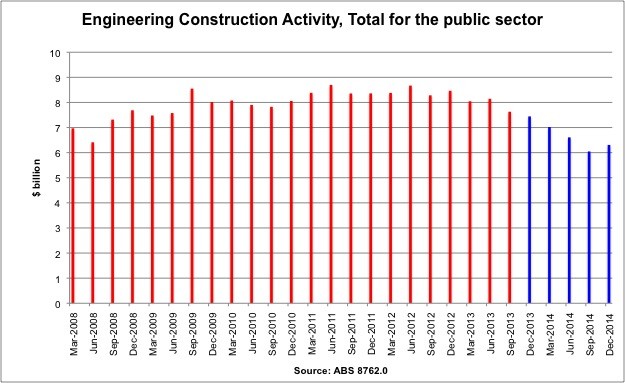 Some factors in the collapse were beyond Hockey’s control: despite his innovative asset recycling scheme, for which Hockey and NSW Premier Mike Baird deserve considerable credit, state governments under fiscal pressure have been curbing infrastructure spending. Public sector engineering construction in Queensland, for example, fell more than a quarter in 2014 from 2013 levels. But part of the problem was that, as even The Australian acknowledged, much of the government’s grand infrastructure package was simply the reannouncement of funding already allocated by Anthony Albanese where he was Labor infrastructure minister (Labor, of course, are past masters of reheating old announcements themselves when in government).

And where was Infrastructure Australia, the independent body intended to vet major infrastructure projects, in all this? Before the election, the Coalition talked at great length about its plans for IA, which was established by Labor in 2008. “The Coalition will retain and strengthen the role of Infrastructure Australia, to create a more transparent, accountable and effective advisory body. It will be tasked with developing a 15-year plan for Australia’s infrastructure needs (revised every three years) and a benefit:cost analysis will be published for all major projects exceeding $100 million in value,” the Coalition’s infrastructure policy claimed. Twenty months into the Coalition’s term, there’s no public 15-year plan, despite it being due in April. And instead of published benefit:cost analysis for all projects over $100 million, there were just two published project assessments in 2014: an early-stage assessment of WestConnex in Sydney and an assessment of a Tasmanian irrigation scheme.

What IA has been doing a lot of is recruiting and restructuring, with new legislation for the body passed last year — which initially curbed the independence of the body before being amended — new governance arrangements and a succession of acting and permanent CEO appointments. Otherwise, the lack of activity within IA parallels the steady decline in infrastructure construction across the country.

For Abbott, “infrastructure Prime Minister” ambition came down not just to a focus on road-building — the Coalition simply doesn’t believe the Commonwealth should fund urban public transport, a legacy of the hold of the Nationals on the portfolio, which has been seen as the biggest of pork barrels for spending money in regional electorates — but to one project. In his annual “Infrastructure Statement” to Parliament in October, Abbott spoke in glowing terms of the $7 billion East West Link project in Melbourne, declaring “there can be no turning back from this major project”. Just over a week later, Abbott insisted the coming Victorian election was “a referendum on the East West Link”. After Victorian Labor won that election, Abbott decided to ignore the “referendum” result and demanded that new Premier Daniel Andrews break his commitment not to proceed with the project.

Andrews copped plenty of criticism for paying $400 million in compensation for the dead project, but saved taxpayers a state contribution of $2 billion and a Commonwealth contribution of $1.5 billion. Moreover, the project would have in effect wasted at least $1 billion, since it had a benefit:cost ratio (BCR) of 0.84 even under the Napthine government’s own, overly generous assessment. An earlier assessment showed the project had a BCR of 0.45 — that is, for every dollar spent on the project, the resulting benefits would have been less than 50 cents. Taxpayers would have been better off sticking the money in the bank, even at current interest rates.

Compare that to some of the Victorian projects assessed by Infrastructure Australia in its last Infrastructure Priority List, in December 2013. On a league table of worthwhile projects, East West Link is a wooden spooner. The Melbourne Metro rail tunnels: BCR of 1.2 for a $9 billion to $11 billion project. The $1 billion M80 Ring Road upgrade, BCR of 2.2. The Monash Freeway upgrades ($150 million), BCRs over 5. In fact, even using the confected 0.84 BCR, the East West Link has a far lower BCR than any project anywhere in Australia on IA’s “Threshold” or “Ready To Proceed” project lists.

The infrastructure Prime Minister’s biggest effort has thus been for a project that, despite simply not adding up, has been hyped for partisan reasons, in a desperate effort to prop up a state conservative government that his own politically toxicity doomed. With the lack of any meaningful output from Infrastructure Australia and the dramatic decline in infrastructure construction across the nation, it marks a lost year in infrastructure at a time when the economy would have benefited from a significant Commonwealth investment in new projects. Will 2015 be any better?

Infrastructure is all about “the near-in suburbs” !! What about having “urban” transport like that in Victoria where I can live in Deniliquin and commute to work in Bendigo ? No real full on attempts to engage in long term transport which will make better use of rural water supplies and drainage plus value up land and houses in country towns. Cities are now full up and serious efforts at decentralisation are here and now. Why do government departments exist in the city ? Example, Ballarat or Horsham ?

“Non-core Promises/No surprises, no excuses – adults in charge” government.
“The Howard years”? Where are those leaners now? “The Abbot error”?
[P. pardus – it’s in the blood, and the spots.]

It would be nice to see Abbott acknowledge that he is not the infrastructure Prime Minister stop wearing those fluro vests.

Ironically, the one infrastructure project that Australia needs arguably more than any other – the National Broadband Network – the current government has managed to dismantle altogether.

PS: Anyone else notice that their ADSL speeds have nose-dived since Netflix started operations? Maybe it’s a coincidence, then again …

It isn’t Graeski – the demand Netflix usage places on our infrastructure is intense, higher than gaming traffic.