Outgoing chief David Thodey turned Telstra from a poisoned chalice to a corporate success, executing one of the most remarkable stints in Australian blue-chip corporate history. 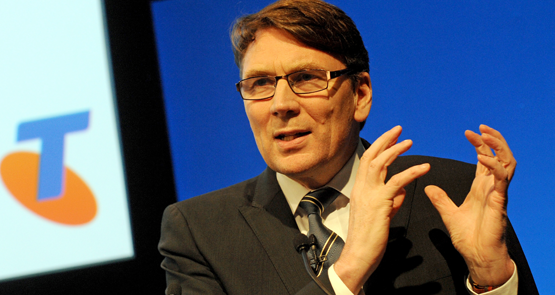 Telstra’s just-retired chief executive, David Thodey, could not have asked for a better farewell gift.

Only days before the Telstra chief executive was due to step down (as he did at midnight last night) junior telco M2 launched a rival $1.6 billion bid to TPG Limited’s $1.4 billion takeover offer for Perth-based fixed broadband provider iiNet.

Far from being concerned about another major player in the market, Telstra will be thrilled that its competition has become embroiled in a bitter takeover battle — there’s nothing quite so distracting for management on both sides, and in this case all three sides.

Once the acquisition by the lucky bidder is complete, the thorny task of integration must begin, and anyone who remembers any telco mergers will know that this is when competitors, especially larger players like Telstra, go full tilt at picking up the cream of disaffected customers.

Memories of iiNet’s troubled acquisition of Ozemail’s rump, Australia’s first home-grown ISP and the source of much of Communications Minister Malcolm Turnbull’s wealth, should loom large in the minds of M2’s executive director Vaughn Bowen and TPG chief David Teoh.

Once that’s all done, an even bigger big question looms: can the market’s new No. 2 survive in the multi-device broadband world without a mobile network play? Both iiNet and M2 run small virtual mobile networks using the infrastructure of others, but these simply cannot cut it at the applications integration.

The mobile network industry’s perennial No. 3, mobile network, Vodafone Hutchison, is such an obvious target for a merger — or vice versa — it seems slightly embarrassing to posit that as even a vaguely original thought. But within that inevitable, subsequent will-they-or-won’t-they uncertainty lies a further round of distraction.

On any measure the uncertainty among his competitors can only burnish Thodey’s considerable legacy even further — even if Singtel Optus is finally starting to lift its game.

And there’s no other way to say this except that Thodey has executed one of the most remarkable stints in Australian blue-chip corporate history during his six years in Telstra’s top job. He’s more than doubled its market value and has not only restored its tattered reputation but improved it.

He inherited the company almost by accident after his predecessor, the aggressive American import Sol Trujillo, who wreaked havoc on so many levels, was pushed out.

Affable and incredibly measured in public, Thodey was tarred with that most backhanded of compliments in corporate circles — that he was too nice.

Too nice, perhaps, to succeed in the cut-throat world of Australia’s former monopoly telecommunications company, which had chewed up and spat out its two previous chief executives Trujillo and his predecessor Ziggy Switkowski. Maybe he is nice, says Thodey, but he prefers to say he respects other people.

By the time Thodey took the top role in 2009, there had been close to a decade of turmoil in Telstra’s board and management ranks, kicked off by the unexpected ascension of the outsider Switkowski as Telstra was being buffeted by the first wave of the “dotcom” revolution that continues apace today.

Thodey inherited a company where government relations were at an all-time low, and the company’s staff was in a funk after four years of being taken advantage of, spied on and jerked around by Trujillo, his three amigos and dozen of overpaid cronies.

Telstra’s customers, promised a new world of service by Trujillo, were also complaining in ever larger numbers and voting with their wallets. And shareholders were in a whole world of pain: under Trujillo the group’s share price has been shredded, with more than $25 billion wiped off its market value, and there was worse to come. Thodey was handed a poisoned chalice.

It would take at lest six months before the government, bruised from years of abuse by Trujillo, would even engage with Thodey, but eventually he would strike a canny, sweet deal for his shareholders —  with two governments in succession — in order to quietly make way for the benighted National Broadband Network.

With the careful, sometimes painful deliberation some predicted would be his downfall, Thodey rebuilt Telstra’s senior management team, restored staff moral and — perhaps his signal achievement — turned its perennially awful customer service on its head.

Eventually, Telstra’s share price began to respond, climbing through the $3, $4, $5 and, almost impossibly, $6 marks on the back of swelling customers numbers, vastly improved margins, and even a small boost to the dividend.

Thodey — appropriately– delivered his farewell public speeches in Singapore on Wednesday, the hub of the company’s latest Asian strategy, which he hopes will seal its future as a strong regional player. In his speeches, he didn’t dwell on what can only be described in Keatingesque terms as a beautiful set of numbers.

Instead, he talked about the accelerated rate of technological change and the disruption that it is bringing to every business in the country and the importance of corporate reinvention.

And he saved his strongest critique for the what he sees as the disturbing lack of a culture of innovation in the country and his concern about the timidness of corporate Australia, with only a handful of exceptions, in Asia.

Most refreshingly he admitted that he didn’t pretend have all the answers. But glancing at the scoreboard, he certainly has had more than most.

It’s a great model to follow. Find a company that has been run by an ineffectual academic type, followed by an incompetent and loudmouth yank (thanks for that great appointment, John Howard) and when you get there quietly go about delivering the things you are supposed to, like a working phone and internet service.

Then, stop treating the customer as a mug and talk to the politicians that regulate your industry.

One of those occasions that looked like a poisoned chalice but was really just a greenfields site with so many areas to improve on.

And while he has done extremely well, let’s remember those things that have favoured him. The NBN, the first deal with Stephen Conroy was a good one for Telstra, and Australia. Then getting Malcolm Turnbull to pay more for less was even better for Telstra, and terrible for Australia. And finally, recognition that the share price has been helped enormously by the fact that reasonable returns on investment at low risk have never looked so good. A mature business with low growth prospects would have been hammered in the share price a decade ago. Since the GFC, a mature business paying regular dividends to retiring baby boomers has never looked so good.

There was a bit of luck as well as good management.

Trujillo V Thodey is a metaphor for the difference between the way Australians and Americans operate.

I think you’ll find Telstra pre-Thodey was more a creature of the board than the CEO, with the difference between Ziggy and the Three Amigos being that with the latter the board just had to sit back and laugh.

In those days the joke was:

What’s the similarity between being a Telstra employee/customer and hitting one’s self on the head with a hammer?

It feels so good when you stop.

Good bye and thanks for all the fish, not! Nice guy if you consider when I pointed out to him he was screwing the workers during a renewal of a pay agreement, his response was that he was not paid as much as previous CEO. Seeing his salary per year could only be dreamed about being received by many of the workers in their lifetime. My impression of him was I’m all right Jack, with no consideration for the workers.
Telstra would basically have performed pretty much the same without a CEO and saved what has been paid to Thodey.

I thought the age of ceo Worship was over? I wonder how many mobile phone subscribers this guy is worth?