The Tories would like to keep Scotland in the union, but they'd prefer the Scots stayed home on polling day. 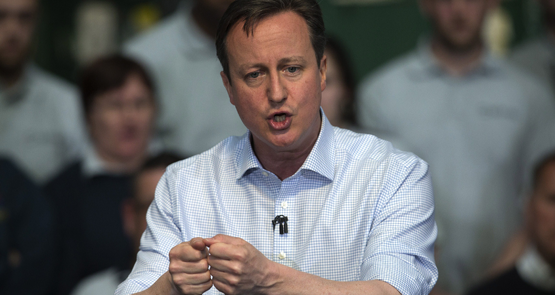 There’s general agreement that next week’s British election is going to be the one that breaks tradition of a system able to deliver clear-cut results.

William Bowe in Crikey yesterday described the country as a square peg in its electoral system’s round hole; Patrick Dunleavy at The Conversation said the impending result amounted to a refutation of Duverger’s Law.

To understand what’s going on here, it’s necessary to start with last year’s Scottish independence referendum. Scots voted against independence, but the “yes” vote was a respectable 44.7%. It’s not surprising to find that that’s a good fit for the Scottish National Party’s vote in the last Scottish election (in 2011), 45.4%, given that it was the only major party supporting independence.

The anomalous figure, until now, has been the SNP’s vote at British elections: in 2010 it managed only 19.9% in Scotland, which equated to 1.7% in the UK as a whole.

But now, whether due to the referendum or other causes, nationalists are evidently bringing consistency to their voting behavior: by the start of the election campaign, opinion polls had for some months been showing a SNP vote in Scotland in the mid-40s.

And under first-past-the-post voting, with three different opponents, 45% or so of the vote will win you a large majority of the seats.

SNP gains will mostly come at Labour’s expense, since it currently holds most of the Scottish seats. And since the SNP is also on the left, it’s a natural fit with Labour as a coalition partner.

As I said earlier this month, even from an anti-independence point of view, “there’s never been a better time to bring the SNP into government”.

In last month’s Israeli election, Prime Minister Benjamin Netanyahu outperformed expectations by means of a last-minute scare campaign based on the idea that Israeli Arabs (who of course are citizens with full voting rights) were voting in record numbers, and that it was necessary for his Likud supporters to turn out to counteract their influence.

Implicitly, the message was that Netanyahu’s centre-left opponents might form government with the support of Arab parties (never a likely prospect) and that this would be illegitimate and un-Israeli.

Britain may seem a long way from the conflict-ridden Middle East, but the Conservative Party’s rhetoric in relation to the SNP has distinct echoes of Netanyahu.

With not much else going its way, the Tory campaign — masterminded, it’s said, by Australia’s own Lynton Crosby — has seized on the Scottish issue, forcing both Labour and the Lib Dems to disclaim, in increasingly explicit terms, any intention of relying on SNP votes.

The argument is that a government dependent on the SNP would be illegitimate — in effect, that the views of Scottish voters don’t count (unless they vote for English parties) and shouldn’t be part of the calculation of who gets to form government.

It’s what the Tories argued in the early 20th century in relation to Irish votes.

The last few days’ worth of polls suggest that the Tory strategy is having some impact in England, maybe pulling back a couple of percentage points of support from Labour and/or the UK Independence Party.

But it’s also having an impact in Scotland. Scottish voters, unsurprisingly, don’t like being de-legitimised, and their reaction has been to swing even further to the SNP, which is now recording more than 50% of the Scottish vote — raising the prospect that it could win every one of Scotland’s 59 seats.

The Tories have always faced a paradox in relation to Scotland (as a century earlier they did with Ireland): their political ideology was based on keeping the Scots in the union, but their political interest would be better served by having them leave.

And the more they stressed the unionist ideology, the more their electoral fortunes in Scotland declined, and so the stronger their contrary political interest became.

Cameron’s rhetoric is an attempt to square that particular circle. But by defending such an exclusive sort of nationalism — just like Netanyahu —  he’s potentially hastening the thing he claims to be fighting against. He’s helping to destroy any loyalty the marginalised group might feel to the “nation” — which of course isn’t really their nation at all.

If the strategy somehow delivers Cameron a majority, there will undoubtedly be a push for another referendum in Scotland. But if, as seems much more likely, the SNP emerges with the balance of power, the English parties are going to have to learn to deal with that.

Part of it actually reminds me more of the talk that happens here about the Senate and, from 2010-2013, the House of Representatives. Australia is apparently “ungovernable” unless one side of politics is given carte blanche to do whatever it wants, even if the majority of the electorate actually voted for parties that stood for doing the exact opposite. In particular, because SNP/the Greens/PUP/independents/et al aren’t the two main parties, then they are to be considered political untermensch and their views (and those of their supporters) don’t deserve to be considered. So I suspect that the influence of Lynton Crosby is strong with this line of attack.

I must say that, as a Greens voter, I don’t take to kindly to big party politicians declaring MPs and Senators who represent my views and interests in Parliament as “unrepresentative swill” or “feral”. It certainly does nothing to encourage me to change my vote to the ALP of Libs. Dare I suggest that such attitudes towards the SNP will also only strengthen their support among their voters.

Sean – all that is fine, but I object to these ‘minor’ parties running the country. Take the Greens, which you support, they never get more than around 15% of the vote in any election (nationally/state). Yet once they hold the balance of power, they effectively become the ‘policy deciders’.
That is undemocratic, when some 85% of voters did not support their views. That does not mean their/your views should be ignored, but in the case of the Greens, for example, it is either their way or the highway. So nothing gets done about the most important issues.
So whether it is the Greens here, or the SNP in the UK, what you end up with is deadlock, and the country becomes ungovernable.
Not a good outcome for Australians as a whole, and precisely what is going on in Canberra at the moment. However, I hasten to say that I do not support the current government’s policies, but do think that a majority government from one of the major parties (in the Reps or Commons) is far superior to a ‘tail wagging the dog’ scenario.
And I do understand that our problem in Oz, at present, is in the Senate.

Currently in the Senate, of the 76 seats the Coalition has 33 members and the ALP has 25, a total of 58 of 76. Of the other 18 seats, the Greens have 10. But somehow it’s the Greens and the independents who are running the country?! Remember that the Greens can’t block or pass anything on their own. They need one of the two major parties to support them. That’s not my political bias, that’s just basic maths! So if the ALP and the Greens + at least 3 others oppose something, for example, and they represent the views of about half the electorate, then I fail to see the problem. What CML seems to argue is that for pluralism, where the Coalition, having got 40-45% of the vote in the last election, should be allowed to become the policy deciders despite 55-60% of voters rejecting their views.

Remember that Gillard had to work with independents and the Greens in both houses and still managed to get through several major pieces of legislation through. The reason why Abbott can’t get anything through is that his policies are rubbish and he simply can’t negotiate. Indeed it’s curious that CML criticies the Greens for being my way or the highway when Tony Abbott is in some ways the personification of this. His bullying and arrogance is exactly the opposite of what the Coalition needs to negotiate in the Senate. They seem to have slowly come around to the reality of the situation of the Senate, but I think they’ve probably burnt too many bridges to turn it around.

Thanks Sean – I think you’re right about that. If I’d had some more space I would have pointed out the way in which the Tories’ tactics, in addition to trying to scare up votes now, are also designed to lay the groundwork for de-legitimising any Labour/SNP government, in much the way that Tony Abbott and News Ltd did with the Gillard government.
CML, I’ve got no problem with the desire for stable single-party government, but I don’t like the idea of the system imposing that when people haven’t voted that way. If you want that then you should go for something like the Italian system, where parties can join up in alliances beforehand and then the alliance that gets the most votes gets a bonus allocation of seats to give it a majority.

CML exemplifies the common lack of understanding, constantly yelled by the shoutjocks & mudorc scum, when complaining that Greens (or any other than T1/T2) decide legislation.
Simple arithmetic shows that is not correct – unless the opposing party also votes against/for legislation the Indies are powerless.