The UK election is almost upon us. Which means it's time for the really dumb campaign stuff. 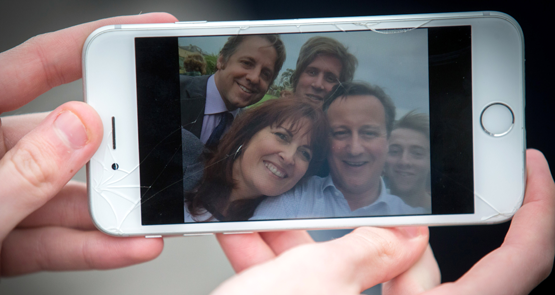 UK PM David Cameron poses for a selfie with supporters

Well, we appear to be at the spring 1917 stage of the UK election, with all parties dug in and lobbing shells at each other, fresh out of ideas and trying to keep their ragged troops in line. The more each side fights the other to a draw, the less relaxed anyone is about the result. For Labour and nationalist party supporters, a clear Tory victory would plunge the country into levels of suffering and inequality not seen since the 1930s and privatise the remains of the British welfare state; for Tory supporters, Labour would take the country into economic crisis afresh, and be hostage to the Scottish Nationalist Party. Ed Miliband’s program is pretty mild and is still a social market one, regulating and supplementing market forces, and putting the brakes on further privatisation, and with only a mild nod to the possibility of railway re-nationalisation, and suggestions that it is the most left-wing agenda for 70 years is absurd (in 1974, Harold Wilson was running a country that was 45% state-owned and planning to extend this to new areas), but that’s how many conservative-minded people are starting to view it. By contrast the Tory program — the real program — is a continuation of the Thatcherite program that Thatcher herself could never complete.

By the end of last week, things were looking pretty good for Labour, with the Tories making one unforced error after another, culminating in what appeared to be a moment at which PM David Cameron forgot the name of his football team. Tory spinners appeared to have chosen Aston Villa for him, a non-descript Birmingham mob, middle-class and Midlands. But Cameron signed off a speech about diversity bollocks with “You can support any team you like (but I hope you support West Ham)”. Judging by Cameron’s reaction to his own words, read from an autocue, this appears to have been a joke by a speechwriter, portions of whose skull washed up on rocks at Scapa Flow yesterday. But “Cameron forgets own football team” went round the sphere while the truth was still lacing up its cleats. The gaffe — disappointingly no one called it Turnstile-gate — seemed to fit in with everything everyone wanted to believe about Cameron, puffy PR man in politics, made worse by Cameron’s attempt to pass it off as forgetting (rather than of reading like an automaton) that he had had a moment. Yeah, because everyone forgets what football team they support. Rejoicing by Labour — some thought that this had lost Cameron the election — was a small measure of just how patronising its grandees could be: no one is really fooled by politicians’ football antics, at the conscious level.

Turnstile-gate had come the day after the Tories had wheeled in their big gun — Boris Johnson, sent on the road with Cameron, to appear at a kindergarten. The spectacle of two men in blue ties sitting at a tiny table playing Play-Doh with small children is pure Private Eye fodder, but judged as worth it for the women’s vote for reasons that garrrrgggghh. The PR triumph was undercut only by the fact that the Prime Minister and the prime minister after that couldn’t solve a piece-together puzzle about the four seasons, designed to be solved by five-year-olds. “Just jam it in,” Cameron was eventually told by Boris, while the teacher tried to steer them from this less-than-great lesson for small children onto finger-painting. Not a triumph, especially as Boris had re-entered the campaign saying of course he’d like to be Prime Minister.

Furthermore, Labour had got the most unlikely of all boosts as Ed Miliband had emerged as, of all things, a sex symbol, the Miliband battle bus having landed in the middle of a screaming hens’ party. The idea that Ed might be sex symbol had been inadvertently started by a Daily Mail sting so extraordinarily lame that even the Tories wouldn’t have passed it as fit for work: the revelation that Ed had met his wife, Justine, at a dinner party but had not revealed to her that he was having a thing with the woman hosting it . Miliband in “had girlfriends” shock! By the time the hens’ party came round, he was being seen as primo safe crumpet, with teen girls — i.e. 22-year-old interns in Labour HQ basement channelling their 15-year-old selves — tweeting that “if I met Ed I would just die”, “he’s so dreamy”, “is David Essex still alive”, etc.

By Monday Ed was alpha male, a prop to younger bros everywhere, and hammered it home with an appearance on a Sunday politics show, sat on the same couch as Boris Johnson, who revived the abandoned meme that Ed had “stabbed his brother in the back” line, to which Ed replied: “Is Lynton Crosby telling you to say that? You really shouldn’t be listening to Lynton, Boris,” etc, etc. Fake football teams, swooning women and Lynton as an official punchline — it all appeared to be going Labour’s way.

That was crimped somewhat by two polls showing the Tories three points ahead — 35%-32% — before furious meta-debate broke out as to whether Ed Miliband should have done an interview with politically committed but total tossbag Russell Brand. Then quarterly economic figures were released, showing that the economy is sluggish, with only 0.3% growth, and a collapse in the construction industry, which was seized on by both sides as a reason not to vote for the other. But nothing seems to move anything much, which means that the Tories would most likely gain around 280-285 seats, Labour 270-275. Add 45-50 SNP seats to Labour and 7 miscellaneous, and 8 DUP and 2-4 UKIP to the Tories, and the latter fall short, possibly even with 25-30 Lib-Dem seats. Yet the incumbent PM will have the first go at making government. Should that hold, there will be days and weeks of the sort of crisis we are told this voting system minimises. Just like that war. Mud, blood and it’s all in the aftermath.

Whatever happens next Thursday, the sadly inevitable outcome is that a child will occupy 10 Downing Street and will have the delusion that he has the gravitas and merit to actually be there.

Taking time to form a government and testing it on the floor of the lower House is surely not a ‘crisis’. Belgium took months to form a government after its last election and Israel still hasn’t formed a government yet. But none of these countries seemed to suffer any crisis or indeed any marked departure from their government business as usual, however well or poorly that may be conducted.

The Cameroon is becoming desperate and Millipede seems determined to snatch defeat from the jaws of,if not victory, then not utter obliteration.
Over & over, the most common view expressed by hoi polloi on BBC R4/5 is ‘not gunna vote/neer have,never will” which to Oz ears is just beyond cretinous.