India ramps up earthquake relief, with fear a constant companion

India has lost almost 100 people in the weekend's earthquake, with the government focusing relief efforts on helping devastated Nepal and its own poorest states. Alys Francis, freelance journalist in India, reports. 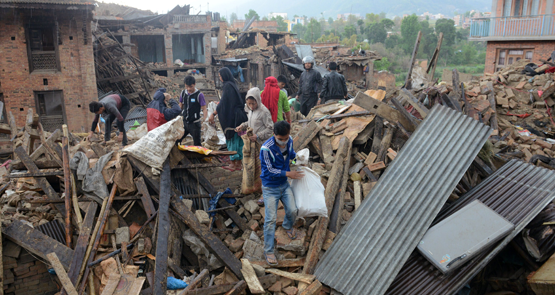 The ceiling fan is swaying, my chair rocking beneath me as if I’ve struck choppy water on a ferry. It feels like it lasts a minute, during which time we debate going down to the street.

We don’t trust our five-storey concrete apartment block in India’s sprawling capital of Delhi will hold together. Not with the building standards here.

Moments later we get news a 7.8-magnitude earthquake has slammed Nepal and shaken states across northern India. Now three days after what was the worst earthquake to hit the region in 80 years, officials say the death toll has surpassed 4000 in Nepal, with at least 6800 injured.

India’s government has counted 72 dead and nearly 300 injured across the worst-affected states of Bihar, Uttar Pradesh, Sikkim and West Bengal.

Bordering Nepal to the south directly below Kathmandu, Bihar bore the brunt of the quake in India. At least 57 people have died and 175 were injured as hundreds of buildings and homes collapsed across the capital, Patna, and towns in the north-east.

Many families in Patna spent Sunday night sleeping outside in the open as aftershocks jolted the region, with rumours of another earthquake about to hit India spreading via text message and stirring panic.

“One person died when a broken structure fell onto them,” Allen Clarence of Bihar Inter Agency Group told Crikey while surveying the damage in Patna as part of Indian NGO efforts to co-ordinate relief on Monday.

The worst-hit districts in Bihar also happen to be some of India’s poorest, according to Clarence, who said: “Here the basic living is farming and fishing, definitely these are not rich people.”

Bihar is one of the least-developed states in India, ranking third lowest on the government’s Human Development Index, out of the country’s 29 states and seven territories.

“Many houses in rural areas have developed cracks, and mud houses have fallen down,” Chowdhury said.

A further two people were reported dead in West Bengal, where 40 children were also injured, stampeding to escape shaking school buildings on Saturday, which is a half day for Indian students.

Another nine were injured in the Himalayan state of Sikkim, nestled between Nepal, Tibet and Bhutan, where the initial earthquake triggered landslides. And one died in Rajasthan.

Delhi responded soon after the earthquake hit on Saturday, sending relief teams with helicopters, medical staff, food and water to Nepal and the worst-affected Indian states.

The government’s capacity to provide emergency assistance for the country’s 1.2 billion people and those in neighbouring countries has grown vastly over the past decade, thanks to both strong economic growth and the Disaster Management Act, enacted after the devastating 2005 Boxing Day tsunami.

The government has since overtaken NGOs as the first at the scene. “India has a growing capacity now and awareness of the need to support relief and recovery,” said Save the Children India’s national media manager Devendra Tak.

Stranded tourists are being assisted at the Nepal-India border, where camps have been set up, while India’s Union Home Minister Rajnath Singh has instructed the Bureau of Immigration to give “gratis visas” to travellers looking to leave via Delhi.

Relief efforts were being hampered by continued strong aftershocks and stormy weather across Nepal and northern India late Monday night. And officials fear the number of casualties could rise when rescue teams manage to reach remote mountainous areas of western Nepal.

Kathmandu remains on tenterhooks. Speaking from his house near the airport, Birat Thapa told Crikey many people were preparing for another night sleeping outside.

“The older portions and heritage sites of Kathmandu have been destroyed, and people here are still out in the open scared to go back to their houses,” Thapa said. “The situation is still tense.”