Blaming an Arab: Julie Bishop’s guide to the War on Terror

In Julie Bishop's version of the War on Terror, Islamic State was caused by the Arab Spring and has nothing to do with western intervention in the Middle East. 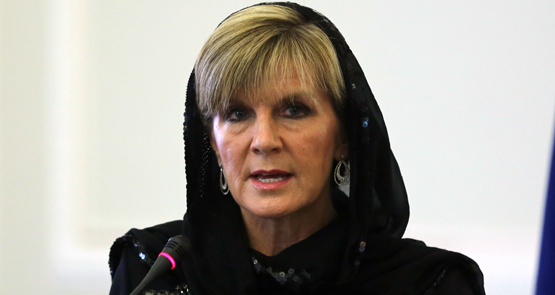 One of the core characteristics of the War on Terror, apart from its endless, and self-perpetuating nature (recently confirmed by the head of the CIA), has been somewhat overlooked: the need to constantly ramp up the rhetoric about the latest terror threat in order to justify ever greater powers for security agencies and ever more expenditure on foreign interventions.

Last year we noted that the unfortunate George Brandis, presumably not understanding what the word meant, had taken to describing the terror threat from Islamic State as “existential”, referring not to the philosophy of Kierkegaard, Sartre, Camus and others, but in the sense that IS threatened our very existence. As IS (sometimes called Daesh) is a group that, by its own admissions, is only capable of killing small numbers of Westerners or even single individuals rather than the mass casualty attacks planned and implemented by al-Qaeda, this was something of a stretch even for a government hyping national security for political advantage.

Last night, though, Foreign Minister Julie Bishop went much, much further in a speech to the Sydney Institute that should be closely studied, for it contains pretty much every aspect of the War on Terror mythology, but recombined and bolstered with new additions that results in a trip right through the War on Terror looking glass.

For Bishop, IS isn’t merely an existential threat; she leaves Brandis far behind on this point. IS is a more significant threat, she says, than the “rise of Communism and the Cold War”. Never mind that the Cold War came close on at least two occasions to the extinction of humanity — an actual “existential” threat, in the Brandis sense — or that the proxy wars fought as part of the Cold War cost hundreds of thousands of lives, and millions perished under Communist dictators from Russia to China to Cambodia. Apparently IS is a greater threat, one that “challenges the very foundations of nations”, with Bishop namechecking the Treaty of Westphalia in the 17th century. Not merely the greatest threat of the last hundred years, but the greatest in 400 years (for much of which, by the way, a brutal Muslim regime controlled large swathes of eastern Europe, but anyway).

Bishop goes further still: IS is “an organisation that is building increasingly sophisticated transnational networks that would rival a multinational corporation; utilising the latest in technology and weapons that would otherwise be the preserve of governments”. It’s not quite clear what weapons normally the preserve of governments that IS has access to — presumably not knives and guns that are the staple of its Western attacks. Perhaps she means the Humvees and extensive US weaponry that IS got access to when the corrupt Iraqi Army — including those so successfully trained by Australian forces under John Howard — turned and fled from them. Or perhaps the US weapons provided to the fictional “moderate rebels” in Syria that were passed straight to extremist Islamist groups like IS.

But let’s not get caught up in detail. Bishop offers more analysis on IS: she invokes former ASIO head David Irvine’s legendary line about internet terrorism, warning “Da’esh is recruiting in our country, reaching into the homes of our citizens, radicalising our young people online.” She namechecks the possibly entirely fictional “feared Khorasan Group”. She invokes our new friends, the Iranians, who describe IS as a metastasising cancer. Unlike Kevin Andrews, she at least knows the name of the IS leader (who may or may not have been killed or injured in an airstrike recently). And she discusses its funding. “ISIL targeted economic assets including oil fields selling oil on the black market to provide a source of income. It supplemented this income by looting banks, extortion from kidnappings, people trafficking and the black market in cultural icons and antiquities robbed from museums and mosques.”

Oddly missing from Bishop’s financial analysis is the role of our alleged allies in the campaign against IS, Saudi Arabia — a regime fairly indistinguishable from IS in many of its human rights practices — Qatar and Kuwait, and the financial support that flows from powerful, wealthy and often well-connected families in those countries to IS, not to mention the generous “aid” that flows in the tens of millions of dollars from Kuwait to Syria, reaching extremist groups including IS. Nor did she mention Turkey’s failure to stop IS selling oil via the Syrian border with Turkey, confirmed by US Secretary of State John Kerry.

Indeed, in Bishop’s telling of the War on Terror, Western countries and their allies like Turkey and Saudi Arabia have a minimal role of any kind. Staggeringly, in relating the history of IS, she doesn’t mention the Iraq War at all except one vague reference to the “US surge”. Bishop ignores how the origins of al-Qaeda in Iraq in the Iraq War and subsequent occupation and instead blames the Arab Spring:

“The Arab Spring for all its potential as an example of grass roots democracy movements rising up against authoritarian regimes, in fact left behind chaos and instability — creating a breeding ground for terrorist cells. One of the most brutal was al-Qaeda in Iraq under the ruthless leadership of Abu Musab al-Zarqawi, who was among the first to use beheadings as a tool of terror.”

So there you have it — IS was created not by the US, the UK and vassal states like Australia in the Iraq War, but by Arab grassroots democracy movements. The closest Bishop comes to acknowledging any responsibility for the West in Islamist terrorism — a role, I repeat, acknowledged by the CIA, MI6 and others — is when she approvingly cites an academic who says a “desire to help Muslims under attack” is one of the reasons why IS is able to recruit people. She doesn’t say who is actually attacking Muslims — because that would be to specifically mention the key figure she has gone to absurd lengths to avoid mentioning — the West and its attacks on Muslim countries.

This is the real “existentialism” of the War on Terror narrative — the non-existence of any Western responsibility in what’s happening. Muslims are “attacked” by unnamed enemies; terrorist cells are created by Arab democracy movements, IS sells oil into a black market mysteriously beyond the control of the West and its allies, “weapons normally the preserve of governments” somehow turn up in IS hands. In Bishop’s looking-glass War on Terror, the West exists purely as innocent victims of Islamist terrorism, minding our own business until we are unwillingly dragged in to fight this unprecedented threat. Bishop doesn’t just lack even the vaguest understanding of historical context, she’s offering a drama in which the lead actor stays offstage the entire time.

Very good work, Bernard. Western governments have been in denial about their very central role in Middle East instability for more than a century. Us humans have a stunning capacity to fail to learn from our mistakes as we are hopelessly prone to denying we ever made them.

So Abu Musab al-Zarqawi, dead since 2006, created a feared terrorist organization out of the chaos of the Arab Spring movement in 2010?

Faced with such an opponent, how can we hope to succeed?

I don’t know which is more frightening.
That Bishop et al do not understand what they are saying, or that they do

Excellent article Bernard, finally someone has stated the facts about the war on communism; bring the world to the brink of extinction by nuclear weapons.
On IS, what does one expect from these historical wannabe’s. Julie wouldn’t mention the Allied war crime of invading Iraq, that would be criticising the great John Howard, running dog of G Bush Jr.
Who is writing her copy? “utilising the latest in technology and weapons that would otherwise be the preserve of governments”what, Toyota Land Cruisers, the off tank and lots of AK47’s. When they fly their first aircraft in attacks then we can worry.
Watching 4 Corners last evening I would be arming the Kurds and promising them a homeland at the end, but we all know why that’s not happening. At any rate, the US needs a war, it’s good for the economy.