A Ferrari Maserati phishing trip? Staff at Fairfax have been warned about phishing emails purportedly coming from their boss Greg Hywood asking for personal details so they can make a wire transfer for him. The email address looks legitimate, but the reply email is [email protected] We doubt anyone at Fairfax would fall prey to something like this, but it’s a cruel trick — surely staff would like a bit of extra cash from their Maserati-driving boss.

See that ludicrous display last night? In another edition of UK pollies being badly briefed, PM David Cameron appears to have forgotten which football team he supports. Having had his focus groups find an impeccably inoffensive team for him to support — Aston Villa — last week he forgot he did and folksily remarked (in a diversity thing) “Where you can support Man Utd, the Windies and Team GB all at the same time. Of course, I’d rather you supported West Ham.”. Challenged later, he said he’d had a “brain-fade”. While he’s trying to show he’s a man of the people, true footy fans (no matter what the code) know you don’t forget your team.

Radio shakeup continues. Two weeks after the new Fairfax/Macquarie Radio merged entity (called the Macquarie Radio Network) sacked all but one of Magic 1278’s hosts, a leaked internal memo reveals some of the station’s new Melbourne  lineup, according to industry title Jock’s Journal. Jane Holmes, the sole survivor of the cleanout, will co-host with John Blackman, while program director Dave Ferguson will host Drive. Meanwhile, 4BC listeners in Brisbane heard Alan Jones and Ray Hadley on their radios this morning, beamed up from Sydney. Hadley told his new Brisbane audience this morning that their concerns were the same as those all around the country.

Brandzac, Liberals and clubs edition. People turned out in record numbers at memorial services over the weekend to commemorate Anzac Day, and thousands also attended Camp Gallipoli sleepouts in cities around the country. The Camp Gallipoli Foundation has already been in the news, with its products pulled off shelves in the lead-up to Anzac Day. One tipster attended their service in Melbourne, but was less than impressed with the tone of the event:

“Was I the only one who was upset that at the Camp Gallipoli Dawn service in Melbourne on Saturday they got people to sing the Christian hymn ‘Abide with me’ and say the Lord’s prayer? I thought all memorial services such as this were to be secular and just mention a generic ‘god’ rather than emphasize the Christian one. Not that I saw anyone there other than Anglo-Celtic-Northern European types, but one would hope that people of a Muslim or Hindu faith might come if there is a future event, especially as so many Indian troops from what is now India, Pakistan and Bangladesh fought and died at Gallipoli. But I don’t think they would be welcome, the two Colonels who spoke at the Dawn service delivered pretty militaristic comments and I won’t be going back next year.”

Another tipster received an “e-briefing” from Paul Fletcher, with added Liberal logo: 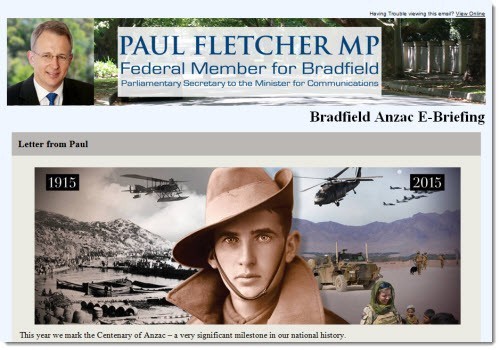 Following Friday’s tip about the Zoo Weekly “commemorative edition”, another tipster sent us this advertisement for an Anzac-branded club night that happened last year in Broome: 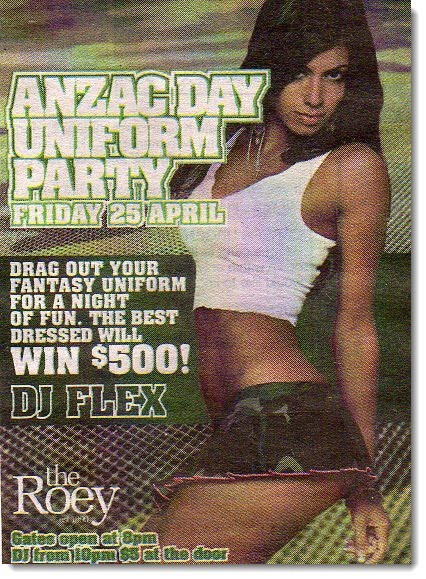 Irresponsible Premier confirms mining subsidies. One of the things that infuriates the mining industry (remember, the “m” in mining is pronounced “wh”) is the suggestion that, rather than grand saviours of the Australian economy, the sector that saved Australia from the GFC and that single-handedly keeps the country viable, mining companies in fact are beneficiaries of subsidies from the Commonwealth and state governments. The issue, which is the basis of a long-running Australia Institute critique of the miners, has cropped up in relation to the Barnett government’s efforts to convince the rest of the country that, despite a huge mining boom in the west that, even now, still brings the iron ore price to many multiples of its long-run price, it’s being gouged by the GST allocation formula that it benefited from in the lead-up to the boom. Ah ha, says Barnett, but we had to spend a lot of money to enable that resources boom, especially the LNG boom, to happen, and that should be taken into account. In Barnett’s letter to the editor in today’s AFR, he wants the Grants Commission to “fully recognise, account for and equalise the costs incurred by the state to provide supporting economic and social infrastructure to allow such projects to proceed”. Sounds like the WA government was subsidising the resources sector. But wait, right below Barnett’s letter is a letter from Reg Howard-Smith of the Chamber of Minerals and Energy of Western Australia. Reg is adamant the sector isn’t subsidised. “It is irresponsible of the Australia Institute to falsely claim the resources sector benefits from government subsidies when impartial evidence continues to state it does not,” says Reg. So, who’s right, the Premier of WA, or Reg? Well, let’s check the figures, helpfully provided by the WA government in many of its whining submissions to the Commonwealth Grants Commission. In 2013, WA devoted an entire Appendix of its submission to explaining, in line-item detail, how it has spent “around $8 billion” subsidising the North West Shelf project via “agreements, financial assistance and infrastructure provision”. Perhaps Reg has better “impartial evidence” he can point us to.

Maybe now’s not the time … This was an awkward advertisement to pop up on the SMH website this morning: 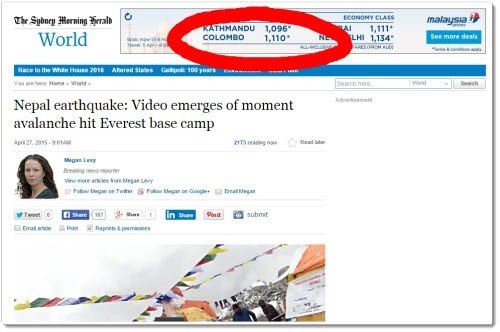 The real backbone of the economy (hint: it’s not mining)

Far asI can see, the mining industry wrecked the rest of the economy, a lot of it permanently, and Abbott is trying to wreck what’s left.