Pollies take on journos in our defamation list, Turnbull's war of words, and print ads prove weak -- again. Plus more media tidbits of the day

Turnbull’s war of words. It’s a funny old world, though less so this morning if you’re Scott McIntyre. The now ex-SBS reporter’s tweets on Anzac Day were denounced as “offensive” and “inappropriate” by Communications Minister Malcolm Turnbull. Well, Twitter ain’t a great medium for debating the morality of war, but McIntyre’s sentiments are hardly new.

Take the thundering denunciation of World War I by a man who eventually became leader of the British Labour Party and was at that time editor of the anti-war Labour Herald: “The workers of all countries have no quarrel. They are … exploited in times of peace and sent out to be massacred in times of war.” The speaker? George Lansbury, grandfather of Coral Lansbury, girlfriend of Bruce Turnbull, and mother of Malcolm.

Yes, our would-have-been first president is the great grandson of the man who turned British Labour into a socialist party, was a president of the Anti-Imperialist League, a founder of the Peace Pledge Union and — and this is my favourite — the man who booked the hall for the meeting at which Lenin founded the Bolshevik faction of the Russian Social Democratic Party.

Offensive and inappropriate? I think old George would have been on Scott McIntyre’s side. Oh and the Labour Herald? After several transmutations it hit the buffers in the 1960s, and was purchased by a rising young Australian media proprietor who turned it into, you guessed it, The Sun. Funny old world. — Guy Rundle

Continuing the Turnbull guide to free speech. Meanwhile, what does it take to get a public rebuke from Malcolm Turnbull if you’re in a position that is funded by the taxpayer? Well, SBS’s now sacked journalist, Scott McIntyre, was publicly attacked on Twitter by the Communications Minister over the weekend for his tweets on Anzac Day. But consider the case of Sally Betts, the mayor of Waverley Council in Sydney who provided a character reference for Sydney rapist Luke Lazarus and has proposed to write a guide to stop young women behaving in ways that get them raped. What did Turnbull have to say about Betts? Nothing at all — despite the fact that Betts has a part-time taxpayer-funded position in his electorate office “looking after the Wentworth community” (“looking after” presumably in the sense of publicly urging that rapists — oops, sorry, “gentle well mannered and respectful young men” — not be jailed). So, questioning Anzac Day gets you branded “despicable” by Turnbull, but if you think rapists shouldn’t go to jail and young women have to be taught to behave better so they don’t get raped, Malcolm’s apparently OK with that. Or is there some nuance we’re missing? — Bernard Keane

Pollies v journos — our defamation list. In January, we published the latest Crikey list of politicians who’ve sued the media for defamation. Thanks to a few recent cases (Andrew Stoner against Alan Jones; Ian Michael McDonald against the ABC) and some help from the lovely people at Marque Lawyers (who volunteered to trawl their casebooks on the issue for “fun”), we’ve added a stack of new names.

Recent additions include a stack of South Australians (Ralph Clarke, Patrick Conlon and ALP candidate Nicole Cornes), and some we shouldn’t have missed the first time, like Paul Gibson (who tried to sue, unsuccessfully, when The Daily Telegraph implied he’d taken taxpayer funding for study tours then failed to attend meetings while overseas) and Concetta Fierravanti-Wells, who appears to have settled with News after two Sunday Tele articles made a number of imputations regarding travel entitlements. You can read the full list here.

Marque Lawyers also sent along a number of interesting cases that we didn’t put on our list because they don’t strictly involve politicians suing journalists. They include the time, in 1987, the entire Queensland cabinet sued then-opposition leader Tom Burns over words attributed to him in a press release (he used statements like “this government’s corruption” and leading questions like “which ministers have their hands in the till?”)

He lost the case — a court held he had slurred all cabinet members — which really shows that if you want to defame your political opponents, best to do it in question time.

Fans of Crikey’s lists may recall we promised another one a few weeks back. Our media couples list is coming — it’s just taking a while. — Myriam Robin

Print ads prove weak — again. Another weak result from McClatchy Co, a medium-sized US media company, with print advertising proving to be the major weak point, just as it was with the larger Gannett earlier last week.

Sky calls cut on TV staff. On the eve of its second price rise in six months, and hard on the heels of record nine-month profits and the best growth in UK subscribers for 11 years, the Murdoch’s Sky group in the UK is about to axe staff numbers.

Media reports at the weekend said the group’s management had called a meeting in its 600-strong production services group for Tuesday, London time, at which a new work model will be revealed. Called “Agility and Flexibility”, the new model seems to be code for doing more with less — a favourite buzz phrase of managements who are looking to cull staff numbers to save money.

Production services staff work on Sky Sport, Sky News and other productions for the company’s various channels. (They include camera people, producers, directors, audio staff control room staff and graphic artists.) The media reports say Sky News management is already chopping staff as Sky News digital and TV operations are merged. And in a telling sign, program executive producers have already been told to reapply for their jobs, which are being turned into “heads of content” roles working across both TV and online.

Sounds very Murdochian (and ABC in Australia for that matter), doesn’t it?. Sky has to cover the 83% jump in the value of its bid to retain its share of the TV rights to the English Premier League soccer — which will cost 4.2 billion pounds over three years from 2016-17. Hence the second price rise, and then the mooted staff cuts. — Glenn Dyer

Ten stares down refinancing gun barrel. We are now at the Last Chance Saloon for the struggling Ten Network, which is due to reveal its first half financial results in Sydney this Thursday. Before that happens, the network and Foxtel are attempting to get a desperate, discounted fund-raising move signed, sealed and delivered.

The Ten network must be really down in the gutter judging by the certainty in the briefing of the Australian Financial Review this morning about the looming deal with Foxtel.

The success of that second issue to shareholders will depend upon whether Lachlan Murdoch, James Packer, Gina Rinehart and Bruce Gordon want to contribute by taking up their entitlements. (Gordon could be the only one interested in maintaining his stake.) If they don’t participate, the issue will fall short and even fail. There is no longer a “sale process” in place — it is a refinancing. Ten has the ever increasing cost of the $200 million revolving credit line and capitalised interest from the Commonwealth Book on its books, which no one expects Ten can repay in two years time. This means Packer, Murdoch and Gordon will be on the hook because they have guaranteed it.

No one else will lend Ten the money — even though its ratings have lifted from the disaster they were in the first half of 2014, they still are not enough to give anyone confidence the network can generate enough cash to repay the CBA loan and finance new programming for 2016 and 2017. That’s why all that talk about bidding for the AFL and the NRL TV contracts is just hot air at the moment.

Foxtel’s so-called partner, the US Discovery, has vanished, not interested with the increasingly desperate attempts to save the network and the reputation of Lachlan Murdoch, the former chairman who bears much (but not all) responsibility for Ten’s appalling ratings and financial performance in the past five years.

Foxtel, which is half-owned by News Corp, is the only possible source of new funds left standing in the inept sale process, which started at a mooted 26 cents a share late last year, and has fallen steadily to the current 18 cents a share. The market still has Ten shares around 20 cents, which tells us there’s still some scepticism about the finality of the deal. There is no longer a takeover offer on the table.

Ten has already approached shareholders twice in the past five years for more than $400 million in new capital, which has vanished. Now many are going to put their hands in their pockets a third time. If Packer, Murdoch and Rinehart don’t play, it could be a message from the biggest shareholders that Ten isn’t worth saving. — Glenn Dyer

Front page of the day. Horror scenes from the earthquake in Nepal … 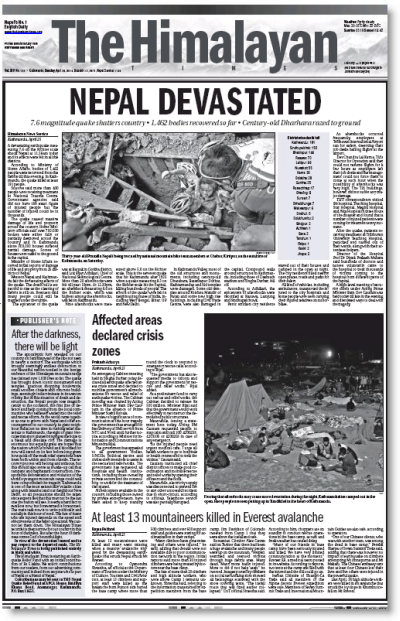