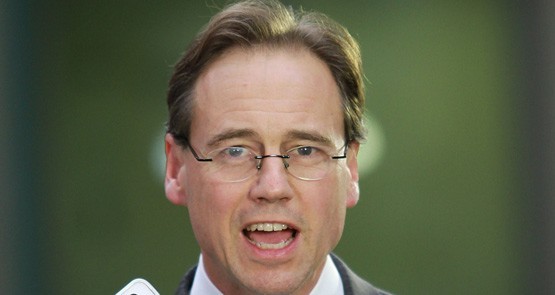 When a particularly large star explodes, it throws off a great deal of matter into outer space. In some cases, it leaves behind a formation so heavy that protons and electrons cannot exist, leaving only neutrons. This is the only physical phenomenon that I think can provide an adequate benchmark against which to measure the denseness of Greg Sheridan.

And as strong though his attachment to Abbott is — the homosocial undertones would not be out of place in a Victorian public school novel — he sometimes ventures well beyond this subject to consider the vast merits of people with whom Tony Abbott works. It is in this mood that we find him this morning, debating whether the government’s Direct Action policy is a stroke of genius or merely just a matter of outstanding and unsurpassed policy acuity.

“Greg Hunt,” Sheridan tells us, “is going to cut Australia’s carbon emissions four times more than Labor did with its carbon tax at 1 per cent of the price per tonne of emissions cut under the carbon tax.”

Hold on, sunshine. Greg Hunt has not actually cut anything yet. He’s had some people express an interest in cutting their emissions in exchange, of course, for a small taxpayer-funded consideration. But Sheridan’s most egregious mistake is to accept the numbers spooned to him by Environment Minister Hunt, who claims, not for the first time, that the cost of abatement under the previous government’s carbon tax was around $1300 per tonne.

The Gregs, pere et fils, obtain this number by dividing the total revenue collected by the carbon tax by the reduction in emissions in each year of the tax’s operation compared to the year before it came into effect.

This procedure — calling it a “calculation” would be to award Sheridan a scientific lustre that is scarcely supported by the bumbling innumeracy that he seems to bring to everything he writes — gets at least two things wrong. The first is simple: the amount of abatement that takes place is not simply last year’s emissions minus this year’s emissions. It is the amount of emissions that would have taken place this year without a carbon tax (or whatever) minus the amount that actually were emitted.

The second mistake is to consider the total revenue raised by the carbon tax as the abatement “cost”. It isn’t. In fact, the carbon tax was paid on emissions that were not reduced; the abatement cost was therefore the amount of money spent on doing things — planting trees, installing more efficient combustion engines or whatever — in order to avoid paying the tax.

The tax put an upper limit on the amount of money anyone would be willing to pay to reduce their emissions. If the price were higher than the statutory rate of the tax, it would make economic sense to simply pay the tax. We can therefore be more or less certain that, unless companies were negligent, it cost no more than $24.15 a tonne to abate emissions under the carbon tax, with the average abatement cost per tonne lower than that.

The problems with Greg Hunt’s scheme are already well known: the fixed budget means it’s unlikely that we will achieve even the unconditional cut of 5% on 2000 levels (as Ross Garnaut has pointed out, this number is irrelevant anyway: we will need to make much larger cuts based on our commitment to the UN, given that other countries have acted as well). As a market mechanism it also leaves a lot to be desired. We still don’t know exactly how the punitive “safeguard” mechanism is supposed to work, and there’s an inbuilt incentive for companies not to make emissions abatement they might have made anyway, unless or until they win the reverse auction.

This isn’t the only clod-hopping error in Sheridan’s article. For example he argues, or at any rate he types, that emissions trading schemes are of “declining relevance” in the world, apparently oblivious to the fact that California introduced one several years ago and China is getting ready to start a nationwide scheme next year.

This is because schemes that place an explicit price on carbon emissions are efficient: they raise revenue and reduce socially undesirable behaviour. So maybe in the lead-up to the budget — with the underlying fiscal balance at risk from plummeting iron ore prices — we could have a new scheme: a market-based mechanism that places a price on mistakes in Greg Sheridan columns with a cap that declines with each article.

Limited News – “The Life of Brian is a film that mocks Christ as “just a naughty boy”.

It seems that most of the projects signed up for in this auction were being delivered under the carbon tax legislation.

And, while the $ is less for the Direct Action policy, it is an expense to the government, while the carbon tax was income.

In short Wayne, it demonstrates that as a party championing market-based approaches, the federal LNP is woefully inadequate in realising its stated philosophy.

It is hard to figure out what is going on with carbon right now. Hunt serves up glossy well-spun spin while Labor grumbles murkily.

If Greg Hunt is wrong, Mark Butler should put us right – just make it crisp and clear please!

I found myself getting angry while watching Hunt on 7.30 last night. He was determined to push his load of rubbish but ended up looking a fool. He was actually claiming success when no results have been achieved with the contracts having just been awarded.So no need to see if the carbon is reduced or contracts completed. Apparently achievement comes before work is done rather than after according to Hunt.