Sydney Uni reacts to "media issues" ... Turnbull's dog blog back with a yap ...and the worst Anzac commemoration we've seen ...

Formal complaints? The fallout from Monday’s episode of Four Corners, which revealed the decline in academic standards at Australian universities, especially in relation to international students, has been felt at universities across the country. Especially at the University of Sydney, where whistleblower Zena O’Connor told the program that she had been discouraged from reporting plagiarism from international students and told to make efforts to help them pass. In an email to staff in the school of architecture and design with the subject line “media issues”, dean John Redmond said that O’Connor hadn’t formally reported any plagiarism from students:

“I am advised, that late in 2013 and more recently in March this year, Dr O’Connor verbally raised concerns with the Co-ordinator of the unit she teaches, about students submitting purchased assignments, and plagiarism. The Co-ordinator advises that in discussion with Dr O’Connor it was agreed that the first time plagiarism was suspected, a warning would be issued and the students given the opportunity to resubmit. If after this initial warning, students submitted a second item for assessment that gave rise to a suspicion of plagiarism, then the case should be reported to the Associate Dean (Education). The Co-ordinator verbally advised Dr O’Connor that she must report suspected cases of plagiarism, and this was followed up with written advice in March of this year. However, no formal reports have been filed with the Faculty. Nevertheless, it would seem Dr O’Connor continues to have suspicions about plagiarism …

We took that to O’Connor, who said she hadn’t made formal reports, pointing out the process was “onerous and time-consuming” and that although she had regularly raised concerns verbally, she had never been encouraged to make a formal report, and none of her supervisors had made reports, either.

Takeover of free speech. Our tipsters are always quite forthright, and after reading Stephen Mayne and James Wheeldon’s report on the suppression of free speech by the Takeovers Panel, one of our trusty readers emailed the panel to ask why it suppressed speech in such a way. He got this response from Takeovers Panel director Allan Bulman, which was shared with us:

“Thank you for your feedback. For your information, the Panel was asked about its media canvassing policy by the Parliamentary Joint Committee on Corporations and Financial Services on 21 March 2012. I said at that hearing, among other things, that: There was a survey that the panel itself conducted, which is partly on its website, by Chant Link. More recently, in 2010, the Law Council did a survey not only of its members but also, through assistance from the panel, of people who had recently dealt with the panel. In that survey, 79.7 per cent of respondents believed that the panel’s media-canvassing policy should continue. I have no doubt that it will be debated again, but it is an issue that we think the majority of the market is comfortable with.”

Return of the dog blog! The return of Malcolm Turnbull’s long dormant “dog blog” is upon us. The blog was a segment of the Communications Minister’s website that featured posts “written” by his own pups as well as occasional guest posts by other internet-savvy canines keen to get their barks heard on the internet. Yesterday’s guest post by Dusty the kelpie was the first published on the site in a year and a half. After Turnbull visited Dusty’s hometown of Longreach in central Queensland, the kelpie had much to say about the NBN’s satellite services and the benefits it will provide his humans living in remote areas. Here’s some of Dusty’s more insightful observations:

“When Communications Minister Malcolm Turnbull visited Longreach with our old friend Maranoa MP Bruce Scott recently, Kelp and I told him he needs to throw remote communities a bone. They kept talking about broadbone, bonewidth, which was a bit confusing until they got onto mega bites and thousands of them which sounded very promising.”

We have to say we hope that the dog blog is back for good.

Carlton in good books? Over the last few days the Facebook page for the Prime Minister’s Literary Awards has been promoting previously shortlisted books that cover topics related to Australia’s involvement in different wars. We were bemused to see that Mike Carlton’s book First Victory got a plug — especially after he railed against last year’s winner in Crikey. 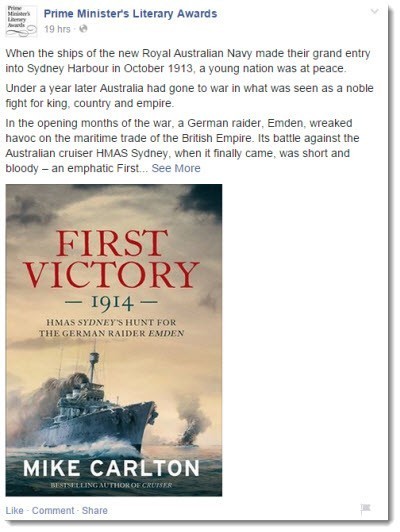 Not a time for selfies. Our Anzac tips have been getting more and more bizarre, but this one may just take the cake. One tipster has alerted us to an “ANZAC Day Selfies” Tumblr website, which has posted well over 50 Anzac-related selfies on April 25 last year. One early riser posted a picture of himself looking not so happy to be attending the dawn service with the caption “No rest for the wicked #FML.” Ah, the struggles for the modern-day youth who have to get out of bed early and stand in the cold to remember men who lost their lives in war. Another woman commemorated the occasion with a picture of her bare stomach after a run on the beach with the caption “Today is a day of reflection… I reflected how great eggs on toast is at brekkie.” Last year’s selfie takers were particularly keen on the hashtag #lessweforget. We cannot confirm if the page will return this Saturday, but here’s hoping if it does, 2015’s selfie takers focus on the correct use of traditional remembrance phrases in their hashtags.

And this is possibly the worst bit of Anzac Centenary merchandise or supposed “commemoration” we’ve come across. The latest edition of Zoo Weekly features a bikini-clad, photoshopped model holding a poppy and promises “100 Things every Aussie should know about Gallipoli”. Interestingly, even the comments from Zoo’s own fans have panned the cover, calling it disgusting. 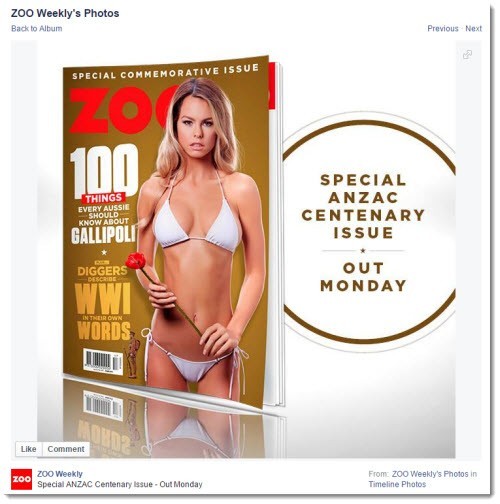 We asked the Department of Veteran Affairs if Zoo had permission to use the word ANZAC and were told in a statement:

“Zoo Magazine did not seek permission from The Minister for Veteran’s Affairs to use the word ANZAC in association with their commemorative issue.   When DVA became aware of this issue, an email was sent and a phone message was  left with the magazine informing them that this advertising must be removed.  As of yet we have not received a response.

The Department will continue to pursue this matter until the issue is resolved.” 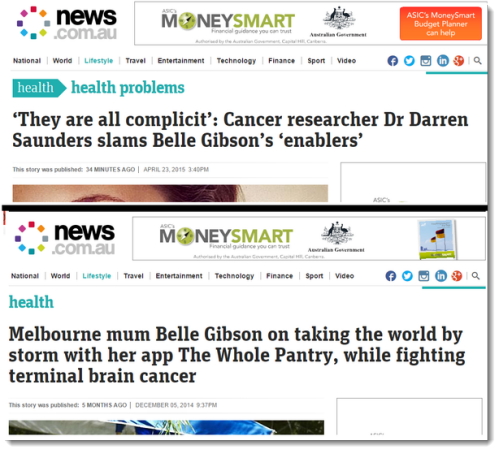