‘The Nats are a waste of space’: Windsor opens up about life in politics

Tony Windsor told a rapt audience at Gleebooks about the problem with the current government, what he thinks of The Australian and who Tony Abbott's parents might be. 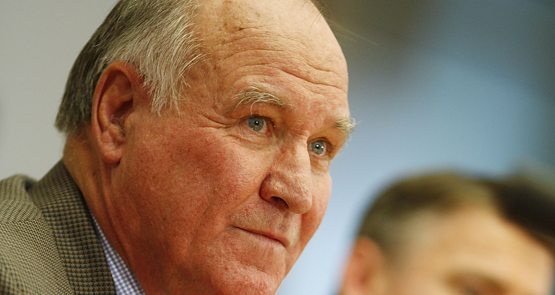 When the independent member for New England, Tony Windsor, announced that he would not be recontesting his seat after the 2013 federal election, a good man left politics. Windsor, 64, was one of the three crossbenchers who determined the outcome of the 2010 election, delivering the prize to Julia Gillard. He is a rare bird in the political landscape — a man of integrity, he lived to serve his constituents and the people of rural and regional Australia, who make up 30% of the population.

He’s written a very good book about his life, Windsor’s Way, and last night he addressed a packed house at Sydney’s Gleebooks to discuss it.

The best bits of the book explain the nuts and bolts of politics, but not in a boring way. He takes you inside the system — the committees, the debates, the horse-trading over legislation. In politics for 22 years, he was the independent who served in two hung parliaments, delivering government to the Liberals in NSW and then to the Labor Party federally. He is passionate about the role of the independent.

“I felt strongly that 30% of Australians — that is regional Australia — deserved 30% of the resources. Voters understood that. It hurt the Nationals, who purported to represent the views of country people … but weren’t taking their constituents’ views to Canberra. Instead they were bringing the edicts of Canberra back to their country constituents with the lame excuse, ‘we tried in the party room but failed to get the necessary support from our Coalition partners, the Liberals.’ ”

In the book, Windsor relates a conversation with his successor, Barnaby Joyce, in which the National Party leader tells him that about $50 million in promised funding by the Coalition for the electorate was withdrawn when Windsor announced he wouldn’t re-contest. In other words, once the Coalition had realised it would regain the seat, it pulled the funding. This is the way the major parties have always treated the regional areas, Windsor says, and it was a “classic example of why the Nats are a waste of space”.

Windsor has a black sense of humour and gives it free rein, describing  fellow crossbencher Rob Oakeshott, a former National Party member, as “one of the good-looking young Nats — an Andrew Stoner with brains”.

Later he describes some incident as being “mind over matter” because  “I don’t mind, and he doesn’t matter”.  And when he was asked at a morning doorstop in Parliament if he had read a story in that morning’s Australian newspaper, he replied, “I haven’t seen it, I use Sorbent.”  His political bete noire, Sophie Mirabella, who lost her seat to an independent, is the “dearly departed Sophie”.

Windsor points out that the derided Gillard government, vilified by its opponents as a “shambles”, actually passed more than 500 pieces of legislation. While John Howard only passed one substantive reform — the GST — Gillard’s hung Parliament achieved six major reforms, Windsor says. They were the National Broadband Network, the National Disability Insurance Scheme, the Murray-Darling Basin Plan, climate change and renewable energy reforms, Gonski and the Royal Commission into Institutional Responses to Child Abuse. Seven if you count cigarette plain-packaging reforms.

Contrast this with today’s Parliament. The Coalition has been unable to pass a single substantive bill, while the 2014 budget is still hanging around like a winter cough. The PM’s approval ratings will soon put him on a par with Rolf Harris.

However, Windsor says that while Julia Gillard was a good legislator, she was a poor marketer of her own policies. Part of the reason was that she got up every morning to face three opposition leaders — Tony Abbott, Kevin Rudd and the Murdoch press.

Windsor is no fan of Abbott’s. A few chapters in the book deal with  the 17-day hiatus after the 2010 election, when he, Oakeshott and Bob Katter worked out which way they were going to vote:

“[Abbott’s] preferred practice in politics, whether at university or federally, had been to grind opponents into the dirt. He delighted in playing politics like a football match, forgetting he needed to spend some time in the locker room. This is not a criticism, he is wired that way. Gillard operates another way. Negotiating is what Gillard had done all her life.”

Last night at the Gleebooks event, he repeated an anecdote that he had used in the book to illustrate his opinion of Abbott. When Howard was prime minister and Abbott was leader of government business, Windsor had been scheduled to speak on a bill relating to regional issues. But the  two major parties had used the debate to play politics, and time was running out. Abbott came over and asked Windsor to truncate his speech, but he refused. Finally, Abbott uttered the immortal words, “Well, we can do this the easy way or the hard way,” to which Windsor replied, “Let’s do it the fucking hard way, then.”

Abbott backed off and Windsor got to make his speech. And Abbott never threatened him again.

“Every day in question time, Rudd would stick the knife in, and that weakened Turnbull — and along came Tony Abbott on the basis of that divisive issue. Bronwyn Bishop is his mother, and Kevin Rudd is his adopted father.”

Seeing Tony Windsor again last night was a reminder of what good, honest politicians look like. Although he has retired from the federal Parliament, for his huge number of fans, the book does offer a glimmer of hope. “Now that I am refreshed and still interested and concerned about where our nation is heading I would not rule out a return to politics … Watch this space.”

The power of Wilkie

Come back Tony, your country needs you.

Oh wouldn’t it be glorious, to see Tony Windsor take on Barnaby Joyce in New England in 2016.
Hope springs eternal.

The book is good insight into politics and an easy read.
I enjoyed reading it last week!

PS: I also read Rob Oakshot’s book which is a bit more detailed (especially concerning the Murdoch press) but also a good read.

Please come back, Tony Windsor. It’s not just your electorate that needs you – it’s the whole country.

I don’t see how Rudd “created” Toady – the wattle and daub was there long before :- Ramjan, Bernie Banton and who knows who else?
[And what’s a toad’s arse worth these days?]