Plus ca change … The Monthly turns 10

Australia's magazine of ideas, The Monthly, is marking its 10th birthday. 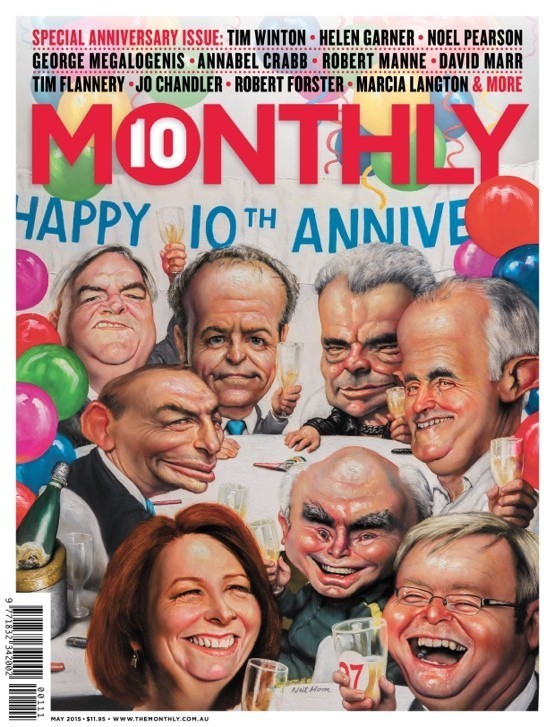 When The Monthly launched in May 2005, few believed it would survive. But if there’s been one constant in founder and owner Morry Schwartz’s publishing career, it’s been a tendency to go against the tide.

The Monthly turns 10 today. In that time, it’s come to publish many of Australia’s best writers and thinkers, while paying them $1-a-word rates unimaginable in most parts of the media. Its management, while not revealing exact figures, say it meets its costs (at its launch, Schwartz, who made his money in property development, said it needed to sell 25,000 editions a month to be sustainable — it currently sells around 30,000). It exists alongside Schwartz’ other two titles — Quarterly Essay, which precedes The Monthly, and the recently launched Saturday Paper. The Monthly has become Australia’s best-known and most influential magazine of ideas.

In a way, editor Nick Feik says, The Monthly has no major competitors. “The Bulletin and Time have fallen away,” he said. But The Monthly isn’t quite a news magazine like those titles anyway. Feik says articles are often commissioned 10 weeks in advance. And the paper has very few permanent staff, which is why it can meet its costs while paying freelancers high rates. The paper’s permanent staff consists of Feik, two editors and some designers. A freelancer proof-reader is used every issue.

“I read something Morry [Schwartz] had written about his plans for the magazine in 2003,” Feik said. “It said a magazine will live or die on the quality of its writing. That was always a fundamental principle of the quality of the magazine. To get the best writers, we have to pay the best rates we can. That was our ambition — to treat writers the best we could. And we have an editing process that’s extremely rigourous and rare. Writers have come to recognise that we’ll treat them carefully.”

The first time the broader public took note of The Monthly was probably when the magazine published Kevin Rudd’s essays, in which the then up-and-coming opposition leader (later prime minister) set out his thoughts on religion in politics, and his reaction to the global financial crisis. Rudd’s essays, the first of which was published in October 2006 when the magazine was a little more than a year old, catapulted The Monthly to the nation’s news pages.

Another pivotal moment was the publication of author Richard Flanagan’s  May 2007 article on now-defunct Tasmanian wood chip company Gunns. As Feik describes it, the essay created “an impression of their activities they could never shake off”. Millionaire adman and anti-Gunns campaigner Geoffrey Cousins had 50,000 copies of the article printed off and letter-boxed in then Environment Minister Malcolm Turnbull’s electorate.

Little has changed in The Monthly’s style since those early days. Every issue still has short snippets of opinion up the front, feature essays in the middle, and arts and culture content up the back. The visual style has remained remarkably consistent. “It was a design principle at the start to produce something that would have a timeless, classic feel, a la publications like the New Yorker or the New York Review of Books,” Feik said. “They’ve remained very similar over the course of their lifetime. And that’s something we’ve also aspired to do.”

If the magazine and its style has remained consistent, the editors in charge of it have not. Throughout the 10 years, the character and vision of Morry Schwartz has been pivotal to the publication’s direction and style. When the paper launched, he was its editor-in-chief. The Monthly has had five editors in 10 years.

The first, Chris Ryan, left after just a year, and the second, Sally Warhaft, left after three and a half years in highly contentious circumstances. Some reports suggested she disagreed with Robert Manne over an opinionated introduction he wrote, and after insisting it go, Schwartz sided with Manne and Warhaft left. Gideon Haigh, Warhaft’s ex and formerly one of The Monthly’s regular writers, announced he’d never write another word for Schwartz over the incident. But such accounts were described by Manne as “gross distortions” by “sources closes to Sally” in a piece he wrote for Crikey about Warhaft’s departure — he said it followed a broader breakdown of relationships with contributors and the board. To replace Warhaft, Schwartz brought in 23-year-old Ben Naparstek, who edited the paper for two years until he was poached by Fairfax to run Good Weekend. He was replaced, ironically enough, by Good Weekend feature writer John van Tiggelen. That swap also brought its share of controversy, with van Tiggelen accusing Naparstek of paying female contributors less and pinching his ideas at Good Weekend — Fairfax fired back.

In April 2014, van Tiggelen stepped down as Monthly editor for a staff-writing role before leaving altogether. He was replaced by current editor Feik, who was the magazine’s web editor before that. It was when Feik was in his previous role that The Monthly began the Shortlist Daily and Politics Oz — daily newsletters that have changed in format over time but are geared to the daily news cycle. They serve to drive readers to The Monthly’s magazine content, and to encourage subscriptions — The Monthly operates a metered paywall.

For the 10th anniversary issue, The Monthly has tried to commission an all-star edition of its greatest writers. The result is a mammoth, perfect-bound issue, at the heart of which lie essays by Tim Winton and Noel Pearson. It goes on sale Monday.

In Tasmania, even crooks like Gay can run a business