Comcast calls Time on takeover while Gannet confirms group split as publishing weakens. Plus more media tidbits for the day.

Time Warner deal off? In the rarefied of the US media sector, Comcast’s $US45 billion ($A58 billion) takeover of Time Warner Cable is off, according to Bloomberg, The Financial Times and the Wall Street Journal after US regulators suggested it should go through an approval process including a court hearing.

The reports  are now saying  that Comcast has pulled the deal and will officially announce that tonight, our time. Opposition has been growing to the deal — which would have confirmed Comcast’s domination of the US cable sector — from smaller rivals, consumer groups and some state governments and media industry groups, concerned at its sheer size.

John Malone of Liberty Group has said publicly that if the Comcast bid didn’t happen, he would have another go at buying Time Warner Cable. Other possible combinations trotted out by the media include Comcast (which owns NBC Universal) bidding for Netflix, Lionsgate or Time Warner, or ITV in the UK. — Glenn Dyer

More losses in print. US dead tree publisher Gannett Co reported a weak result from its publishing side in their March quarter figures, with a very solid set of figures from its broadcasting, as management confirmed the split in the group was about to happen.

Gannett has been trying to boost the performance of its newspapers by inserting content from its flagship USA Today into some of its local newspapers, a move that has now been expanded to other newspaper groups. The Washington Post and the New York Times have followed Gannet and are also offering other papers a similar service.

There’s revenue increases involved as the companies share ad revenues, but Gannett also claims these inserts as “circulation” under the increasingly rubbery definition of newspaper sales allowed by US audit groups.

But is it having an impact on the bottom line at Gannet? In the March quarter, total publishing revenue fell by 8.8% to $US768.2 million ($A988.7 million), reflecting softness in print advertising, the sale of Gannett Healthcare Group and halting publication of USA Weekend at the end of last year.

Advertising revenue fell 11% to $US444.4 million, while circulation revenue dropped 3.1% to $US273.2 million. The company also blamed lower ad revenues from its Newsquest chain of papers in Britain.

Like the Murdoch clan, Gannett management is now only really interest in broadcasting, and online (non-news sites). Gannet expanded this part of its business in late 2013 with the $US1.5 billion acquisition of broadcaster Belo Corp.

The company now has 46 local TV stations across the US. Last October Gannett completed the acquisition of the 73% interest it didn’t already own in Classified Ventures LLC, which controlled Cars.com, one of America’s biggest car sales websites.

March quarter broadcast revenue a modest 3.8% to $US396.8 million, mostly driven by 26% growth in retransmission revenue that offset the impacts of year-earlier Olympic coverage (at its NBC affiliates) and political advertising spending.

Front page of the day. The Courier-Mail’s front page today is a blast from the past … 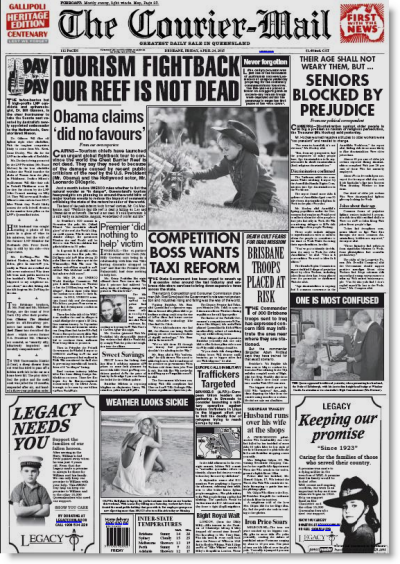