Keane: the old and the new of Anzac amnesia

A century on from Gallipoli, Australia remains mired in pointless imperial ventures in the Middle East and "Lest We Forget" was never more ironic. In talking about Anzac Day recently with people of my generation, we invariably get to a moment when we agree that it was all very different when we were young, growing up in the 1970s and 1980s. Back then, Anzac Day was almost an afterthought, the annual arrival of which tended to prompt speculation about when it would die out.

My own childhood Anzac Day memories tend to be rather indirect. I’ve never been to a dawn service, despite losing an uncle over the Philippines in 1944, “shot down by the Japs” in “the war” — by which everyone meant WWII, a piece of shorthand I’ve often thought to ask the young folk about to see if “the war” means the same thing to them. But I will never go to a dawn service; it’s the date, you see. Commemorating an unprovoked invasion of a Middle Eastern country at the behest of our imperial power, even if only to recall the sacrifice of those we sent, feels wrong.

Rather, my childhood memories are more about what others did with Anzac Day: rumours “a whole bunch of wogs” were going to disrupt it — “wogs” in the ’70s occupying the same place in the Aussie pantheon of Other-based fear as the Vietnamese would occupy in the ’80s and ’90s and then the Muslims thereafter. Annual debates about the ethics of two-up and whether it should be allowed on The One Day Of The Year (in an era of SP bookies who lurked in pub carparks, their number plates obscured). Other debates, about whether to play footy matches on the sacred day — “Give An Old Digger A Go!” implored the front page of The Daily Telegraph during one such frenzied debate. Or the banal television coverage, with Major Peter Young brought out of cryogenic suspension every April 25 to comment on the various units marching down Elizabeth St — “There’s the 2/4th, saw action against the Vichy French in Syria in 1941 before moving to New Guinea.”

It’s unclear when Anzac Day started to regain its strength, commencing a long recovery into the unstoppable juggernaut it is now. The claim “there are more and more young people getting involved this year” was automatically stated every year by the RSL, but at some point it actually began to be true. And Peter Weir’s Gallipoli had confirmed the foundational Anzac myth of British arrogance destroying the flower of Australian youth, although not New Zealand youth, since the Kiwis were strangely absent from the film.

But the resurgence of Anzac Day seemed to coincide with the growth in Australian nationalism. It used to be said of Australians in the ’70s that we lacked Americans’ spirit of demonstrative patriotism, a claim that would be risible now. That was sorted out once the ‘80s got going: the America’s Cup, Bob Hawke’s Australia jacket, world champion thug Jeff “I love youse all” Fenech, Down Under as the de facto national anthem and the boxing kangaroo as the national symbol — exotic fauna always ready for a fight, so perfect for Australia. “We’ve been in every war this century,” Paul Hogan — another icon of the era, but one with some self-awareness — said in a pisstake of army ads, “and we’ll be in the next one, even if we have to start it ourselves.”

The ’80s culminated, stylistically if not calendrically, with the bicentennial Invasion Day in 1988, an appropriately gaudy Sydney celebration that only lacked the incessant cry — a decade away — of “Aussie Aussie Aussie oi oi oi” to be complete.

And around this time, at least for my teenage self, the narrative of Anzac Day also began to be contested, as those who had been there — and often inconveniently failed to uphold the preferred narratives — passed away. Female protesters clad in black began to disrupt the Sydney march “in memory of all women of all countries raped in all wars”. The vituperation and hate directed at these protesters was extraordinary, including the immortal line “they’d be lucky to be raped”. I may not have been the most gender progressive teenager in Maroubra, but I recognised guts when I saw it. And I saw it in those women being vilified on the evening news.

““Lest We Forget” was never more ironic than for a nation hell bent on endlessly repeating the errors of Gallipoli in the name of latter-day imperial adventurism.”

And the role of indigenous soldiers was only slowly acknowledged, beyond the faintly minstrel-like honouring of the Papua New Guineans as “Fuzzy Wuzzy Angels”, a safe kind of Noble Savage stereotype. That Aboriginal and Torres Straight Islander troops had served Australia was absent from the Anzac legend until the ’80s. That Australia’s first and most crucial war had been between Aboriginal defenders and white invaders and occupiers was, of course, an entirely unwelcome narrative. It remains today a story of slaughter, dispossession and resistance that is barely known.

Other forms of contest emerged. Paul Keating wanted to shift the focus of Australia’s commemoration away from the British tragedy of the Dardenelles to Australia’s own self-defence in World War II, especially in New Guinea against the Japanese, with the 1995 “Australia Remembers” events a focal point. It is a small but potent symbol of an era, that Keating could entertain this notion while pursuing a defence policy based on “security in the region, not security from the region”, building stronger relationships across south-east and north-east Asia, and delivering one of Australia’s great speeches at the funeral of the Unknown Soldier on Remembrance Day 1993. It was an era when politicians could argue multiple complex messages at one time, unlike their descendants, who struggle with even one simple message.

But it was the conservatives who really seized on Anzac Day, at least so it seemed, with John Howard wrapping himself in the flag (which he required schools to ritualistically honour) as enthusiastically as he dispatched Australian soldiers back to the Middle East for further pointless imperial wars.

Or did they? My working theory has always been that, faced with the social consequences of neoliberalism — an economic ideology that delivers material wealth at the expense of community sentiment and social capital — conservatives turned to crude nationalism as a new social cement, borrowing the flag when you know the price of everything and the value of nothing.

Conservatives were certainly better placed to exploit nationalism than progressives, given the left’s longstanding aversion to nationalism as crass bumper-bar jingoism/working class opiate — except, of course, when nationalism as per Timor Leste or the murderous Basques was perceived as inconvenient to Western interests, at which point it was enthusiastically endorsed.

But perhaps the politicians merely followed the electorate, not the other way around — particularly Generation Y, strangely, which had none of my generation’s cynicism or lack of interest. Maybe it was because they grew up without the ever-present, mushroom-shaped shadow of nuclear annihilation that marked the Cold War. “Have a good Anzac Day,” a young work colleague told me a decade ago with perfect seriousness — a phrase that may as well have been in Swahili for all its comprehensibility to me.

And the idea of the pilgrimage to Anzac Cove took hold among Australians, who would have not shown the same generous spirit to Japanese people if they had turned Darwin into a site of special remembrance as the Turks who tolerate the appropriation of a small part of their country by their one-time invaders.

By this time, the central purpose of Anzac — to recall the sacrifice of Australians in all conflicts and to reflect on the nature and purpose of their sacrifice — had been abandoned entirely by conservatives. They took us to another futile war in the Middle East at the behest of our imperial masters, with the unfashionable Simon Crean left to take a rare Labor stand on principle and oppose it.

Howard’s Iraq venture — another in a long line of imperial conflicts that make up most of Australia’s military history, from the white invasion wars and the Boer War to our third trip to Iraq at the moment — was almost casualty-free. For that we should be genuinely grateful to Howard, who cleverly dressed up a token and low-risk participation in the debacle as a significant contribution. Barack Obama spotted and nailed him on this when Howard, his political judgment in decline, foolishly decided to intervene in US presidential politics in 2007.

But if almost bloodless, the Iraq debacle caused a significant increase in the terror threat to Australians, led to the draconian curtailment of our basic rights and failed so badly we’re now back in Iraq more than a decade later, doing exactly the same pointless “training” of Iraqis that Howard boasted of completing in 2007. On the centenary of that first pointless Middle East invasion by Australia, once again we’re engaged in a pointless military conflict there — as if we’ve not merely ignored the central lesson of the Anzac legend but we’re determined to mock it. “Lest We Forget” was never more ironic than for a nation hell bent on endlessly repeating the errors of Gallipoli in the name of latter-day imperial adventurism.

So, let the cry ring out across the sands of the Middle East, “Aussie Aussie Aussie, oi oi oi”. Let it ring out for decades, even for another century, until the 200th anniversary of Anzac, when those who so bravely serve us in uniform will still be mired by our politicians in similar worthless wars. 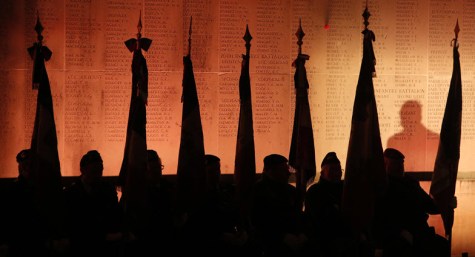 Anzac Day’s disjuncture from the bloody failure it represents

Yes, superb writing on a Australian “icon.” Of an Australian nation fighting for our then colonial masters. Did we learn from this experience? You bet, boldly we switched horses, and in so doing, we now send our youth to perish in America’s wars. Australia is a land of grovelers.

There is one industry that hasn’t got the balls to front up to this shocking commercialisation-not to mention the ABC and SBS-and that is the funeral parlour industry. Better luck next time guys.

“It’s unclear when Anzac Day started to regain its strength”…. Oh probably about 20-odd years ago during and after the creation of the internet. And rightly so. Just as you and your ilk (Rundle) use it to spew your Leftist diatribe into the living rooms of many, the memories of our ANZAC’s will live on.

Australians should remember the sacrifices everyone made during the Great War et al. Men, women, sons, daughters – and so on, all suffered during each campaign. And there will be many to step in, and step up in consecutive wars because of their love of freedom, and their fellow human beings.

You can gob off and twist it any way you like, you will never stop it. In fact, doing so is really thanking us/them for their valiant efforts.