If you thought subsidies for public transport were greater than those for cars, think again. 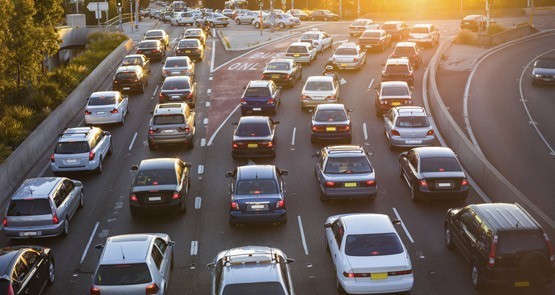 Two of the key issues in urban policy are the external (social) costs imposed by cars and the level of public subsidy required to keep public transport running.

Knowledge about these two closely related issues — the former is the key justification for the latter — is so fundamental to urban policy that there should be dozens and dozens of research projects in Australia on this subject. Yet it seems there aren’t.

I last looked at this topic three years ago. I noted then how astonishingly difficult it was to find reliable, objective and independent studies.

Unfortunately, the landscape doesn’t appear to have improved; like so much in urban studies, the sorts of issues that are directly relevant to policy-formulators and decision-makers seem to be neglected by researchers.

There might be understandable reasons for that disregard, but these are critical issues so I think it’s worth revisiting the earlier discussion. At that time I drew on a paper published in 2009 by Dr Garry Glazebrook from University of Technology, Sydney, “Taking the con out of convenience: the true cost of transport modes in Sydney“.

His contention is that the key focus of policy shouldn’t just be on subsidies to public transport. He argues that when environmental and other externalities are considered and not just financial subsidies to operators, “cars are in fact subsidised by society to a similar level to that of public transport”.

Although the data he drew on is now getting dated, Glazebrook’s paper is especially valuable because he distinguishes between the private cost of both cars and public transport on the one hand, and the social cost of these modes on the other.

In relation to cars, his calculation of private costs is made up of purchase plus running costs, i.e. fuel, registration, insurance, servicing, tolls and paid parking. His estimate of the social or external costs of cars includes traffic congestion, accidents, emissions, pollution, noise and unpaid parking.

As the exhibit below shows, Glazebrook finds the private cost of car travel is much higher than that for public transport. However, the social cost of cars and public transport — i.e. the sum of subsidies and negative externalities for each mode — is essentially the same at around $0.38 per passenger kilometre. 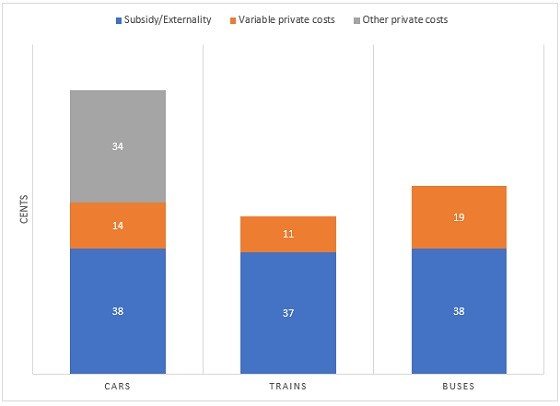 So his analysis finds cars are subsidised as much as public transport. There’s an important difference though, which explains why one subsidy gets more attention from governments than the other.

The subsidy for public transport is mostly a financial cost — it is funded direct from the current budget. Hence, governments worry about it because they have to find the funds in the current term and these necessarily come at the expense of some other expenditure.

The subsidy for cars, however, is mostly an economic cost. The cost of externalities like congestion, pollution and emissions are diffuse and are mostly borne by the community at large, e.g. in the form of slower travel times, poorer long-term health and climate change.

Even where these costs impact the budget — e.g. higher health costs due to pollution-caused sickness — they mostly manifest years down the track and hence are of little interest to the current government.

The study is about costs, so it understandably doesn’t consider benefits. They’re very important, though, because they explain why so many travellers elect to pay extra from their own pockets to drive. Other than in certain circumstances (e.g. congested conditions), cars offer significant speed and convenience benefits relative to the available public transport options in Sydney.

Eliminating the subsidy for car travel would be a political nightmare. The price of petrol would theoretically need to increase by roughly $3.45 per litre to recover the social cost. It wouldn’t need to be that big in practice because motorists would inevitably find ways to adapt — e.g. by shifting to vastly more fuel-efficient cars — but it would nevertheless be very painful.

Congestion accounts for more than half of the social cost of driving, by Dr Glazebrook’s reckoning, so another approach would be to impose congestion charging. Pollution, noise and road casualties can all be addressed, at least up to a point, by improved technology and stronger regulation. Of course these measures would all have their own set of financial costs and they’d be very hard politically too.

If the social costs of driving were  fully recovered the demand for public transport would be higher, but the case for public subsidy would be weaker and would largely rely on equity considerations (in which case the sensible approach would be to target the subsidy exclusively at qualifying passengers).

Railway lines provide a wealth factor in boosting new places for people to live, like country towns or new suburbs. Properties closer to a suburban and now, country railways enjoy more Buyer Value. Vic Rail have profited handsomely from extending commuter travel across the State. Until the capital is employed nothing happens.

This piece of vacuous rubbish could only have been written by someone living 200 metres from Newtown Station or similar. It’s the sort of drivel that regularly comes from inner urban elites who spend most of their waking time sneering at the suburbs as they sip their lattes in a coffee shop 100 metres from their apartment.

What is completely missing is the benefit of convenience in owning a car. Most people don’t have a public transport option near them to pick the kids up from school, go to the supermarket or visit relatives in Maroubra when you happen to live in North Ryde.

The motor vehicle is a huge convenience to all of us and a symbol of our prosperity as a nation. That’s why most of us own one and those who don’t are considered disadvantaged. Only someone who doesn’t own or need a car would call pollution or congestion a “socialised” cost and argue against it.

It’s such a pity that there are so many of those dang car owning suburbanites and that they vote.

Calm down, David Hand, and read it more carefully – he does mention the convenience of owning a car.
I don’t think anyone is advocating banning car ownership. But if public transport were better, we would all probably use it more for many (but not all!) journeys.
After all, that’s what happens in Zurich, that hotbed of Socialism.

Might think differently if your house was acquired to be knocked down for a new toll road too.

Sometimes, David, you poison yourself with your own venom.

“What is completely missing is the benefit of convenience in owning a car.

Copy and paste from the article:

Points for getting “urban elites”, “sneering” and latte sipping into a single sentence though.