You cannot heal the sick through tolerance and understanding

The greatest hurdle to treatment for mental illness is, in most cases, the lack of it. And feel-good "RUOK" campaigns are not going to fix the problem. 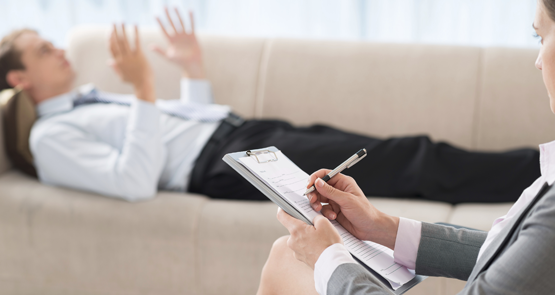 In news that surprised no one who ever tried to book a decent shrink, the national approach to public mental health services turns out to be at least as cracked as those of us it fails to serve. In a comprehensive report provided to government in November and leaked in full to Crikey last week, the National Mental Health Commission found, in short, that things were shit and required urgent address somewhere east of yesterday.

This particular conversation about mental health is pretty bleak. It’s far less fiery than that fuelled by Mark Latham’s bio-waste on the topic and produces none of the headlines or hot takes about “reaching out” that leave my colleague Guy Rundle so cold. This is not a warm story about our need to understand mental illness and help those in need. It’s one that reveals the icy truth that those who are mentally unwell largely have no one to help them.

As reported, the National Review of Mental Health Programmes and Services determined that community-based services and early intervention programs were underfunded. Patients and their advocates know this very well, as does The Royal Australian and New Zealand College of Psychiatrists, which carefully welcomed the review’s call for systemic change but wasn’t so keen on its “absence of a clear funding model”.

The review was working to roughly the same unclear conditions that Health Minister Sussan Ley announced for Medicare yesterday: you’re not getting any more money, so just audit a path to good health. There’s a funding envelope whose recipient is simply advised to exercise more efficient spending.

It was to precisely this order that the review leaked last week was written. When asked about recommendations that included the redirection of funds from emergency hospital services to early intervention programs, the chair of the commission, Allan Fels, said “If there is a fixed budget we have to work within that.” While Fels’ ounce-of-prevention might be based in fair-minded thrift, it is predicted by some experts to create disaster by the imperial ton.

We have to work with what we’ve got, but what we’ve got might turn out not to be workable. David Mitchell, head of the school of psychiatry at UNSW Australia, says meaningful treatment within current funding levels is not possible. Taking money from one critically under-funded mental health service and giving it to another critically under-funded mental health service is no sustainable solution.

Nor, perhaps, is another of the review’s recommendations, that income support to mentally unwell people be redirected to early intervention programs. Surely savings in Disability Support Pension spending is the outcome of a better mental health system, not its starting point.

Poverty, an affliction that is so often the effect or the cause of mental illness, is yet to be fixed by austerity. There’s no reason to suspect that austerity will work to fix mental illness itself.

The review permits itself to be half-aware of this and suggests that responsibility for preventive treatment may extend beyond health services. Even from within a strict funding envelope, it could not fail to address the fact that poor social and economic conditions, such as those endured so disproportionately by Australian Aboriginal and Torres Strait Islander peoples, produce particular mental illnesses.

But the trying and terrible fact is that such review can only be currently written from within a Sisyphean cycle of failure. If we fail to spend our way to a cure, then the cure for that failure of spending is not to spend any more. Mitchell’s professional frustration at the review’s collusion with this cycle is entirely reasonable.

It is also almost entirely overlooked in the current public conversation on mental illness.

Earnest articles on the mental health “epidemic” appear daily in popular press and we are reminded that “one in four” will suffer and that we must “end the stigma” and “reach out” and ask “RUOK?”. Media outlets tell us how we can help but rarely tell government the same. Very few media concern themselves with the very few services actually available to those in greatest need. They’d rather tell us how to make a better effort for a friend.

The recent review has been forced by budgetary stipulations to comply with the idea that it is better effort, and not better funding, that will heal the sick. Journalists and television producers have no such excuse. Nor, for that matter, does Beyondblue, whose solution to the problem of mental illness experienced by Australian Aboriginal and Torres Strait Islander peoples is to instruct non-indigenous people to sit next to them on the bus.

This is not to say that a campaign that depicts the pain inflicted by acts of unexamined racism is in itself a bad idea. But it is a terrible idea in the context of mental health. There are clear reasons indigenous Australians cop such a shit lot, and these can be traced to and located in the present.

To extend the “RUOK?” placebo to a demographic that has so long been ripped off by institutions and say that poor mental health outcomes can be fixed not by institutional reform, but by individuals watching their manners, is utter liberal nonsense.

This utter liberal nonsense informs so much popular discourse on mental illness. It is not a dangerously under-funded healthcare system that is the focus of frequent feelpinion on the matter of mental health but a relentless cry to “just understand”.

This demand for tolerant patience for sick people is not going to help them get well. Of course, it might be nice if twits like Latham didn’t think of people in real pain as malingerers. But even if we reform twits like Latham, it’s going to make no difference at all to those who need access to subsidised care.

Most often, I suspect, those who do write and broadcast about the urgent need for individual tolerance and warmth have rarely themselves experienced urgent need for public mental health services. While their greatest hurdle to treatment may have been the disapproval of others, this is not the common case.

The greatest hurdle to treatment is, in most cases, the lack of it. And until we begin to address this very material problem in very material terms, we’ll keep applying the sticking plaster of love and tolerance to a gaping, growing wound.

I think part of the problem is a refusal to see that contemporary society kinda sucks. Think too hard about why there are an increasing number of people with ‘mental illness’ and you might have to start critiquing how our society functions. Much easier to blame everyone for not being Aware enough, not Talking About It, asking their mates RUOK.

We’ll never get lives without suffering, but there comes a point where you have to ask, does living today just produce Sad people? Is the problem that we live in basically a cyberpunk novel at this point?

Here, here Helen.
There are a great deal of skilled and experienced mental health workers who aren’t Psychiatrists (nurse practitioners are one group but there a few employed) and it’s a shame that these people cannot be utilised better to treat people who need help. The problem is that all these workers can’t make treatment decisions and the patient has to wait to see a Psychiatrist to begin treatment. So much valuable time wasted in waiting.

I agree. Surely being asked “Are you OK?” by anyone other than someone very intimate would just come across as intrusive.

Since the early 1980s we have removed serious mental hospital accommodation. I remember my own sister put onto the street from a half way house ward. This caused massive incarceration in prisons and massive homelessness. Many of these inmates could not function long term. The lurk was in NSW anyway, to flog off what was often prime real estate. Of course the money was to be spent on “new treatments” and “community care” well what bullshit. We pulled down the old system and never built the new one. Now we have to build “special care wards” which have nowhere near enough beds and are often a serious risk to the staff. My wife was an on call crisis psychologist. Whatever you say helen goes triple for remote and rural Australia where there are bugger all trained staff. Trust me a video conference just doesn’t cut it.

Yes. @old greybeard. I wrote this not only in the wake of the review but the fact of a friend who is facing homelessness as the direct result of an inert mental health system. One which doesn’t even have sufficient beds for emergency patients let alone “fat” to cut for use by ongoing care facilities. The effing money that could be saved with even regular access to pharmacological advice would exceed the sale of all the old institutional buildings, some now converted to luxury apartments.
The old system of care was far from perfect. But the new “system”, as you rightly say, just doesn’t exist.