‘War destroys everything’: the long, painful process of rebuilding Gaza

The recent conflict with Israel has left the Gaza Strip in a shambles, with piles of rubble where apartment buildings used to be. Freelance journalist Nigel O'Connor finds out what life is like -- and finds it's about to get a lot worse. 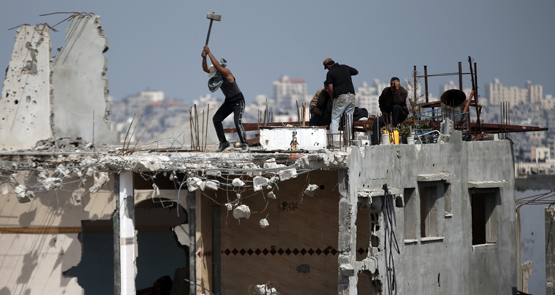 Workers demolish the remnants of a bombed building in Gaza

Civilians made up the majority of the 2104 people killed as Israel’s air, naval and ground forces launched their third major assault since December 2008. Although the assault dealt a blow to the capacity of the Izz ad-Din al-Qassam Brigades, the armed wing of Hamas and the largest faction in Gaza, al-Qassam and other militant groups have begun the work of training new recruits and preparing for another conflict. Hamas, the Muslim Brotherhood offshoot that has controlled Gaza since 2006, remains firmly in control of the besieged enclave.

Israel’s offensive reduced entire neighborhoods to rubble, with over 17,000 homes destroyed or severely damaged. More than 7000 people remain sheltered in UN schools. In Shujaiyeh, a neighborhood east of Gaza City, work to clear debris is underway, with some flattened buildings now vacant lots while others remain slabs of collapsed concrete where roofs or entire floors have flattened their foundations. Tents have been erected on the sites of destroyed homes to signify ownership. Surrounding apartment buildings and homes are pock marked with shrapnel, concrete facades left with torn scars and gaping holes girded by metal rods. In an industrial zone factories have been pounded into masses of contorted metal. Some small works making bricks from sand, gravel and cement is underway. The view of the city reveals a skyline of smashed buildings, twisted metal and bombed minarets. Regular Hamas military and police checkpoints watch movement on the streets and at the border with Israel.

“War destroys everything, and we start again from zero,” Hamdan Najari, from Khuzar village near the southern Khan Younis refugee camp, told Crikey. Members of the Najari family had built houses adjacent to ancestral farmland close to the Israeli border. Hamdan said residents had been evacuated before 63 houses in the area were bombed last year. The occupants now live in nearby caravans.

The Najaris maintain some income by allowing debris from destroyed buildings to be dumped on their land. A large mound of rubble rises next to a makeshift shelter occupied by a young family. Pieces of tiles, clothing, foam mattresses and plastic piping protrude from the heaped pile. Hamdan says they have been able make some money by reclaiming scrap metal from the waste. One tonne fetches around $500.

“We take a few dollars to eat only. Our sons are without jobs and have nothing to do,” he said.

Unemployment has reached 50% in Gaza — the highest recorded. Construction, industry and agriculture, the three largest private-sector employers, have not recovered from the destruction of the summer. Israel’s blockade prevents the import of construction materials, while Egypt’s closure of the southern Rafah border and destruction of Gaza’s tunnel network chokes economic activity. International donors have delivered only 5% of the $5.4 billion of funds pledged for reconstruction work. Hamas has been unable to pay the salaries of civil servants since November 2013. Last month government workers received a little over $300. Water shortages and frequent power blackouts are daily realities for residents.

Divisions between Hamas and Fatah, the party controlling the West Bank-based Palestinian Authority, have been blamed for delays in the commencement of reconstruction work. More than 1 million of Gaza’s citizens are reliant on food aid, and with poverty rising, militant groups rearming and few indications the situation will improve, fears of a humanitarian crisis are growing.

“Winter isn’t that far away in terms of construction,” UN Refugee and Works Agency deputy director Scott Anderson told Crikey. “We had some good graces last year because of the response during the conflict because we were very active in the community, but we won’t have that leniency next year in the community, which is very justifiable and understandable. We’ve got about eight months to get some progress made or people are going to be pretty angry.”

Of the $720 million required to complete assessments on damage from the war, only $175 million has been received or pledged, according to Anderson. UNRWA has recently been targeted by demonstrations calling for reconstruction work to begin.

“Who else are they going to protest against? We’re quite visible, and we’re a safe option,” Anderson said. “Demonstrations have been peaceful and well-behaved, but it’s an indication that there’s an underlying unhappiness with the response of the international community and how fast it’s moved. The biggest challenge we face is managing expectations. You make these large announcements about the Gaza reconstruction mechanism and say the cement is going to flow in so people expect cement to flow but it’s not, that’s the problem. It comes down to the funding.”

Optimism for an easing of Gaza’s citizens’ plight comes in the figure of Major General Yoav Mordechai, head of the Israeli army’s co-ordination for civil affairs in the occupied Palestinian territories. He is understood to recognise the link between Israel’s security concerns and the situation in Gaza.

“I think we’ve seen a shift in Israeli policy,” said Anderson. “With General Mordichai came a noticeable change in how they approached the situation. He firmly thinks that what goes on here in Gaza affects the security of Israel, and I agree with him. It’s not going to apply to everybody, because no solution ever does, but if everybody has a job at least it’s a dignified existence until the political process delivers [for Palestinians].”

The sentiment was reflected by Hatem Owida, deputy minister for economy in Gaza, who told Crikey Hamas had received word via Qatari officials that Israel would seek to allow the entry of construction materials through its Karam Shalom border crossing.

“Until now the situation is really critical in Gaza, and we expect that if Israel does not ease the restrictions on the entry of construction materials and raw materials the situation will become very difficult,” he said. “But we hope things will improve in the coming months.”

The Gaza Strip: A Crikey wrap

Defence bill mounts for Israel when it can least afford it