SBS insider says The Oz was right ... The Age says Sydney is alright ... and the face of Anzac Day's story ...

Jobs and culture change at SBS. The Australian‘s Paul Cleary set a cat among the pigeons at SBS on Monday when he wrote “SBS newsrooms now buzz with young talent and much of it is female, good looking and Anglo-Celtic” in a story looking at the changing faces and tone of SBS News under Jim Carroll.

SBS reporter Ellie Laing took umbrage with the piece, writing in Mumbrella, “What I won’t take is a suggestion that because I’m ‘attractive’, white and a woman it somehow detracts from the credibility and substance of the news service I work for”. Cleary definitely hit a nerve at SBS, with an insider telling us:

“I can say with certainty that the majority of Paul Cleary’s article in The Australian ‘The Changing Faces of SBS’ is accurate and reflects the discontent and concerns of many staff in the newsroom. There are two concerning issues that have not been addressed in any of the recent coverage. Jim Carroll’s predominantly commercial Anglo-Celtic appointments were not hired under a fair and transparent interview process, as public sector organisations are supposed to do. While they may have ample ‘local’ reporting credentials, most (including Ellie Laing) have no experience in international news, foreign language skills or a multicultural background. SBS retains its World News title and until the current management had always hired journalists for their multicultural understanding, linguistic skills or experience in foreign news. This seems no longer a priority in an environment where local news stories are being prioritised and placed higher in the bulletin run down.

“Long-time staff reporters with multicultural backgrounds like Vesna Nazor and Brian Thomson have been relegated to back-of-house producing roles, while others with vast international experience like Greg Navarro haven’t had contracts renewed. Jim Carroll’s new appointments have been hired without a fair and transparent process. Former Ch10 reporter Brett Mason was jettisoned into the role of Europe Correspondent without the position being advertised or any internal candidates being given a formal interview. This might happen at commercial networks, but would never happen at the ABC, where correspondent positions are filled after a thorough and public process. Similarly, when SBS employees with permanent staff positions resign, other internal candidates are not afforded an interview and an external candidate from a commercial network is given a one or two-year contract instead. This happened with Jessica Rich and Alyshia Gates. Once again, both have ample local news experience , but no knowledge of international or multicultural affairs. Is this a conspiracy to render SBS irrelevant by steering it well away from its charter?”

In contrast, other sources tell us that the other national broadcaster, the ABC, is forced to advertise roles publicly, even when there is an internal candidate who is an obvious choice for the role. Crikey understands that Mason was appointed before Carroll took on the news director role. We put the claims about SBS’ hiring policy to a spokesperson and were told:

“SBS has a robust merit selection process for recruitment. Employment decisions are based on journalistic capability and the SBS Newsroom is more diverse than ever. The integration of SBS’ television, radio and online news teams has seen the creation of new cross-platform positions, which have been predominantly filled by SBS employees promoted internally, as well as new recruits, with new ‘on camera’ opportunities for journalists of Chinese, Zambian, Sri Lankan, Indonesian, Lebanese, Croatian, Greek, Hungarian and indigenous heritage, amongst others. SBS has also re-signed many existing staff members, including our main news presenters, being of South African, Singaporean, Portuguese, Greek and including ‘Anglo-Celtic’ background, and this again is on the basis of their journalistic capability and capacity to generate stories.”

“SBS continues to be the market leader in the depth and detail of coverage of international news and this remains an absolute priority. We have enhanced our international coverage, using our limited resources to send reporters to cover major overseas events more often than we did in the past, including utilising SBS first dedicated Europe Correspondent Brett Mason, and our strong relationships with international broadcasters. We appointed an International Editor last year to ensure SBS can deliver the best coverage possible on global issues and events across our television, radio and online news platforms. At the same time we have improved the quality of our domestic content, covering more multicultural stories from diverse communities in Australia in line with the SBS Charter, while framing local stories in a global context.”

Another unidentified soldier. The newsletters sent out by government MPs informing constituents about local Anzac Day commemorations feature a striking photo of a Digger, leading one tipster to want to know more about him and where the photo came from. 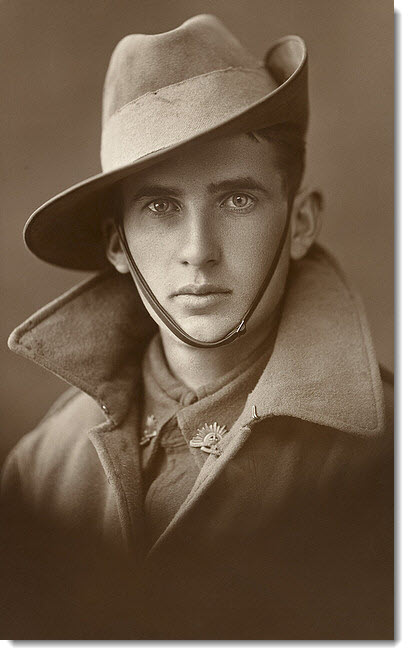 A bit of digging revealed the photo is on Flickr and it belongs to the Australian War Memorial, although it has no known copyright restrictions. The identity of the man, where he served and how he fared, is unknown. This is the pic’s description:

“The photograph was probably taken in Australia, pre-embarkation, sometime between 1915 and 1918. Featured in the Memorial’s 2008 exhibition Icon and Archive, the identity of this striking-looking man is not known and the Memorial had a lot of responses from people with possible identifications, none of which have been him.”

James Packer an Israeli citizen? James Packer’s interest in investing in Israel has already been reported on, with the casino mogul wining and dining politicians and movie stars as he looks at new business opportunities. A tipster pointed out to us that Packer got a special mention from TV producer Brett Ratner at an Anti Defamation League event on Monday night in the US.

The ADL is a US group  that describes itself as “the nation’s premier civil rights/human relations agency, ADL fights anti-Semitism and all forms of bigotry, defends democratic ideals and protects civil rights for all”. The report says:

“‘I want to thank my partner who is here tonight, James Packer. Thanks to him, my dreams have come true and now I actually finance my own movies. Thank you, James.

“Australian billionaire Packer had a flight to Israel to catch later on Monday, where Ratner says Packer has recently become an Israeli citizen. ‘He lives next door to Bibi Netanyahu,’ Ratner added.”

Is the citizenship thing a joke? Wouldn’t be the first time an Australian media mogul had jumped ship to another country for business reasons …

Lobbying not for the faint-hearted. Democracy’s for sale in the United States — but there’s a certain amount of sticker shock for anyone seriously in the market. MapLight is a non-partisan non-profit in the US that tracks money in politics, and this week published its first quarter 2015 list of the big lobbying spenders in Washington DC, based on returns organisations must file with Congress (no such requirement applies here, alas).

The US Chamber of Commerce spent nearly US$14 million ($A18 million), and another US$5.7 million via an affiliate. Google was the biggest single individual spender, spending US$5.5 million in the quarter.

According to MapLight, the US Chamber of Commerce has spent US$590 million in lobbying since 2008 and US$194 million via an affiliate, General Electric, the biggest company, with US$165 million. Since 2008, the top 20 companies and peak bodies on the lobbying list have spent over US$3 billion lobbying lawmakers. Any wonder K Street is such a popular destination for politicians, political staffers, former military brass and senior officials?

Start those needles. Yesterday we reported that the tattooing industry in Queensland was lobbying the state government to change regulations that require a tattooist to reapply for a licence inked just 12 months prior — fingerprints, criminal checks and all. We put that to the Office of Fair Trading, which told us it had already started advising people who need to reapply and that a review has been called into how the laws are working in practice:

“The Queensland Tattoo Parlours Act 2013 was modelled on similar legislation in New South Wales. The re-application requirement reflects the Act’s intent to both remove criminal associates from, and prevent their entry into, the industry. A task force to review the 2013 organised crime laws is being established to examine how to best improve legislation and deliver safe and just communities right across the state. It will report back to the Government by December 2015 about how that can best be done.

“The Office of Fair Trading (OFT) is aware of the industry’s concerns with regard to the lack of a renewal process. The legislation governing the licencing of tattooists is part of the review.”

Storm one day, beautiful the next. We hear that the sky in Sydney is starting to look its normal sunny self after days of damaging storms, but when this wraparound advertisement appeared on the homepage of The Age‘s website yesterday, the timing seemed a bit off. “Love every second” of Sydney in winter, it says — just maybe not in autumn. 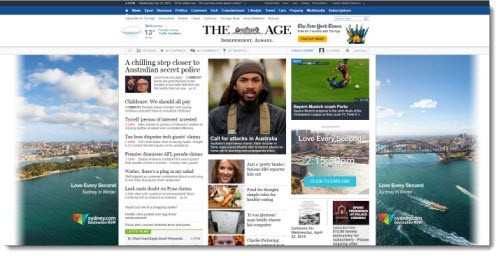 Margaret Pomeranz: There has been a cultural genocide at SBS