Senate reform and the outsourcing of democracy 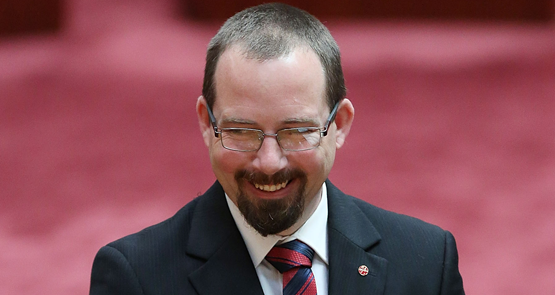 If there’s a consensus in Australian mainstream politics currently, it’s for Senate reform, right across the political divide. Liberals, Nationals, the Greens, Labor and South Australian independent Nick Xenophon all agree that reform is needed, perhaps via partial optional preferential voting above the line for the Senate, to end preference deals between parties determining Senate spots and micro-parties fluking their way into the Senate via networks of preference deals. Only the government’s unwillingness to alienate the current crossbench appears to stand in the way of change.

The commentariat is strongly in favour of reform, too. The Australian has savaged the “the misfits, misanthropes and layabouts” of the Senate for failing to pass the government’s legislation; its Canberra bureau chief Phillip Hudson called the case for reform “urgent”.

Initially, far right economist Terry McCrann thought the new Senate was great and celebrated how it was “non-left” but then changed his mind when it blocked the Coalition’s disastrous FOFA repeal. Last Monday, The Sydney Morning Herald editorialised that the “need to change how senators are elected is more pressing than ever”. The business community also wants Senate voting changed.

The initial loathing of the Senate produced by the 2013 election was because of its undemocratic, “lucky dip” nature. And, true, David Leyonhjelm in NSW was only elected because he benefited from the donkey vote and a similar name to the Liberals. Family First in South Australia couldn’t even manage 4% of the vote, and Bob Day still fluked his way onto the red leather, while Ricky Muir in Victoria got one half of one per cent of the vote.

But the “undemocratic” tag doesn’t go too far. The Palmer United Party scored nearly 10% of the vote in Queensland, giving Glenn Lazarus reasonable democratic credentials. In the WA Senate rerun, the PUP garnered over 12% of the vote, almost enough to secure a quota in its own right.

Even in Tasmania, Jacqui Lambie made it into the Senate off a PUP vote of just under 6.6% — making PUP far and away the most successful party after the Liberals, Labor and the Greens. And Xenophon could almost secure a second quota in his own right in South Australia.

More recently, it has been the “obstructionist” and “feral” nature of the crossbench that has been used to justify calls for an overhaul, particularly by right-wing commentators who have seen their dreams of a “non-left” Senate disappear before their eyes. But strangely forgotten in that discussion is that the Gillard government, while having a Greens-Labor majority in the Senate, had to deal with a crossbench in the House of Representatives and yet still managed to secure an extensive program of often controversial legislation.

Moreover, despite the government’s demonstrated ineptitude in negotiating with crossbenchers, it was the “feral” Senate crossbench that allowed Tony Abbott to implement two key commitments, the repeal of the mining tax and the carbon price.

And if you tease out the “Senate reform” arguments, their inconsistency with other common political arguments becomes clearer: inconsistent not merely in terms of partisanship — it was fine for Abbott in opposition to block Labor’s efforts to reduce welfare spending, but when the crossbench tries to block Abbott’s efforts to do the same, it’s crass populism and demonstrative of the need for reform — but in our conception of modern politics and its problems.

There are few commentators who believe the growing professionalisation of politics is a good thing: the result is more career politicians, who lack the real-world experience of a job outside public life and an instinctive understanding of the community, politicians who are more risk-averse, less willing to challenge entrenched interests on their own side and who communicate less effectively than previous generations of politicians.

“While the case for Senate reform might be … a strong one, it would only serve to strengthen the politics-as-usual that has both alienated an increasing number of voters and has been the product of declining participation.”

Labor has long been the worst party for this emerging trend because of its union links, but increasingly Liberal politicians and even Greens MPs are career politicians from a young age. And the rise of professional politicians has been accompanied by a growing sense of the inauthenticity of our leaders — one of the reasons politicians love to don hard hats and high-vis vests is that such accoutrements of a “real job” lend them — they think — the appearance of authenticity, when to the viewers for whom such images are crafted they simply look incongruous and silly.

Authenticity in politics is thus prized, especially by the media. Politicians who are “plain speaking” are valued over the horde of polished professionals who stick to the party-issued talking points of the day; those prepared to stand up for their beliefs against their colleagues are celebrated, unless their beliefs are extreme and out of touch with the community. And all the time, the media became ever more critical of the media management of the major parties.

But one can be too authentic: both Muir and Lambie, for example, have been criticised for, in effect, being too much like ordinary Australians, although Muir has slowly undergone an image transformation from out-of-his-depth, poo-throwing gull to thoughtful tribune of the revheads, while Lambie has receded into an increasingly Hansonesque combination of xenophobia and economic interventionism.

The Senate reform push assumes such amateurs have no place in politics, and in effect endorses professionalisation: politics is a job that one can only perform effectively after sufficient training within the system, preferably within the established parties. Rise within the system, and your actions are treated differently — one’s obstructionism can be tolerated as effective political gamesmanship in service of achieving power, rather than naive populism or stupidity.

Senate reform would be a culmination of the tendencies of post-war politics in Australia and other Anglophone countries, in which decreasing levels of democratic participation have seen mass membership political parties increasingly replaced by shell parties operated by small cliques, often for their own interests (think NSW Labor) rather than those of the electorate, and which are resistant to internal efforts to introduce more democracy within themselves.

We would thus complete the transition from the mass participation democracy of the post-war years to an outsourced democracy, in which professionally-trained groups organised under brands would tender for the three-year contract to govern Australia.

From a quite different angle, the PUP represented another relatively new phenomenon for Australia, of a billionaire deciding to spend his way into politics; for around $25 million of his own money — rather than the donations of businesses, unions and groups expecting something in return — Clive Palmer bought three Senate spots and, almost by accident, a House of Representatives seat (which he will likely abandon before the next election).

Palmer ludicrously portrayed himself as a political outsider, despite his background as a Nationals staffer and bankroller of the LNP, and was briefly successful until his shark-like need to keep moving politically meant he ended up going in ever-smaller circles, resulting in ever-lower polling numbers and ever-fewer senators.

As the PUP’s 2013 performance demonstrated, overhauling the Senate voting system is no guarantee that new parties won’t be able to break into the system, but they’ll probably need the kind of resources Palmer was able to deploy in order to do so.

Palmer used his money and profile to draw voters who don’t fit easily into established voting groups — from a limited evidence base, they appear to be the kind of socially conservative and economically interventionist voters, more common in Queensland than elsewhere, which Pauline Hanson appealed to and to whom Bob Katter has tried unsuccessfully to craft a national or at least Queensland-wide appeal.

As the political history of the last two decades shows, such voters can be temporarily herded back to the major parties but will make a break for non-mainstream parties if they sense they’re viable. They may be socially backward and economically illiterate, but they are deeply unhappy with the broad direction of public policy in Australia in the last 30 years — the direction endorsed, to varying degrees, by Labor and the Coalition and even, partly, by the Greens.

Then there are the disengaged: the citizens, mostly young, who simply stay off the radar despite the efforts of the political parties — motivated by our ridiculous compulsory voting/public funding model — to force them to vote, or who prefer to vote informal, disenchanted with what the major parties offer.

While the case for Senate reform might be — depending on your point of view — a strong one, it would only serve to strengthen the politics-as-usual that has both alienated an increasing number of voters and has been the product of declining participation. Where once parties hoped to reverse or at least halt the decline in political participation in the community, now they, in effect, want a separation, an official establishment of a political profession as the hired managers of civic life.

“The Senate reform push assumes such amateurs have no place in politics, and in effect endorses professionalisation…”

No it doesn’t Bernard, it assumes that senators should be elected by voters rather than party hacks. No amount of naive newbie charm can outweigh basic democratic principles.

They want to “fix” it because we’re not voting the Right way?
[Was the same mob as agitated about conservative stooge and Conroy monster “Sloppy” Fielding’s disproportionate influence?]
And what about the transmogrification of pre-election promises to post-election cupidity – just what are we voting for when we elect a government that doesn’t honour it’s commitments?
[While they’re about it – committed as they seem to argue they are – how about some reflective proportional Hare-Clark representation in the house of legislation?]

Senate reform is required because the above the line voting, which seemed such a good idea at the time has proven to be irrevocably broken. But rather than endorsing a professional political group I think it does the opposite.

It was the handing of a proxy by above the line voters to the political professional class that enabled Family First senator Steven Fielding to get elected on Labor votes. Since then the proxy system has been spectacularly exploited by micro parties and this must be changed.

Preferential above the line voting would have stopped Muir getting in with 0.5% primary votes.

If they all agree, then NO reform is required.
A bit like the vote for their own pay rises, on which almost 100% agree.

Senate reform is a terrible idea from at least one angle – every voter who considered voting for a minor party at last election will feel less represented than they do now. The appearance of representation is more important the further on the fringe a citizen dwells, and the selfinterested elitism of media and politicians is revolting & revolt-worthy.