Tattoo licences wash off ... Gina's book on the red carpet ... and Fairfax is still making hay from war deaths ...

Another Katter in Canberra? We heard from a tipster that Carl Katter, half-brother of Bob, was looking likely to be preselected as the ALP candidate for the seat of Higgins in Melbourne’s south-east. It’s a blue-ribbon seat, currently held by Liberal Kelly O’Dwyer, who isn’t going anywhere any time soon. We called Carl to ask and he told us that he had put his hand up to run after receiving support from local Labor members. He said he wasn’t sure if anyone was running against him, but there’s a possibility there will be more than one Katter on ballot papers at the next election.

Tattoo licences only skin deep. The tattooing industry is up in arms (in sleeves?) as the first anniversary of the Queensland and NSW governments’ tattoo licensing laws coming into effect approaches. Last year tattoo artists in Queensland and NSW were required to apply for licences to carry on their businesses, which in the Sunshine State required finger and palm prints, police checks and information about their associates. Queensland body artists could apply for one- or three-year terms, and those who opted for a one-year licence are just finding out that to reapply they must go through the whole time-consuming process again, which Tashi Dukanovic, vice-president of the Australian Tattooists Guild, labelled a “ridiculous waste of resources”. We asked the Queensland Department of Fair Trading why the process needed to be completely repeated and if a streamlined process was in the works, but didn’t hear back by deadline.

All-expenses-paid flight to Cambodia? No thanks. Inside sources in Cambodia say that the infamous first flight from Nauru to Pnhom Penh carrying refugees has been delayed from this week until next month. A fact sheet from the Australian Immigration department revealed in Crikey last week signaled that the government wanted the plane to fly on April 20. But the Cambodian goverment’s revelation this week that it has no official applications for migration showed that the families hoping that Cambodia will prove a slightly less bad hellhole than Nauru — it is understood there are as many as five interested — have yet to be fully convinced.

Keep on truckin’. Adelaide lord mayor Stephen Yarwood lost his seat to establishment candidate Martin Haese last year, but he still keeps an eye on his legacy. When a new city council study showing Adelaide’s food trucks weren’t impacting brick-and-mortar businesses was used by local rag The Advertiser to poll small businesses on how bad food trucks were, he exploded, posting a lengthy rant on Facebook about how he was “sick of people thinking they’re experts without ANY facts” (all odd capitalisation his).

“Real research shows food trucks are NOT impacting on established business — businesses closing due to an additional 0.15% of competition IS NOT VIABLE ANYWAY! …

“Stop opposing change because of some made up myth that it’s doing the city harm. Instead of complaining, invest your time thinking strategically about your place in a changing market place and become relevant to your customers. Food trucks bring the city to life and encourage more people to spend more time here — exactly what retail needs!

Some media do a great job of feeding this rubbish and never quote data, facts or research. 0.15% is not an excuse, it’s not a story — it’s bringing our streets, squares and parklands to life … the very issue media have been hammering for years.

“And we wonder why young people bag Adelaide …”

Yarwood was the youngest mayor to ever be elected in Adelaide, winning through an extensive door-knocking campaign targeted at the young urban professionals who’ve been moving into the CBD in recent years. He was endorsed by Premier Jay Weatherill in the election, but that didn’t stop him narrowly losing to Haese. Rumours swirl around whether he’ll soon be recruited by state Labor or the Greens — he’s always said he’s not interested, but there’s a while yet till the next election.

Orange you glad we checked? The Italian-themed Sydney eatery Sopra (part of the expanding Fratelli Fresh chain of stores) has some interesting wines on its wine list, including a house pino grigio, a house sav blanc, as well as a house merlot and a house pinot noir, not to mention the house sangiovese, and of course the house red blend of cabernet franc/merlot, amd the house shiraz from an interesting region of Italy called “Arancia”. A bit fruity, would you say?

Arancia? Not Italy, but the Orange area of central western NSW, as a waitperson translated to bemused diners this week. Is that a wine wank, or pretentiousness in Sydney hard at work?

Rinehart writes on red carpet. Gina “not-an-heiress” Rinehart will be launching her second book on Friday at a Sydney Mining Club event. Rinehart is hosting a sit-down lunch at NSW Parliament House with a presentation about the book titled “from Red Tape to Red Carpet and then some”. It’s catchy — and just in time for Mother’s Day. According to the invite, the book’s title comes from “a phrase made famous by India’s outstanding leader, Prime Minister Narendra Modi, in his desire to reduce regulatory overburden to raise living standards and to increase opportunities for the young. It is a philosophy that Gina shares.” It’s a collection of speeches, in which “Gina puts all of us — including political parties — on notice to stop talking and start doing. She fights for small business and calls out hypocrisy wherever it exists.” It’s a busy time for Rinehart — today the GVK Hancock Alpha coal mine in the Galillee Basin faces a Supreme Court challenge from conservation group Coast and Country. The judicial review application argues that the Land Court that approved the mine last year should have rejected it. We wonder if it will be among the topics of conversation at the launch on Friday.

Brandzac Watch. As we are in the last few days before Anzac Day, we thought all the brands making money on the memory of the Anzacs had been found, but it was not to be. In addition to The Age’s commemorative photos for sale, a tipster has pointed us in the direction of Fairfax’s “Gallipoli 100”-themed online store. The Sydney Morning Herald is selling a range of 28 Gallipoli-related items, including an $80 “Sands of Gallipoli” wall plaque and a $165 stuffed “Stretcher-Bearer Bear” named Private Clarence. Private Clarence comes dressed in full army gear with a set of three replica medals the Anzacs would have been awarded. Though SMH’s online store has placed great focus on the Centenary, the use of the word “Anzac” has been studiously avoided — maybe it didn’t get permission?

Sydney storm. Many of Crikey‘s Sydney-based readers have spent the last 48 hours fighting against the weather, but one found another enemy within the storm:

“Driving home from work around 9 pm at the lights at Paddo, things seemed to be quieting down. Too quiet you say … and you’d be right … a green wheelie bin just kind of glided out from the sidewalk across the way and came straight for the cars waiting at the lights and of course being so fucking special it stopped at my car. So I had to get out in the torrential rain and return it to the side of the road where bins should be (well actually tonight bins shouldn’t be on the side of the road even though I know it’s bin night and all, but good citizens of Sydney there’s a freakin cyclone going on so maybe you can skip bin night just this once!) All the way home I noticed a kind of Zombie Bin Apocalypse as they leered and jeered and slid around the sidewalks threatening to jump out and attack the car.”

This car in the neighbourhood of one tipster fell victim to a tree, not a zombie bin: 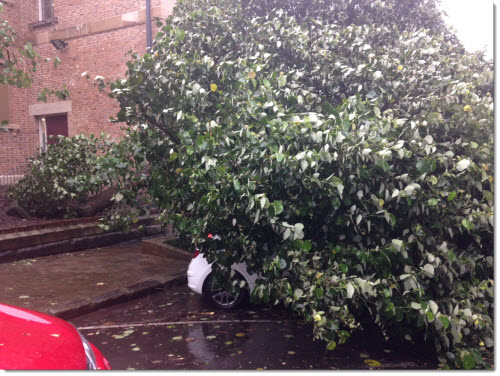 If you have any interesting storm stories or pictures, you can let us know here.