The Tories are back in attack-dog mode, trying to scare the horses over fears of Scottish secession. Plus there are a few good scandals cropping up on the hustings ... 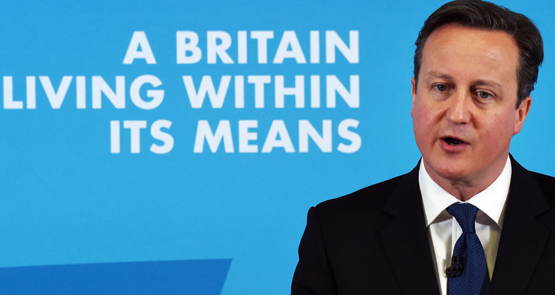 There is disorder under heaven and the situation stinks, as the Chairman did not say. But it’s a widespread sentiment among Conservatives, 16 days out from the election, as the polls refuse to lift. If the current going-in-all-directions-at-once strategy is a dialectical one to express a deeper unity, it is very dialectical indeed. Dialectical for Murder. Dialectical for Election. Dialectical for Lynton. I’ll get back to you on that one.

After a few days confined to positive policies in their manifesto week, the Tories returned to attack-dog mode, focusing on the role the Scottish National Party would play if no one gets a majority. David Cameron’s been going them on the stump — pictured at US/Australian-style deathful workplace appearances, 20 people filmed in the corner of a shed at a woodyard. He’s close to saying that the SNP is an illegitimate party and that Ed Miliband, and the rest of the country would be “held to ransom” by people who “wanted to break it up”.

He was joined today by former PM John Major, who chose a speech at the Solihull Cricket Club in the Midlands to say that a deal with the SNP would “literally cost us all dear”, and that they would stage a series of ultimatums to garner support for a new referendum “until the country was broken up”. Strong stuff, and generally accepted to be directed from the Lynton Crosby centre.

But it’s difficult to know whether this is an attempt to run a campaign on parallel lines in order to produce the final week polling “crossover” that Crosby has promised the Tories, or whether it is the flight path created by a number of people struggling for the controls in a cockpit — with the “crossover” being like those that happen at airshows — usually not well. No sooner had the Scottish feint been launched, with some chance that it might dissuade some voters worried by the increasingly confident and triumphant Nicola Sturgeon and the possibility that the power relationship might be — well, let’s just say that Ed would be the “non-dom”, in another sense of the term, in that pairing.

It was also being contradicted by, of all people, Norman Tebbit, the Chingford skinhead, one of Thatcher’s attack-stoats in the ’80s, and a man venerated by the perpetually angry Tory heartland.  Tebbit is known to loathe Cameron, describing him as a man “who has never lived, straight from university to being special adviser to an advertising agency”, but he’s a good soldier, and so his statement today that the attacks on the SNP were “divisive” and “compounding the problem” — i.e. driving the Union further apart. If you don’t care about anything but winning this election, then that doesn’t matter. But it’s the Conservative and Unionist Party, and some of them genuinely don’t want to help the SNP split it up.

“Whether Cameron would want Johnson galumphing around the country is not difficult to answer, but by now he may well have little choice, and been overruled, the big guns being needed, and his own performance widely judged as underwhelming.”

That had no sooner landed than Boris Johnson appeared, now released from local campaigning to take a more prominent role on the national stage. Kicking off with a blathersome Winston Fauxchillesque piece in the Mail on the weekend “.. this island union is… uniquely threatened …” sort of thing, he came out today to lend a hand — and urged David Cameron to make a more moral response to the thousands of immigrant drownings in the Mediterranean. This appalling-beyond-imagining situation has been created in the most part by the withdrawal of an EU search project called “Mare Nostrum”, which covered the waters close to the Libyan coast — where so many of the drownings are occurring — with the deliberate aim of discouraging the voyages.

Cameron made a biggish thing of withdrawing the money last year, so Johnson’s intervention — which may well be genuine — is also putting Cameron on the spot over a particularly hideous policy failure and could well be seen as the first shot in BoJo’s leadership war. Whether Cameron would want Johnson galumphing around the country is not difficult to answer, but by now he may well have little choice, and been overruled, the big guns being needed, and his own performance widely judged as underwhelming.

By late evening, this minor kerfuffle had yielded to a scandal involving Tory chairman Grant Shapps, the Joker-faced joker who ran a “motivational” web company under a fake name for a year after he’d been elected to Parliament. Wikipedia announced today that it had suspended an editing account that appears to have bigged up Shapps’ entry and inserted disparaging items about a few key Tory rivals and … Lynton Crosby. Shapps, it must be said, denies the accusations and says he will make a complaint against The Guardian, which ran the thing.

… to which Tim Montgomerie, Times columnist and impresario of the Conservative Home blog replied …

That does sound positive. And at 5am tomorrow Team Tory has to get up and deal with it all again. There is disorder under heaven, and the situation is excellent. I’ve got some analysis of that, but gloating recounting appears to have taken up all our time. Dialectical now. You may already have won prizes.

“Mare nostrum” was not an EU initiative, but of the Italian Government. In fact, the rest of the EU is having to be dragged and kicked into providing the rescue services provided by the Italian navy and privately owned merchant vessels. Notably Norway has announced it will provide assistance (while not being a member of the EU)

Tebbitt was usually known as the “Chingford polecat” – presumably for his unwholesome reek as much as his vicious nature in defence of Nanny, may she rust in Hell.