France is locking up people because of what they say on the street. And other Western powers are saying nothing. 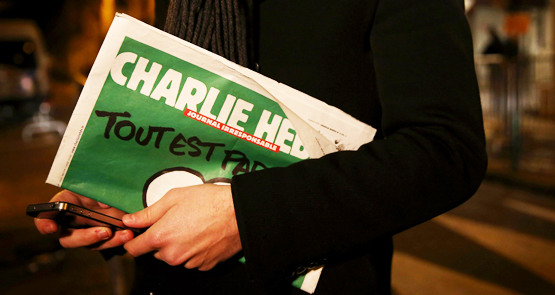 The Kouachi brothers’ lethal attacks on the magazine Charlie Hebdo and the attack on a kosher grocery store called out worldwide solidarity, the former to a greater degree than the latter. They’ve come back into discussion due to some remarks by Doonesbury cartoonist Garry Trudeau concerning the aftermath of the attacks, when a 7 million-copy run of the magazine became little more than a state-sponsored initiative, wherein Trudeau’s remarks have been wilfully misconstructed in the usual manner.

Solidarity quickly turned to farce days after the massacre in January, when a march through Paris was reorganised as an international opportunity for world leaders to strut their stuff — including representatives of countries with a record of killing and jailing journalists, from Turkey to Israel via way of Saudi Arabia and the United States.

Much of their participation was simulation — photos of the world leaders marching at the “head” of the parade had actually been photographed in a side street, with extras behind them to give the appearance of a surging crowd. Never mind, said those defending the campaign: free speech, the idea of it matters above all.

They held the line even when the French state launched a simultaneous crackdown on “hate speech”, targeting everyone from virulently racist groups to those expressing support for armed struggle overseas.

People were arrested under hate speech laws for arguing with police, with some reported cases of extraordinary repression that included people trying to wind the cops up when arrested on minor matters such as travelling without a ticket. One such man told cops “The Kouachi brothers were just the start. I wish I’d been with them to kill more” and got 10 months in prison.

Others were jailed for yelling their support for the brothers outside a police station. A drunk, intellectually disabled man was jailed for six months for saying, “They killed Charlie, I laughed”. Police were called to a school because an eight-year-old had said, “I am with the terrorists” in class.

To call these arrests and inquiries ironic would be to miss the point. The remarks are provocative in the way that Charlie Hebdo was — and is — on paper. But after the Hebdo attack, only a certain type of “free” speech and certain types of speakers were authorised to exercise the glorious heritage of reason and “Western values”. In order to allegedly protect this very narrowed domain of state-authorised free speech, others must be repressed.

What was most predictable was the way in which the right-wing and fellow travelling “free speech” crowd showed little interest in the crackdown and no interest at all in following up what happened to those people who had been arrested for acts of speech.

In the UK, free speech sergeant-majors rounding up recalcitrant troops — writers such as Spiked editor Brendan O’Neill, the former Stalinist David Aaronovitch and the self-regarding conscience of the left, Nick Cohen — have spent no time at all asking what happened to people who had been caught up in legal hysteria and vanished into the harsh French prison system for something they had said in the street.

In Australia there has been a similar silence of the hams, with Andrew Bolt, Tim Blair, Piers Akerman or the like showing no interest in recent months in whether the Hebdo massacre became an excuse to limit free speech (of a certain type), rather than a defence of it.

Now the French government has extended that crackdown further and deeper into French social life, with ongoing surveillance of schools and pupils’ essays, and forceful messages of “authorised” republican values.

It’s becoming clear that the “defence” of free speech in the wake of the Hebdo massacre was a disaster for free speech. The determination of the bully boys to make us all metaphorically link arms with the ambassador of Saudi Arabia, for godsake, rather than to engage critically with the way in which the state was using the cause for its own ends, has shown some people to be the proverbial useful idiots (one should stop using that phrase; it’s become clear that Lenin never said it), and others to be simply uncaring about the application of repression to those with no cultural power. Indeed, whether there is any great concern about free speech is debatable.

“Free speech” is taken as a content-free marker of “Western civilisation” in what is really preparatory work for a renewed “clash of civilisations” i.e. renewed war of power blocs. Many of the “free speech” advocates, from left and right, are making the same trek that occurred in the ’30s — from the centre across the right to the hard right, and something darker.

They protested against lethal killers who, by their actions, showed they had no interest in a dialogue of means and ends. Yet they say nothing to a republic that holds itself up to be the first modern state founded on reason, and thus presumably open to dialogue.

It’s the sort of bleak absurdity that would find a place in Charlie Hebdo — if that publication had not been killed, not by ruthless killers, but by the tender embrace of the state and the creation of authorised  satire. For the long war for freedom no sacrifice is too great, including freedom.

Sure, love thy lockdown, but there’s no evidence to say it’s best done with force

Freedom — can we have too much of a good thing?

Australia is a good student Guy. PM Abbott, the champion of free speech in this country, recently announced that people were sick and tired of Muslims saying things he disagreed with and declared himself prepared to legislate to stop them from doing it. On the positive side, he seems to have forgotten to legislate.

Good (if depressing) reading, Guy.
Looks like we have to burn the village to save it.

In the wilfully misconstruing what Trudeau said stakes, the winner by several lengths in a hard trying field is mad Mark brainStain (soon to visit Oz as a guest of the IPA et al) who makes him out to be a muzzy apologist.
Not as if Abbotrocious could even understand the contortions required to defend freedom by destroying it but he’ll do what he’s told.

There is a question over whether the Charlie Hebdo affair was a state-sponsored false flag event. That magazine was suspicious, as was its building security. The job was done by pros. There are suspicious ‘random’ photos and videos of the event, including a ‘dead cop shot in the head’ where the shot missed by a mile. Is French Intelligence in on the act? Is it now all of NATO vs Russia and China and a couple of their selected middle eastern allies like Syria? In which case the whole thing takes on a much more sinister hue.