Poll Bludger: not easy being Green, but party’s over for Democrats

The Democrats' status as protest party made it hostage to political circumstances and victim to potent competitors. 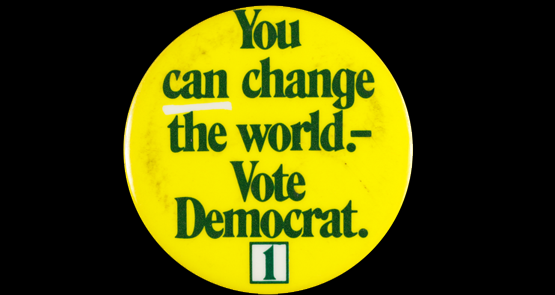 The body has been cold for a full decade now, but the official demise of the Australian Democrats last week deserves more than a few words in passing. The party’s disappearance as an effective political force has been the most significant change to the Australian party system in a generation.

The party was founded in 1977 by Don Chipp, a former Liberal minister who had established his moderate credentials by liberalising Australia’s antediluvian censorship regime in the years before the Coalition’s defeat in 1972.

Coming in the wake of the 1975 trauma, Chipp’s call for “a third political force, representing middle-of-the-road policies” struck a powerful chord. The party scored over 11% of the Senate vote on debut, and put an end to the Fraser government’s parliamentary dominance by securing the balance of power in 1981.

Yet its stated mission of placing itself between two brawling camps of dishonest bastards entailed a contradiction that makes it seem remarkable, in hindsight, that it survived and prospered for as long as it did.

The disturbance of 1975 notwithstanding, the Australian Democrats emerged at a time when political scientists throughout the Western world were observing the rise of “catch-all politics”, in which weakening class identification was causing parties of the centre-left and centre-right to converge in pursuit of a growing pool of voters who were unmoored from traditional partisan loyalties.

As Labor, in particular, disengaged from its shrinking blue-collar base to lead the charge for economic liberalisation in the 1980s, the Democrats’ market gap increasingly turned out to be not in the centre, but on the left.

Yet much of the Democrats’ electoral support came down not so much to adroit ideological positioning, as to its destination status for protest votes against the systemic entrenchment of the two major parties. This placed it in an intrinsically vulnerable position, with its fortunes hostage to the political circumstances of the hour.

Long before the party’s ultimate collapse after the 2001 election, this shaky foundation was demonstrated when its national Senate vote ballooned from 8.5% to 12.6% amid the interest rates crisis of 1990, only to slump to 5.3% in 1993. Partly this reflected its weak leadership at the time, but the party had also found itself pushed to margins by the ferocity of the contest between Paul Keating and John Hewson over the Coalition’s proposed goods and services tax.

On that occasion it proved able to recover, but when leadership struggles next engulfed the party a decade later, a potent new competitor for the left-of-centre vote had emerged in the shape of a nationally organised Greens party under the leadership of Bob Brown.

In some ways, the Greens have simply taken up where the Democrats left off, becoming a regular feature of balance-of-power figurations in federal and state upper houses and a standard bearer for socially liberal causes. Yet the Greens differ from the Democrats in ways that have had far-reaching consequences.

Most importantly, the Greens’ success has been founded on a much firmer base of support, which has protected the party from the volatility that beset the Democrats — and which seems all but certain to continue doing so in future.

This point can be illustrated with reference to the findings of the Australian Election Study, a post-election survey series that has been conducted by the Australian National University following every election since the Democrats’ heyday in 1987.

Among the many questions asked of respondents is whether they hold a long-term sense of identification with a particular political party. Aggregated results from 1987, 1990 and 1993 show that only about 30% of those who voted for the Democrats did so because they held such a feeling — less than half that for Greens voters in the 2013 survey.

Another telling detail is the strong concentration of support for the Greens support among the young. Among those aged 24 and under, 13.1% of respondents to the 2013 survey reported voting for the Greens — probably an understatement, if evidence from opinion polling is anything to go by — compared with just 3.4% among those aged 65 and over.

For Democrats voters between 1987 and 1993, the equivalent numbers were 6.8% and 4.0%. The clear implication is that the Greens enjoy a far more potent political brand than the Australian Democrats, and that it is only likely to strengthen in years to come.

However, the strength of the Greens’ image has negative as well as positive dimensions, in that those who oppose the party are no less clear about the fact than those who support it. This limits the party’s capacity to absorb votes from those who are simply looking to blow off steam against the major parties.

One of the results that illustrate this point include 71% of Greens voters from the 2013 survey who  identified themselves as middle-class — considerably more than the comparable figure of 51% for Democrats voters a quarter of a century ago, and greater even than the 62% for Liberal voters in the most recent survey.

This state of affairs goes a long way towards explaining the present chaotic configuration of the Senate. As Labor’s primary vote at the last election plunged to a record low of 33.4%, much of the lost support came from working-class voters who remained unwilling to throw their lot in with the Coalition, but were scarcely less hostile to the Greens.

Lacking an established centrist alternative, many such voters responded favourably to the television advertising blitz of the Palmer United Party — which, outside of its home base in Queensland, recorded its strongest support in blue-collar Labor strongholds such as northern Tasmania and the Hunter region of New South Wales.

Poll Bludger: are the Greens cooked?

And one more thing. The Greens have policies. The Dems just had resistance.

The Greens are also part of a global movement, where every Green Party’ is based on the four ‘pillars’ of social and economic equity, grassroots democracy, peace and nonviolence, and ecological sustainability. Every Greens policy stems from the four pillars. This is much more than a Party based on one individual to ‘keep the bastards honest’. To young people who often struggle with the dilemma of where to draw the line between how much they give a sh**t, and how much they let that impact their lives because they feel/know they are fighting a lost cause, the four pillars can have great attraction.

Vale Australian Democrats who brought some balance to politics when the major parties chased their narrow interests. They lasted 27 years. History seems to avoid the concept John Howard brought in the bill for the GST and then negotiated with the Dems to get it legislated. Regrettably the younger people did not see the long term benefit of green issues pursued by loyal members of the Australian Democrats.

Wonder who blue-collar voters will support next election? Since it looks like the Palmer United Party will virtually be a non-entity after this term.