John Oliver, Trevor Noah, Neil deGrasse Tyson and Stephen Colbert are shaking things up across the Pacific. It's time our own hosts do the same, writes freelance writer Peter Green 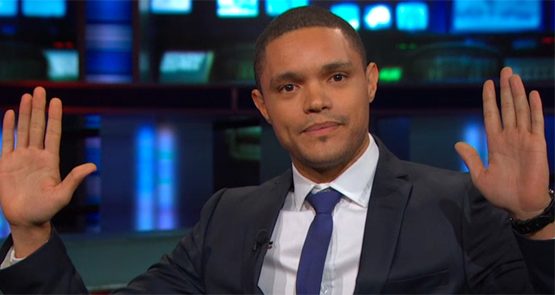 The rise of Last Week Tonight has significantly simplified the life of the 20-something part-time political activist who wants all his Facebook friends to know exactly how he feels about pharmaceutical reps. But John Oliver’s stardom is important for other reasons as well.

His emergence on the American late night scene in mid-2014 signalled the start of a period of dramatic change in a television area that for decades had been owned by a set of middle-aged, white, American voices.

Obviously Oliver doesn’t un-tick many of those boxes, but he was only the first through the door. Since the premiere of Last Week Tonight less than two years ago Larry Wilmore has followed the now well-worn career path out of The Daily Show to carve out his own late-night niche with The Nightly Show. Fellow The Daily Show alumnus Stephen Colbert is also moving on from The Colbert Report to the Late Show, which many presumed would have to be prised from the cold, dead fingers of David Letterman.

Trevor Noah — known to roughly half the internet as a strident anti-Semite and sexist, and to the other half as a paragon of misunderstood virtue — has been given the unimaginable task of replacing Jon Stewart at The Daily Show. James Corden, noted English person, has taken up residence at The Late Late Show. Perhaps most interestingly next month Neil deGrasse Tyson —  the man Dr Karl might like to be — will launch his own late night show on National Geographic, devoted to science, naturally.

It seems then that while the American entertainment industry is ready for a black, Ivy League-educated astrophysicist in an embroidered waistcoat to have his own show — and that’s great, by the way — letting a woman through the door is still a step too far.

While most of these are new shows and most of the old names in late-night TV remain unmoved — Conan O’Brien will likely die on his set and be eaten by Andy Richter —  it is an undeniably significant moment for American television. It signals a desire by at least some part of the American entertainment industry to have a more diverse range of voices in a space that does more to drive the direction of public discourse than it is generally given credit for.

Oliver has come to prominence at a time when more people than ever are distrustful not only of politicians but also of traditional news media. After years of The Daily Show and The Colbert Report struggling with the balance between comedy and journalism, Oliver has managed to bridge the gap between the two forms. In doing so he has achieved the best of both worlds.

Oliver, by virtue of not being American by birth, has the distance from American society necessary to see the problems clearly and without bias. Noah is well placed to bring the same perspective to The Daily Show.

In a less obvious and perhaps more depressing way deGrasse Tyson and Wilmore are also voices from the fringe in American pop culture. Advocating for scientific and minority voices respectively, they offer a critique of American society that is outside the mainstream, but presented in a format that is the very bedrock of US pop culture.

Oliver, Noah and deGrasse Tyson are the next logical step. Where Stewart and Colbert got people interested in politics at a macro level, Oliver has pushed much harder on individual causes and used the internet as a tool to mobilise his loyal fan base in a way that the Comedy Central crowd never really attempted.

Hopefully, Noah will bring some of that 21st-century strategy to The Daily Show, while deGrasse Tyson seems set to continue his life’s work of trying to elevate science to a position of respect and prominence that it probably last occupied during the space race.

America undoubtedly needs this new wave of TV crusaders, but you need only consider the importance of shows like The Project, Clarke and Dawe, Mad As Hell and The Roast to Australia’s political landscape to see why these kinds of changes are important to us as well. Australian TV entertainment has imitated the American model for decades, and our appreciation for the late-night format goes back to the Graham Kennedy era.

I’ve written before about the need for more and better political satire in Australia, but more importantly we need satire where the powerful are interrogated in a way that has mass appeal. We need a The Project with teeth, Clarke and Dawe for those outside the latte belt or The Roast with …  actually The Roast is great, and it’s confusing why it hasn’t been given a better run.

Only time will tell for Charlie Pickering and The Weekly on the ABC, but he would do well to follow the example of those across the Pacific who are going boldly where many have gone before, but doing something new and purposeful with it.