Fairfax is running of out ad inventory for luxury products, and so is expanding Executive Style. And other media tidbits of the day.

2DayFM in breach. After a protracted legal argument over jurisdiction that went all the way to the High Court, the Australian Communications and Media Authority has found 2DayFM owner Southern Cross Austereo in breach of its licensing conditions for its decision to air the royal prank phone call.

The broadcast regulator has not however announced a penalty for the station — it’s still in discussions over this. Reports in recent weeks have suggested the most likely outcome will be 2DayFM being taken off-air for a few hours, costing it advertising revenues it would otherwise have booked.

In its ruling this morning, ACMA pinged 2DayFM for breaching three separate radio codes. One breach was for broadcasting “statements by identifiable persons without their consent”, and another for treating those interviewed on an entertainment program in a “highly demeaning or highly exploitative manner”.

The third breach is of the Broadcasting Services Act, which prohibits the use of a radio license for criminal acts — it was this breach that saw Southern Cross Austereo take ACMA to court, arguing the body had no right to rule on a criminal breach.

The High Court found in ACMA’s favour on appeal, so ACMA’s report details how the Authority “formed the opinion that the licensee had recorded and subsequently broadcast a private conversation without the consent of the parties to that conversation, which are offences under sections 7 and 11 of the Surveillance Devices Act 2007 (NSW)”. Southern Cross Austereo has not been charged and is not currently being investigated for breaching the Surveillance Devices Act, so the finding by ACMA will not result in any further action by other government bodies.

“This is a case where the licensee has breached an important community safeguard,” said ACMA chairman Chris Chapman in a statement. ‘The community rightly expects that broadcasters will not record and broadcast these sorts of private conversations when consent has not been given.” — Myriam Robin 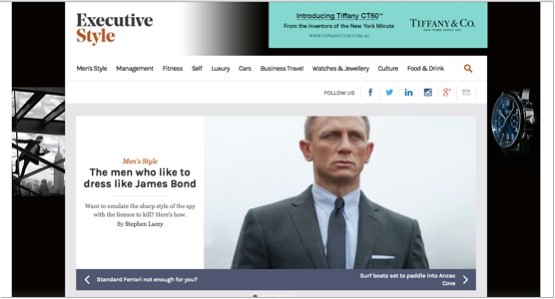 Crikey has heard the new expanded website described as “Daily Life for blokes”, but Sue Bennett, the managing editor of Fairfax’s Life Media, told Crikey she hadn’t thought of it like that. Unlike Daily Life, which has a range of commentary and opinion, Executive Style’s focus is “unashamedly targeted at the exec, or person with a high disposal income, looking at finer things in life”, Bennett said.

The expanded Executive Style launched with advertising partners Audi, Burberry and Tiffany & Co, and Virgin and Jaguar will also be featured in coming weeks. “We want to grow the existing revenue from our premium advertisers,” Bennett said. “By having a standalone website we can create more inventory.”

Fairfax currently has a number of titles that rely on premium luxury advertising. Business Insider, run by the Fairfax-owned Allure Media, runs a great deal of lifestyle content aimed at a similar demographic, and no one could accuse the Fin of slouching on the beat.

It’s a crowded market, also populated by some of News Corp’s premium offerings. But Bennett says that the publisher was consistently selling out of spots on such titles. “We couldn’t meet the demand. We were already getting pressure in that way,” she said.

In a statement, Fairfax said the site would offer advertisers “content-based opportunities to connect with the site’s premium audiences”. “The new ExecutiveStyle.com.au confirms Fairfax’s commitment to grow its Life Media portfolio and audience, bringing greater focus to our titles to further unlock the commercial potential of the brands,” said Fairfax’s Andrew McEvoy, who heads up the Life Media and events division. — Myriam Robin

Maserati madness. Speaking of luxury advertisers, how’s this plug for Maserati. We know the Italian luxury cars (the third best-selling after Ferrari and Lamborghini) are the C-suite car of choice at Fairfax Media (CEO Greg Hywood and Domain boss Anthony Catalano each own one), but did Fairfax’s finance tabloid, The Australian Financial Review, have to make the plug so obvious this morning in a report on the top of Page 7?

“Cashed-up executives buoyed by rising property and equity markets are starting to throw off the last restraint of the global financial crisis, pushing Maserati sales to a local record.

“Maserati Australia and New Zealand general manager Glen Sealey says higher-end buyers are starting to slowly shrug off some of the extreme caution that had been drilled into them after the financial crisis.”

Not another luxury car brand was mentioned. And it’s not that the boom isn’t well known. It was in the industry car sales figures released earlier this month. Crikey reported on the booming sales of all luxury cars two weeks ago. Yes, its been a great March for the Maseratis, but also for Ferrari, Lambos, Bimmers and Mercs, as well as Lexus (Jags are off the boil).  — Glenn Dyer

Pulitzers don’t pay the rent. Here’s one of the sadder stories to come out of the Pulitzer prize presentations. The winner of the local journalism Pulitzer yesterday was the Daily Breeze, a tiny newspaper in Torrance, California, which conducted a massive investigation into how much administrators of the local school district were paid.

The investigation led to new state legislation to prevent excessive salaries, and saw a district superintendent lose his job.

The Daily Breeze shares copy with several other newspapers in the state, and operates with a team of just seven journalists. They didn’t expect to win, and were shocked yesterday to take out the prize.

The investigation, the paper’s staffers told Poynter, wasn’t the result of a tip. It started when Rob Kuznia, who held the education beat, began digging into the issue as part of his normal coverage — the paper would go on to publish over 50 stories by Kuznia and his colleague Rebecca Kimitch on the issue.

“I spoke with [Kuznia] this afternoon and he admitted to a twinge of regret at no longer being a journalist, but he said it was too difficult to make ends meet at the newspaper while renting in the LA area.”

Dramatic Sydney. Pouring skies over coastal New South Wales have given newspapers an abundance of dramatic photos to put on their front pages …

Soaring to the Sky. The Murdoch empire has made a strong start to the March quarter reporting season with its European Pay TV and telco business, Sky, reporting its best quarter for years.

Thanks to the takeovers of Sky Italia and Sky Deutschland from parent 21st century Fox, and solid growth in the UK and Irish markets, Sky said its net subscriber numbers jumped by 242,000 in the quarter. The news in the third quarter trading update revealed that Sky shares hit their highest since the dying days of the tech bubble in late 2000.

Seeing 21st Century Fox controls 39% of Sky, there’s good news and bad from the upbeat quarter for Sky. Earnings rose solidly, but there was also the strongest rise in UK subscribers for 11 years. The bad news?  The update has pushed the Sky’s value out of reach of Fox. Sky shares jumped 5% overnight after  the update’s release, pushing the value of the company to more than $34 billion.

Sky said it added 127,000 new customers from the UK and Ireland in the three months, with the rest of the 242,000 new subscribers coming in Germany and Italy. Sky has now added 446,000 subscribers in the past two quarters. Revenues for the nine months to March rose 5% to 8.45 billion pounds, with earnings before interest, taxation, depreciation and amortisation up 10.7% to 1.5 billion pounds.

The big rebound overnight means the shares are now up more than 18% from February 11 when they fell sharply after the news that the broadcaster had paid a massive 4.2 billion pounds to retain its dominant share of the English Premier League TV coverage for the new contract starting from the 2016-17 season.

Churn fell to just over 10% in the quarter, but that was before the surprise 2.50 to 3-pound-a-month price rise starts shortly, which could boost it. The price rise, the second in six months, was to help pay for the higher EPL cost, 12 months before the new higher fees kick in. Cute! — Glenn Dyer

Front page of the day. The New York Post on the Clinton millions … 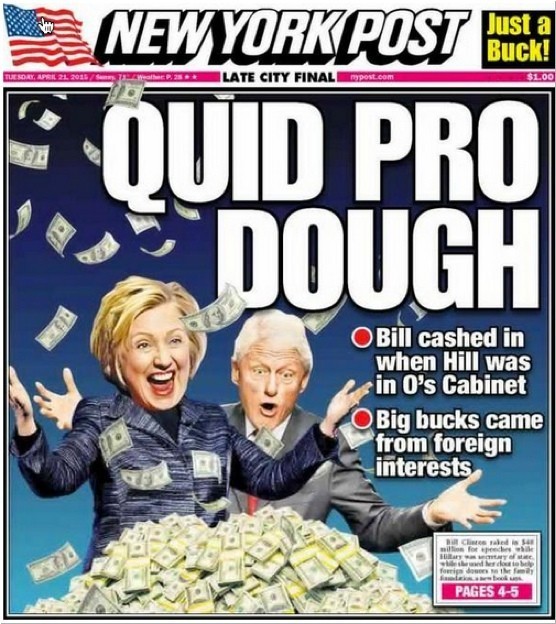 ACMA armed to the teeth: prepare for a media-regulation brawl

Re Executive Style article, ‘gotten’ is not an English or Australian word. It is a US word and has no place in Australian media. A sign of the continuing decline of the sub-=editor class?

There is rarely a sentence in which the verbal weed ‘got’ cannot be deleted. In kindergarten in the 50s we were taught that it is a weak & ugly word, even in its meaning ‘to obtain’, there being so many preferable alternatives.