Broken political promises at state and federal levels got people taking this week.

COAG continued to dominate political news over the past seven days, with a large dose of East-West Link argy bargy thrown in along with the continuing GST conflict and even some coverage of the impending cuts in federal health spending. As a result Victorian Premier Daniel Andrews jumped to second as he held firm on cancelling the multi-billion dollar road project, while WA Premier Colin Barnett was the unhappiest man in the room at COAG as the other states confirmed they would not consider any change to the GST funding formula.

The other Premiers all moved up the list as well, while Health Minister Sussan Ley announced a major re-design of mental health funding and once again ruled out a Medicare co-payment in any form. Perhaps easier to just shout “Delenda Co-Paymentus!” at the start of each speech and presser.

Immigration Minister Peter Dutton also moved up considerably as Australia is believed to have sent around 50 Vietnamese asylum seekers back to Vietnam, although most media continue to be frustrated at the lack of detail being provided by the government about ‘on-water matters’. 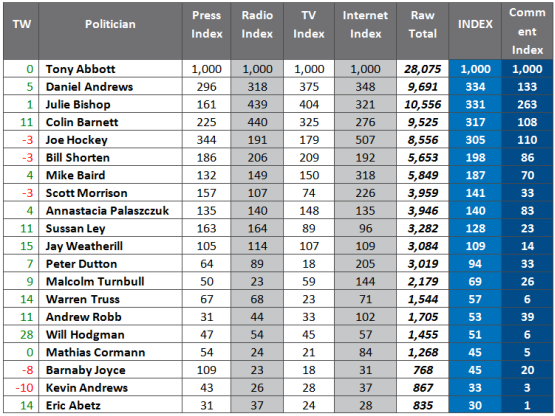 PM Tony Abbott has steadily risen back up to 50k on social media following a big Easter lull, while Foreign Minister Julie Bishop scored plenty of mentions, many about her attire, during her visit to Iran.

A similar story on talkback, although a little more focus on the COAG controversies saw Andrews and Barnett in the top five.

Gwyneth tried to live on food stamps and failed by the fourth day. That’s ok, just proving the point of how hard it is, right? Just a shame the item she couldn’t suffer without was…liquorice.