Small business and entrepreneurship is seen by many as a ticket out of abject poverty. But it's not always that easy. Freelance journalist and PhD candidate Chrisanthi Giotis reports. 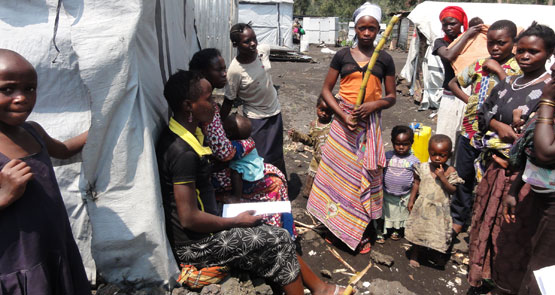 Furaha is 15 years old. When asked the worst thing about living in a refugee camp on the eastern border of the Democratic Republic of Congo she, like everyone else, answers “the hunger”. But then, in a self-conscious gesture reminiscent of so many 15-year-olds, she plucks at her old, ill-fitting T-shirt and says, “also I miss having nice clothes”.

Every morning she wakes early and walks eight kilometres to Virunga National Park, a world-heritage listed place of beauty and hideout for dangerous militia members who have made international headlines for using rape as a weapon of war. Furaha braves this danger to collect sugarcane. Once loaded to capacity she walks back to her “home”, Mugunga refugee camp No. 1 on the outskirts of the city of Goma in the eastern Democratic Republic of Congo (DRC).

She has no sign, stall or cash register, but she has a regular spot where she lays out her wares — the perfectly round, streaked-green sticks whose sinewy insides are sucked and chewed for sweetness and sustenance. Sometimes she takes care of the stall herself, other times she leaves the sales in the hands of friends and neighbours while she attends to other tasks.

She has to take the risk of collecting sugarcane in the forest because the international money has dried up and refugees in Mugunga are no longer being fed. Her parents and brothers were killed in the fighting that brought her to the camp.

In the near future, if all goes well, Furaha is planning to move into the more profitable sale of cassava and potatoes. After that, her dream is to move into the nearby town of Goma and become a successful entrepreneur there.

The peace agreement signed in 2003 means nothing to the militias who stake out land and resources and ensure semi-regular eruptions of violence that even the world’s largest peacekeeping mission — 20,000 UN soldiers headquartered in Goma — can’t eliminate. As recently as 2012, Goma was overrun by militias during what is known as the M23 rebellion.

The M23 rebels didn’t stay long or wreak much havoc in Goma, comparatively speaking, but they decimated villages and smaller towns in neighbouring regions. The important food-producing region of Masisi, considered a Garden of Eden for crop cultivation, was badly affected and remains that way.

During that time, Furaha and most of her neighbours came to Mugunga, which was filled to bursting with 30,000 refugees.

“Goma is an IDP city,” said Salome Ntubaba of Christian Aid in Goma.

In the lingo of the United Nations and the international non-government organisation workers who live in this town, IDP means internally displaced person. They are citizens, like Furaha, fleeing from violence and war but not over a national border.

In 1992, Goma’s population was estimated to be 100,000, when the end of the Cold War also signaled the end of then-president Mobutu Sese Seko’s kleptocratic US-supported reign, and the breakdown of the country known as Zaire began. Estimates of the population today top 1 million.

Ntubaba points out that Mugunga was once considered part of the national park, but now it is more like an outlying suburb of the city.

Ntububa and others estimate that only 25% of the refugees and IDPs in the immediate region are in camps, with the rest supported by the local community.

Kahumbu, a widowed mother of five, is living proof of what a difference that community makes. Kahumbu came to Goma at the same time as Furaha, during the M23 rebellion in 2012, and at first she too went to Mugunga camp.

“My children absolutely refused to stay in the camp,” Kahumbu remembered.

She found a stalled project: a half-built house and a builder-owner who has let her family stay there, rent-free, for the past two years. She will have two more years to get back on her feet before the house is finished.

How to better support people like the builder-owner who has helped Kahumbu has always been the under-acknowledged missing link, and it is now a question asked with urgency by the aid community in Goma — especially since the International Organisation for Migration (IOM) stopped feeding people.

Neighbouring wars and wars further afield have budgetary priority. There is no longer a “general food distribution”; only those classed “most vulnerable” are given food.

IOM head for the region Monique Van Hoof acknowledges the lack of funds was crucial to the food decision but also talks of finding “durable solutions”, envisaged as community-based solutions.

Exactly what the international aid community can do remains to be seen, but the United Nations High Commissioner for Refugees has adopted it as official policy for the DRC in 2015, and several internationals NGOs are changing their practices to support “host communities”.

In the meantime, and with no food, Mugunga camp is emptying. Some are heading back to decimated villages with limited support, others are carving their own paths.

If Goma is a city of migrants, it is also city of enterprise. The city’s landmark is a faux-golden statue of a Tshukudu. This is a wooden bike with an extra long and wide down tube perfect for transporting products through muddy, volcano-rubble-strewn streets and mountain villages. (Watch tshukudus racing here).

Tourists pose for pictures in front of the larger-than-life statue, the handsome driver carrying the whole world — a globe — on his tshukudu. And, indeed, minerals transported by tshukudu are in electronics all over our interconnected world.

In this enterprise-worshipping town, one “durable solution” for NGOs is supporting small businesses; the logic being a strengthened economy means the city’s population can do even more to help refugees and IDPs.

In a suburb of Goma, a co-operative of cooking pot makers is part of this international experiment. Money has come from the West through Christian Aid to the small business lender PIAMF, and then to this business of 15 pot-makers with an innovative pot design that uses less charcoal.

However, small business, especially in Goma, is risky business. The co-operative took a second loan after mass looting during the 2012 M23 Rebellion. They recently signed the lease on a more secure place to store their pots — maybe just in the nick of time.

This year DRC is on knife-edge, with President Joseph Kabila and the UN at loggerheads over military operations against militias. The UN mission may leave. The International Crisis Group says the DRC is one of the 10 wars to watch this year.

Furaha is not on hand when my guide buys all the cane to say thank you to the women for giving interviews. There is a desperate scramble for sugarcane, and the rapaciousness brings Furaha running.

She is furious that such a big deal has been transacted on her behalf. Immediately, I shove another note into her hand, and she gives me a split-second, cheeky half-smile, but continues to berate the women for their impudent and undervalued sale.

An hour and a half later, Furaha is walking through the camp. In her hand she clutches a packet containing a cheap hair extension of the type seen everywhere in Goma. It’s been a highly unusual morning and, freed from cane selling for the rest of the day, there is a bounce in the 15-year-old’s step as she gets ready to spend some time on her hair.

Politics in the Congo

Letter from: Congo worth a visit, even if it’s on ‘don’t go’ list