Razer: being and nothingness and the Material Girl

The Material Girl's true currency has been her ability to point her coned-shaped bra at the making of meaning itself. 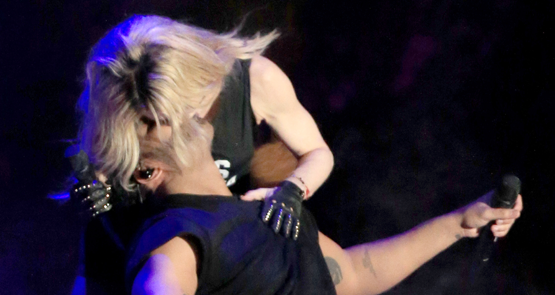 Apparently, many people once had a passion for Madonna unmatched in force by all other feelings until the sting of its recent loss. If you’re not caught up with this latest “shock”, here’s a crib: last week, the veteran pop star planted a kiss on a younger male pop star during a live performance. The younger pop star appeared uncomfortable with what we must suppose was choreographed domination, and there have been three chief reactions to this widely viewed exchange.

“I loved Madonna,” writes Cristina Odone in the Telegraph. In Debrief Daily, Sarah MacDonald, writes that we loved Madonna. An idiot cabal on the Seven network said, “It’s no longer the Madonna we grew up with!” before descending into a sequence of screams like those of the sex before slaughter at a poorly sound-proofed abattoir.

I loved Madonna. We loved Madonna. Madonna used to be great and then she kissed some bloke and now we’re all bleeding on the tiled floor of a world doomed to death.

Perhaps some people feel this way, but they should almost certainly shut up about it. And this is not just because Madonna has failed to ignite sufficient pleasure in me to personally tolerate the mourning of her apparent passing. Rather, it’s because Madonna has been so meaningful for so long, she is no longer capable of generating any meaning at all. Madonna has become, as I believe the semiotics people call it, a floating signifier.

Many worked to demolish the power of the icon Madonna had become. Perhaps most famously, it was a 1990 New York Times essay by Camille Paglia that was the beginning of Madge’s discursive end.

Here, Paglia did a reasonable job of pissing on the worst of third-wave feminism — a knack now beyond the Professor — and appointing Madonna its saviour. There was a book called Deconstructing Madonna and another called The Madonna Connection: Representational Politics, Subcultural Identities, and Cultural Theory,and each of these books described the star as either the embodiment or the end of queer theory, post-colonial thought and/or of Judith Butler’s “gender trouble”.

I did my small bit by submitting 5000 words of nothing to my lecturer on the topic of Madonna. I think I called it Performativity and its Discontents: How Madonna Keeps On Pushin’ My Sex Over the Borderline. You are not only welcome but actually obliged to hate me and my kind for giving postmodernism a bad name.

It didn’t stop, of course, with young wankers like me eager to intellectually justify their love for, if not Madonna, then the new relativism that asked us to read the popular as much as we read the classics.

Just as deconstruction demanded that elite scholarship pretend to embrace mass culture, mass culture pretended to embrace elite ideas. So, just as I was writing an (embarrassing) essay on how Madonna transgressed gender norms, writers of popular journalism were doing, more or less, the same.

When Madonna’s Material Girl was released, it inspired a textual unpacking so thorough, it would have given Derrida the shits. Journalists and talk show hosts asked “what does this mean?” when the young star so obviously mocked the function of woman both as product and labourer in her own production.

To be fair, Madonna deserves some credit as the inspiration for this “what does it mean to be a woman in the ’80s?” conversation as the Material Girl video was confusing and rich. For mine, this was a vision more provocative than any of her silly Night Porter rip-offs where she is trussed up in some kind of sex-matador outfit poised to give a wristy to Vanilla Ice.

The conversation about the meaning of Madonna went on for years. There was little, if anything, outside the text of Madonna and this academic and popular study impacted the language. The word “reinvention” is now stuck to her like Hollywood tape and no pop conversation about “icons” or “images” can be had without reference to her over-production of images of herself.

I am not, as other are, so formerly enamoured of Madonna that I could find myself “confused and conflicted” or “hurt” by anything she does on stage or elsewhere. Notwithstanding this disinterest in Madonna and what she does to provoke sales through mild revulsion, it would be foolish to dismiss her as formerly meaningless.

Like all effective pop, hers offered a critique of the conditions of its production and that she kept this going for nearly a decade — roughly between the flammable vagina of Burning Up and the cool photo-play of Vogue — is a historic achievement. I can’t think of any pop performer so dedicated for so long to a project of critiquing pop.

At her peak, Madonna, who never made especially good records, was in the business not of making meaning but of showing how meaning was made. This made her irresistible to deconstructionists and a great comfort to many young women annoyed with the discomfort of their own defined lot.

The women who were once her most ardent fans now writing that she is a “disappointment” or not sufficiently “edgy” or “feminist” or what-have-you do not correctly recall why they loved her in the first place. It was her refusal to be any identifiable thing or hold any static meaning beyond “icon” — which itself means nothing but meaning itself — that made her so fascinating in her era.

While it is probably true that Madonna’s late “shocking” and “sexy” tactics are every bit as tedious as the journalism that recounts them, it has not always been true. There was a time that she was particularly adept at saying “all of this culture stuff is endless, beautiful rubbish and this is how it is made”.

She was, at her best, the opposite of a role model. She was a powerful reminder of emptiness. To try to fill her now with meaning when she courted our affection by telling us that meaning was on a fast-track to oblivion is the work of forgetful fools.

If you want to talk about shock or gender or age “in the media” — as if that media is now or has ever been a site worthy of social investigation — there are more appropriately boring subjects than Madonna to fulfil your need.

Try that closed-circuit nothing Katy Perry or tolerant debutante Taylor Swift. Let Madonna be remembered for the long and glorious moment of emptiness that she was. Don’t drain her of her most meaningful contribution to the culture, which was a fine performance of nothing.

Debate Club: can pop culture be a force for feminist good?