Rail against the machine as commuter capacity hits overload

Higher fares and regional-centre development are just some of the ways policymakers could reduce peak-hour pressure on Sydney's CBD. 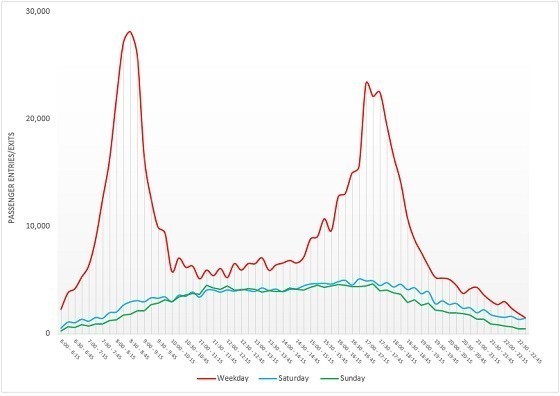 Sydney’s rail system is primarily a commuter system. The NSW Bureau of Transport Statistics‘ new report, Train Statistics 2014, shows that around two-thirds of all weekday train travel in the metropolitan area is in peak periods.

It’s evident from the exhibit that weekday demand for trains is extraordinarily peaked, with the ratio of peak AM weekday demand to midday demand at CBD stations around four to one.

It shows only the Central Business District rail stations but they’re very important; approximately half of all morning peak rail trips terminate or originate in the CBD.

Peaking imposes high costs because the system has to have the capacity to deliver a large number of passengers over a relatively brief period. That requires bigger stations with more staff than it would need if the demand profile was relatively flat like it is on weekends.

It requires higher frequencies and hence more trains, more tracks, more sophisticated signalling, and more staff to manage trains and masses of passengers. The new lines through the city centre being planned for Sydney, Melbourne and Brisbane are needed primarily to meet peak demand.

Unlike Saturdays and Sundays, much of the capacity required to meet weekday peaks isn’t used for the rest of the day. If Sydney could reduce the morning peak demand to (say) the same maximum as the afternoon peak, it’s likely there would be very significant capital and operating cost savings.

There are a number of ways policymakers could reduce peaking (and I expect these are all on the New South Wales government’s radar to a greater or lesser extent).

Perhaps the most straightforward way is through ticket pricing; setting higher fares in the peak relative to the off-peak to encourage commuters — and their employers — to shift their time of travel.

This could be complemented by other policies to encourage travellers to use rail in lieu of cars for off-peak travel.

A longer-term approach would be to aggressively develop regional centres like Parramatta as alternative locations to the CBD for some firms. Government might take the lead in shifting more of its activities out of the city centre.

Another approach would be to acknowledge that peaking in the CBD happens because it provides real advantages, principally coordination and agglomeration benefits for city-centre firms and organisations.

Those beneficiaries could be required to contribute directly to the cost of providing and operating the necessary infrastructure.

There are benefits as well as costs to CBD peaking e.g. a more decentralised land-use pattern might lead to higher levels of car use for commuting. However, given the politicised nature of planning and the many implicit subsidies, it seems highly unlikely that the current “balance” is optimal.

If around 15,000 passengers could be induced to evenly redistribute their time of arrival in the CBD from 8.00 am – 9.00 am to adjoining periods, it would reduce the maximum load at the CBD stations to the same average level as the 5.00 pm – 6.00 pm period.

Would a train to Melbourne Airport be worth it?