How many positive reviews does a Gallipoli drama need to get viewers tuning in? And other media tidbits of the day.

Gallipoli fatigue? The well-reviewed and highly-anticipated two-part drama Deadline Gallipoli drew in just 76,000 viewers on Foxtel’s Showcase on Sunday Night, and even fewer last night, when just 46,000 tuned in. Even for Foxtel, it’s not a large audience, especially for such a highly promoted screening.

On its first night, it didn’t even make the top 20 programs on pay TV, floundering behind multiple episodes of The Simpsons. Last night saw 206,000 Foxtel subscribers tune into Game of Thrones (also on Showcase) when it went live to air at 11 am and 293,000 watched the 7.30pm repeat. The most watched program on subscription TV last night was the NRL game involving Cronulla and South Sydney (Russell Crowe’s side). The game was watched by 338,000 viewers

Advertising for Deadline Gallipolli has been extensive in recent weeks, but the producers are batting away suggestions the poor ratings were a failure, telling IF yesterday that they anticipate time-shifted and catch-up viewing figures will show a healthy final audience. “Deadline Gallipoli is one of the finest drama series that Australia has ever produced,” Matchbox Pictures MD Chris Oliver-Taylor told the website. “The overnight numbers are a solid start to what we hope is a strong week for Foxtel audiences. We will get a sense of the impact of this wonderful series once we see catch up, + 2 and cumulative viewing.”

Meanwhile, Seven’s Monday night screening of Russell Crowe’s The Water Diviner, another Gallipoli drama, drew in an audience of 868,000 in the five cities (and nearly another 500,000 tuned in from regional Australia, not that that matters to advertisers). My Kitchen Rules on the same station drew nearly twice as many viewers.

If Deadline Gallipoli’s full ratings do show it to be a disappointment, it’ll be only the latest Gallipoli-themed TV drama that failed to connect with mass audiences. Nine’s multi-part Gallipoli was famously “burned” through after failing to draw enough viewers — Nine chief David Gyngell went on to describe it at a results briefing as his “biggest disappointment” this year. — Myriam Robin and Glenn Dyer

And the winner is … Dead-tree media outlets dominated the 2015 Pulitzer Prize awards for journalism in New York overnight as online and non-newspaper media outlets failed to have the impact they have had in the last two years. And The Wall Street Journal won its first Pulitzer gong since 2007, when Rupert Murdoch bought the paper.

While that will bring backslapping joy at News Corp papers, the Murdoch clan will no doubt mutter darkly about the group’s New York bete noire, The New York Times, which dominated the awards, winning three. The gold medal for public service journalism, the highest honour among the Pulitzers, went to the Post and Courier of Charleston for a series of reports on deaths from domestic violence in South Carolina.

Last year that category was won by The Guardian UK and The Washington Post for their coverage of government surveillance, based on Edward Snowden’s massive drop of US government secrets, which confirmed the widespread eavesdropping on communications by security groups around the world.

The Pulitzer for local reporting went to The Daily Breeze in Torrance, California, for a series exposing corruption in a school district in the region. The commentary prize went to the Houston Chronicle. The prize for editorial writing went to The Boston Globe.

The Washington Post took the national reporting award for its coverage of scandals at the US Secret Service, and The Seattle Times won for breaking news reporting of a landslide in March 2014. Here’s the full list of 99th annual Pulitzer prize winners. — Glenn Dyer

Photoshop of horrors. Another day, another round of tabloid graphic designers earn their keep. The Daily Tele has photoshopped Bill Shorten into a mob of protesting Shia’s, after he failed to identify the majority denomination in Iraq… 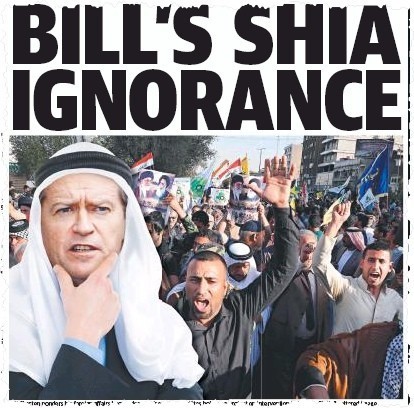 But really, that’s got nothing on this.  The London Evening Standard reckons Ed Milliband’s life story bears a lot in common with that of Poldark, the hero of the BBC’s hit remake of the historical drama. They’ve mocked him up thusly — in his arms is his wife Justine, and below, some of his previous flames in period dress … 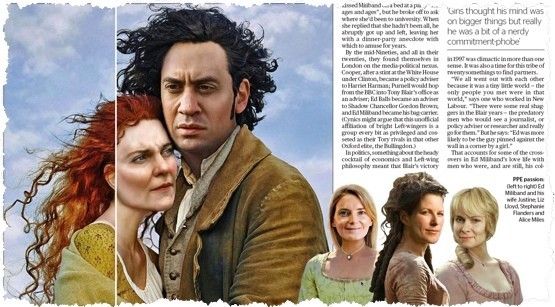 Sky’s limit? The Murdoch clan’s listed companies start releasing their quarterly reports tonight our time, with Sky PLC releasing its March statement in London. Sky is expected to report higher earnings and revenues as the takeovers of Sky Italia and Sky Deutschland make a big impact on business and the bottom line.

But UK analysts will be watching for growth in the UK market, especially among people buying Sky’s teleco (broadband) and mobile services — not so much its basic video (pay TV) services. Sky’s shares are up 10% since it was revealed as lifting its winning bid for retaining the English Premier League soccer rights to a massive 4.2 billion pounds. These results will be the last under the old pricing structure.

Sky revealed a surprise 2.50 pound a month lift in charges for its more than 10 million video subscribers to help pay for that massive cost in the soccer rights. That was the second price rise in six months, and analysts will look at the results for the next two quarters to see if the churn (loss of subscribers) increases as a result.

Meanwhile in Australia, the Murdoch clan affiliate Ten Network has revealed it will release its 2014-15 interim results on Thursday, April 30, 20 days later than the 2014 results release. — Glenn Dyer

No excuse with plenty of subs

Generally the only time I ever ponder whether I would like to be a Foxtel subscriber is when they’re airing new Australian dramas (e.g. Cloudstreet) but I must admit I was quite pleased to not be one this time around – at least I don’t have to feel guilty – or un-Australian – for not wanting to watch their Gallipoli-themed offering. I’ve had my fill and of all the jingoistic schmaltz our politicians and other public figures are heaping upon us and will wait a year or two then buy this one to watch at my leisure.

BSIO. Absobluoodylutely, no disrespect for those that have served, but I am totally fatigued from the last six months in the trenches with the “jingoistic smaltz”.

I agree with the guys above about being tired of nationalistic cheerleading – I suspect that’s a major factor in turning people off Gallipoli TV offerings.

However, I’d suggest also that “appointment viewing” is dying, if not quite dead yet. When I read positive reviews of Nine’s Gallipoli series earlier in the year, I immediately thought “I’ll watch that later, when it’s available to view in my own time” – whether that’s via iTunes or Netflix or whatever. And if it’s not available, so what? I’m awash with other good stuff to watch.

This situation is one reason I really wish Crikey would dump its breathless regular reports on last night’s TV ratings. They’re largely meaningless until you factor in time-shifted viewing.

Further in that topic, I stumbled upon this analysis of why Gallipoli TV hasn’t been rating. Interesting stuff: http://www.historypunk.com/2015/03/my-kitchner-rules-why-arent-australians.html