Gina Rinehart is about to start pumping out 55 million tonnes a year of iron ore from her Roy Hill mine. This is very bad news for Fortescue. 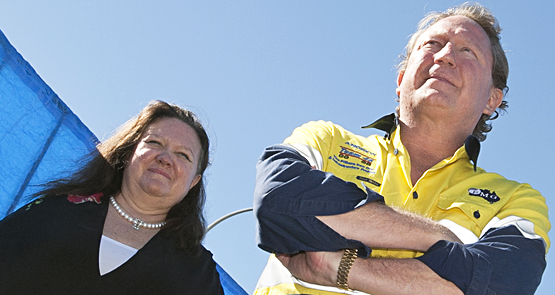 The price of iron ore got some respite last week, but it is likely to be only a dead cat bounce as market analysts took their axes to forecasts yet again.

Although it has risen from a 10-year low of US$46.70 per tonne closing at US$50.80 last night , many analyst have cut their average price for the year to US$40 per tonne, with many predicting a flat price for at lest another 12 months after that.

So this is only a moment of respite for Fortescue Metals Group, which is taking its own chainsaw to costs and is now racing against the clock. FMG is also battling surging production from the existing producers and the imminent entry of FMG chairman and founder Andrew Forrest’s nemesis, Gina Rinehart, into the market with 55 million tonnes a year from Hancock Prospecting’s Roy Hill mine.

There has long been enmity between Western Australia’s iron ore baron and baroness, but Rinehart is poised to get the upper hand when she begins shipping much higher-quality ore from her Roy Hill mine right down the road from FMG’s Chichester mines — the ones with the company’s lowest-grade iron ore.

FMG’s higher impurity ore almost identically tracks the 58% iron ore index rather than the widely used 62% benchmark. At present 58% ore is being marked down at a hefty discount of about 12% and was US$44.10 per tonne. This is logical — when there is oversupply and lower prices (and steel prices have only fallen about 50% as much as iron ore prices), mills will pay up for better.

Rinehart’s mine also has about 40% of its resource as lump, small rocks of ore rather than fines, or powdered ore. Only higher-quality ore can be shipped as lump, and this is Rinehart’s ace. All blast furnaces need some form of rock iron ore, be they pellets (made from compressing fines), sinter, made from heating up fines, or lump — less polluting than sintering. Lump is fetching a US$6 a tonne premium but is expect to rise to an average of about US$10 in coming years. This is a long way of saying Rinehart’s ore will fetch about $16 a tonne more than Forrest’s at current prices. Even FMG’s Chinese shareholder Hunan Valin has expressed interest in Rinehart’s ore, people familiar with the company have said.

It’s worth noting that FMG would be in a far better position if not for its stance on (not) sharing its own railway link to Port Headland — the company would not strike a deal with Rinehart. Had FMG struck a deal with Rinehart, Forrest would have a rail asset and port now worth something. That would be the easiest asset for the company to have sold, perhaps wiping out the debt weighing ever more heavily on its balance sheet. Instead Rinehart’s trains will chug alongside FMGs on assets that are between them not worth much at all as stand-alone businesses.

Crucially, Rinehart’s entry will force FMG further up the iron ore cost curve and towards the invidious position of  being the market’s marginal producer and next cab ready to roll off the failure rank.

Just how under the pump FMG is was all too apparent last week when it unveiled its latest results, with chief executive Nev Power flailing around blaming everyone but FMG itself and its low-quality product for the dire state of the sector.

“So I think there is an absolute issue here of public interest to try and ensure there is the maximum amount of value that we can in our industry. I think governments do need to have a really hard look at what has happened in the industry and to assess how they want to manage it going forward.”

It’s hard to know what planet Power, a fine CEO and good fella, is on — the 11.1% pay rise last year clearly wasn’t enough. If FMG weren’t adding 160 million tonnes to the market the price would be quite a bit higher. And we have a free market in Australia — unlike China the government doesn’t “manage” the mining industry beyond regulation. Maybe he wants the government to make sure his options are in the money?

To try to keep up with its lower-cost, higher-quality rivals, FMG is mining the future, picking out the best ore and less “overburden”, or rubbish rock, than it will need to average in the long term. But this means more overburden down the track and lesser ore  in a desperate bid to sell while it is (and only just) making a margin. But if the price stays down as forecast, this will come back to bite its shareholders soon enough.

The Chinese government now, finally and publicly, appears to be aware of just what a pickle the country’s economy is in. At the weekend it launched what is likely the beginning of a concerted stimulus drive by at the weekend by cutting the reserve rate requirements (RRR) for banks — the percentage of funds that the institutions must keep on hand — by 1%, which surprised observers with its scale.

The aim of this is order to free up more credit for beleaguered business, including and most especially its steel sector, which is still stiffed with overproduction and facing free-falling prices of its products as the property downturn crunches the number of new project starts across the country.

As Crikey has often noted, there is much to admire about Andrew Forrest, including his entrepreneurial drive and dedication, but the whingeing and moaning by executives does neither him nor his put-upon shareholders any favours. His larger, lower-cost competitors seem to be enjoying his predicament, especially the least worst iron ore miner, Rio Tinto, which this morning confirmed its expansion and cost cutting plans were on track to deliver 350 million tonnes this year at costs Forrest can only dream about.

Soon, it will be Gina Rinehart who will emerge as Forrest’s main tormentor and perhaps the straw that will break FMG’s back.

“Twiggy”? That’s probably all that’ll be left after The Iron Ore’s finished with him?

If only Rex Connor’s loan had come through all those years ago, the public would own them (sure we would have sold them off by now, but you get the gist).

As much as Twiggy is whistling in the wind, there is a strong argument advocating restrictions on exports of our valuable iron ore and other minerals, at the rate that we are, depressing our own prices, for what, ultimately.

It’s fine for BHP, Rio Tinto etc, but what they are doing is exporting our mineral wealth at dirt cheap prices (pun!) because they all geared up when the prices were so high.

It was instructive to learn in the recent George Megalogenis documentaries that even Ken Henry thought the boom would go on indefinitely.

Tell me, what boom goes on indefinitely? Witness house prices, I look forward to that bubble exploding. The costs will be significant, but the delay only worsens the problem.