So you think you can dance? Rinehart edition. Gina Rinehart had no love for Fairfax journalists in Melbourne on Saturday, refusing to pose for a photo with Age gossip queen Suzanne Carbone despite happily posing with a journalist from AAP. Carbone got her revenge, though, tweeting a photo of Rinehart tearing up the dance floor (her dance partner was none other than trucking magnate Lindsay Fox). 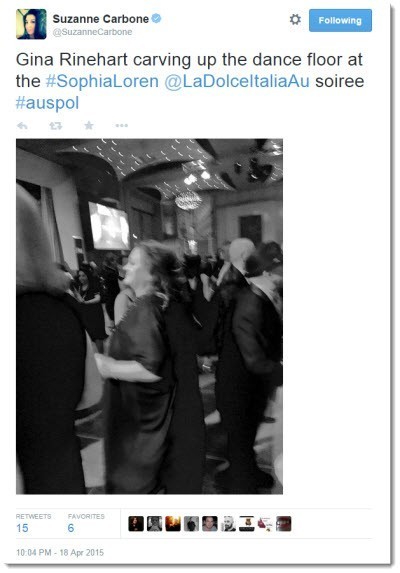 The photo, Crikey understands, was very hard to get. Ms Tips wasn’t invited to the ball, held to celebrate screen legend Sophia Loren’s visit to Australia, but has been told Rinehart’s minder was like a “human shield” to cameras, bobbing up whenever someone got too close. Rinehart was seated opposite fellow traveller and News Corp columnist Andrew Bolt, who wore a bow tie in a rather lovely shade of yellow one doesn’t often see. Perhaps he should give Communications Minister Malcolm Turnbull some sartorial tips, given the latter’s recent fashion faux pas. Carbone has a hilarious piece on the encounter up at The Age, attesting that Rinehart is a “skilled dancer with wonderful rhythm”. Meanwhile, Crikey has been sent the following photos. The top shows Rinehart seated opposite Bolt, and the other, her minder bobbing in front of a camera (and yes, that is former Liberal MP Sophie Mirabella to the far right). 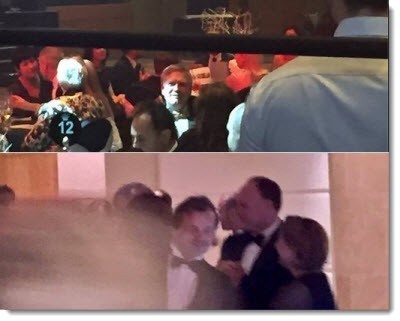 “Forget about the uproar about Woolies and ANZAC day, there is something even worse. The Norfolk Island RSL is refusing to play the Australian and NZ national anthems at its services on 25 April. The RSL management committee have offended every Australian past and present and its actions are the most offensive to all of our serving members past and present. The RSL refuses to play these anthems as it never has and never will: it doesn’t recognise these anthems. Instead it will play the Pitcairn Anthem. National body of the RSL is aware of this and refuses to intervene. This is a very sad state of affairs and very disrespectful to the diggers who fought for our country 100 years ago.”

The President of the Norfolk Island RSL Terence Grube confirmed to us that they wouldn’t be playing the Australian or New Zealand nation anthems on Saturday, saying that’s the way it’s been done since 1948. He said the only way they’d change the anthems used would be if the Norfolk Island Act of 1979 were dissolved. It’s not the first time the anthems used on Norfolk Island have attracted controversy; last year The Times reported that the Australian government had asked the islanders to stop singing God Save the Queen instead of Advance Australia Fair. It doesn’t look like it will be changing any time soon.

Brandzac newsletter. And after we mentioned on Friday that government MPs were sending out glossy newsletters for the day, one arrived in the mail from a tipster in WA. Other tipsters told us they were big, but the photos didn’t do the flyer justice. We put this one next to a newspaper for scale: 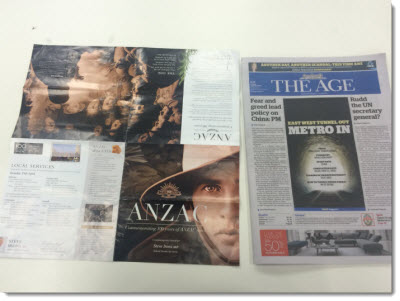 Bury spud regulation. WA Premier Colin Barnett has told The West Australian he’ll be peeling back the powers of the Potato Marketing Corporation, a move Crikey strongly supports. The body — which tells potato growers in WA how many potatoes they can grow, what varieties are allowed, and at what prices they can be sold — will be abolished within two years, the Premier said, despite defending the body to the Oz in January. Barnett is under pressure to show he’s serious about economic reform as he ramps up his campaign for his state to get a greater share of GST revenues (critics argue he should get his own house in order first). Abolishing the spud stasi is low-hanging fruit.

Twitter crosses all borders. Users of Twitter will be familiar with regular emails suggesting that one follows yet more profiles, and a tipster shared this one with Crikey. Sent last week, it recommends recently deceased former PM Malcolm Fraser in a list of “some people you may know”. Our tipster asks, “is this tweets from the grave or have they made contact?” 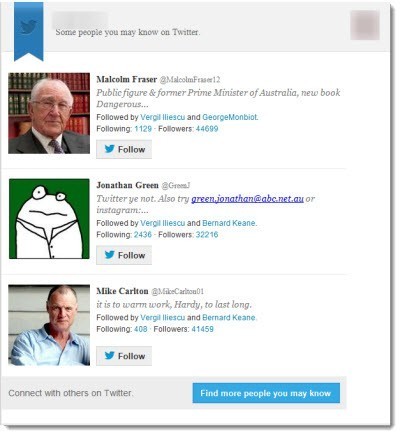 Failing but ethically. The United States military maintains what it modestly calls the Encyclopedia of Ethical Failure, a repository of “real examples of Federal employees who have intentionally or unwittingly violated the standards of conduct”. Created by Stephen Epstein in 2007, the-then Standards of Conduct director wanted it to be used as a training tool for Department of Defense employees as well as to publicly shame ethically challenged personnel. A sample entry: “Taking the Blackhawk Out for Lunch” goes like this:

“A concerned citizen contacted the Inspector General after seeing a Blackhawk helicopter parked in a field behind a restaurant. Inside, he found five service members that had stopped for lunch and were enjoying their meal with several civilians. An investigation revealed that the soldiers were on a training mission, but they had properly listed the restaurant stop in their mission plan. Since the stop was properly listed, the soldiers had not violated any regulations, but they still received verbal counselling because their actions created an appearance of impropriety.”

There’s the two navy executives who took religious leave to play golf and the guy who faked his own death to end an affair. The EEF is apparently popular with other federal government agencies. Can’t wait for the new edition (due out in July) so we can put it in Tips and Rumours.

Motivation from former MP. Former NSW Labor cabinet minister Cherie Burton has launched a new career as a “motivational speaker for empowering women”. Burton, who resigned from the southern Sydney seat of Kogarah at the March election, is busily organising seminars “based on my extensive research, successful 16-year career in Parliament, being a devoted mum, and a woman who believes anything is possible”. She graduated from former premier Bob Carr’s staff to become an MP and an active member of the right-wing female caucus, which included Reba Meagher, Diane Beamer, Angela D’Amore, Tanya Gadiel and Kristina Keneally. Her first commercial event will be held next month. It promises two days of “A Celebration of Women!” and is designed to offer “the personal support and individualized attention you need for powerful insight and clarity in all areas of your life”.

The first day will be devoted to “Inspire, Empower, Succeed!” described as “an event for Women in Business or Mindset, Tools, Strategies, Support and Coaching”, and the second day is “Simplify, Revitalize, Thrive!” — exclamation marks are an important part of any motivational event.  It remains to be seen how many of her ex-ALP colleagues will decide to sign up.

Unbeatable offer. After learning about data retention and VPNs from Crikey, one reader shared this experience with us:

“Disgusted with the government’s (and opposition’s) data retention scheme, I purchased a VPN license yesterday. I played around a bit with various  location settings and left it set in the US overnight. This evening, after reading Bernard’s article on VPNs, I navigated to the Newcastle Herald and began reading about  Julie Bishop’s activities in Iran. An  advertisement on the left hand side of the page was an interesting side-effect of VPN use. Just think what I could do with a pocket knife and NRA membership!” 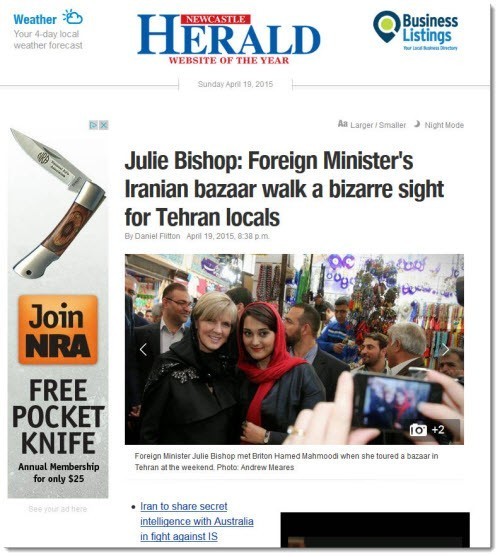 Re Norfolk Island RSL, of course the Queen referred to in God Save the Queen as sung on Norfolk Island is Queen Victoria, who Norfolk folk consider gave the island to them personally. Her portrait still may be seen around the island. Expect no change of words when Charlie replaces Liz.