Melbourne's metros miss out hot raid news, plus other media tidbits of the day

No drops for Melbourne papers. Melbourne’s two metro papers were not given the drop on a joint Australian Federal Police/Victoria Police counter-terrorism raids Saturday morning, with both left to cover the arrests in their Sunday editions, and again today.

Police arrested five Melbourne Muslim youths after they raided a number of premises in the very early hours of Saturday morning. Two teenagers remain in custody; the other three have been released. The Sunday Herald Sun named all five teenagers detained in Saturday’s raids. But today, it joined with The Age in naming only Sevdet Ramadan Basim, the 18-year-old charged with conspiracy to commit a terrorist act yesterday. Generally speaking, people’s names disappear from newspapers after they’ve been charged, but not in this case. The name of another teenager, who is being held on a preventative detention order, was also available initially but isn’t in today’s two main Melbourne papers.

Crikey asked the AFP whether it had asked reporters not to name those detained, but we were told this wasn’t the case. No suppression orders have been placed regarding the raids. — Myriam Robin 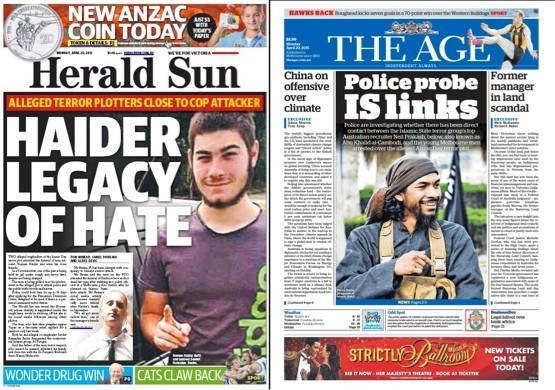 The Australian confirms its losses. At The Australian (and especially its media section), they spend their days dreaming up ways to disparage coverage of the Murdochs and News Corp by Fairfax, Crikey, or anyone else who sticks their heads up above the parapet.

This morning’s CBD column in The Sydney Morning Herald had an interesting rehash of recent toing and froing over The Australian at the Senate inquiry into profit shifting and tax, and the appearance by News Corp’s Australian boss, Julian Clarke, a long-time loyal Melbourne courtier of the Murdoch clan:

“Has News Corp founder Rupert Murdoch decided that the important role The Australian plays in our society exempts it from the edict that all of News Corp’s papers pay their own way?

“For many people, the most startling thing about the testimony of local News Corp boss Julian Clarke at the recent senate inquiry into corporate tax avoidance had nothing to do with the issue of tax avoidance.

“It was his avoidance of the big question surrounding News Ltd’s loss-making flagship newspaper, The Australian, and whether it is ever expected to stem the flow of red ink from its accounts.”

CBD went on to mention reports that News was forcing employees to take annual leave before the June 30 balance date — a claim News denies.

So it was just a coincidence that in the Oz’s media section this morning (bottom of Page 26, under the headline “Rising consumer revenue puts The Australian on ‘clear pathway back to profitability“) was a story by Darren “Lurch” Davidson, which for once wasn’t marked as “exclusive”. The report quoted The Australian CEO Nicholas Gray as saying that “the newspaper’s bottom line had improved ‘substantially’ since 2012-13 when the masthead posted a loss of $27 million before depreciation in the wage of the GFC”.

What’s a US president to do … Graham Richardson and friends frequent those Chinese restaurants where the diners are surrounded by aquariums filled with wide-eyed gorping fish. “Look at those shiny, shapeless creatures, drifting aimlessly through existence, with no idea where they’ve come from or where they’re going. What does go through their heads?”, I imagine the fish thinking. We’re no nearer to an answer after one of Richo’s pieces on foreign policy last week — no doubt thoroughly worked over but having the air of a back-of-the-menu, couriered-to-the-office special (“Russia remains a threat to 牛肉蚝油 beef with oyster sauce central Asian stability”).

Richo’s view? Oh dear, it’s a bit of a dim sum. Obama is a failed foreign policy President because:

The zero-information diatribe is of little intrinsic worth, and there’s a vestige of the old New South Wales right disdain for the “third world” in there, but it is interesting as a symptom — a view of what Angry of Chinatown thinks. The fantasy that the US makes the world safer by more intervention, not less, died in Dubya’s reign. But it was a thing when Richo was a big shark in the tank, not whitebait. Sic transit abalone. — Guy Rundle

Arty tabloid columnists. Poor old Andrew Bolt starving in a garret! The Bolter loves art, part of his proud Dutch tradition, along with crazed religious obsessiveness and xenophobia. But, sigh, he cannot afford it. He’s just like his readers, nose pressed against the window.

Except, of course, he can. As we know, op-ed salaries at News Crap are around $300,000 and more per year, and for a while Bolt was an after-dinner speaker, much in demand. He must have cleared between $4 million and $8 million over the past decade.

So paintings with an $80,000 price tag are well within his range. Less so for his readers, whose median wage of $57,000 would mean a year and a half’s work for a pitcher Bolt could pick up without suffering much of a dent. Surely we should be celebrating wealth and achievement?

Or would the Bolter have less chance of getting these if his readers realised what a gulf there was between they and he? — Guy Rundle

Ten going to Foxtel? You just won’t believe the depths the independent directors of the Ten Network are willing to go to to undermine the value of Ten’s already struggling shares. The shares closed at 20.5 cents on Friday on the ASX, and yet The Australian Financial Review now reckons the independent directors are lining up a placement to Foxtel at 18 cents a share, plus then make a rights issue. (It’s a placement sans Discovery — so much for Sharri Markson telling us in The Australian’s media gossip column the Foxtel/Discovery deal was about to happen a week or so ago.)

It’s a report in this morning’s AFR, which is stained with desperation — the rights issue would not get up without the support of Bruce Gordon (who would say yes, but what will his bank, NAB, say?), Gina Rinehart (not interested), James Packer and Lachlan Murdoch (who want to sell and be shot of this blot on their investment CVs). Packer, Gordon and Murdoch are also on the hook for guaranteeing the $200 million revolving credit loan from the Commonwealth Bank, which has two and a half years to run (plus capitalised interest).

The AFR has reported that Foxtel, which is half owned by News Corp, wants other parties to put more money into Ten because it rightly believes the network needs more money for programming and to survive. Ten is already 10 days past the date (April 10, 2014) when it released its first half figures for the 2013-14 financial year. The company is yet to provide any idea of the timing for the six months to February 28 this year. The trouble with a rights issue is that the company will be asking existing shareholders to again put their hands in their pockets (for the third time in five years). The previous fund raisings (nearly $500 million in total) have been totally wasted on failed programming and management decisions (many of which trace back to the reign of Lachlan Murdoch as interim CEO, then chairman). Without support from Packer and Murdoch in particular, a rights issue would fail.

And thanks to the enthusiastic reporting of the Oz and the AFR, we have had any number of groups “interested” in Ten, but then vanish as quickly as they appear in print.  — Glenn Dyer

C’mon Rundle, get your grammar right: “between they and he”. Shurely shome mishtake.

Don’t be so harsh, Michael, this was merely a ‘lets have fun’ article — as sadly is all too frequently the case.

Why has anyone given Richo the time of day these 20 years? Muyo Pajero!! Honestly, actually that may not be thr right word here.

“and for a while Bolt was an after-dinner speaker, much in demand”

Gosh, they must have been fun events.