Brandzac watch. After Woolies found out the hard way how not to advertise using the word Anzac, we’ve been keeping an eye on the companies that appear to be making a profit from promoting Anzac Day products, and our trusty tipsters have brought a few more to our attention. Fairfax is selling Anzac photos, with ads popping up on the websites of various mastheads, and Target is selling jumpers that reads “spirit of ANZAC — Camp Gallipoli”. A few tipsters sent us these newsletter that they received from government MPs, with one tipster asking us “Woolies was rightly rapped over the knuckles for using ANZAC for shameless self-promotion purposes — how is this, which appeared in our letterboxes this week, substantially different?” Another tipster received the same newsletter from Teresa Gambaro, saying “She always sends one, but this was much larger and glossier than normal. I’m not sure that it’s not worse to have the pollies using ANZAC as promotional material especially when she never replies to any letter I send her.” The other side of the newsletter alerts residents to the commemoration services in their area. 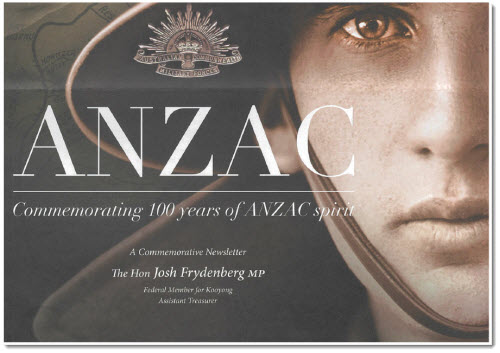 Different Cambodia advice. Yesterday, Crikey published the “fact sheet” given to asylum seekers on Nauru about Cambodia, which said Cambodia was a “safe country, where police maintain law and order”. One tipster pointed out the document is markedly different to DFAT’s Smart Traveller website:

“Foreigners have been the target of sexual assault in Cambodia. Due to the prevalence of HIV/AIDS, victims of violent crime, especially rape, are strongly encouraged to seek immediate medical assistance.

“The level of firearm ownership in Cambodia is high, and guns are sometimes used to resolve disputes. There have been reports of traffic disputes resulting in violence involving weapons. Bystanders can get caught up in these disputes. Foreigners have been threatened with handguns for perceived rudeness to local patrons in popular Phnom Penh nightclubs and elsewhere.

“Banditry and extortion, including by military and police personnel, continue in some rural areas, particularly at night in areas between Snoul, Kratie and Stoeng Treng in the north-eastern provinces.”

Re:think without thinking. It’s our sad duty to report that the Treasury people behind the Re:think (ugh) tax reform paper have been a bit half-hearted in their online engagement, which is perhaps understandable given the tax reform discussion has now become — you wouldn’t pick it! — a series of statements from senior government ministers ruling out various reforms that might upset anyone. The Treasury Twitter account, (by the way, what the hell is going on in the background pic on Treasury’s Twitter page — is that some kind of ruined building?) which Re:think urges us to follow, has tweeted just nine times since the paper was released on March 30, and only once in the last week, and doesn’t reply to tweets. The official hashtag #bettertax has only had a few uses, and even fewer if you remove irrelevant and snarky tweets, such as the one suggesting the best place to start would be to sack Joe Hockey. There’s also supposed to be a “regular” “quick comments” section of the website where people are invited to, erm, comment on specific issues. The section has only been open once since March 30, and only for a few hours (thus, we guess, “quick”), late last week.

On the other hand, the Treasury boffins did run a quiz last night, which couldn’t be accessed from the Re:think site but through Twitter. Doubtless questions like “compared to other countries, Australia’s reliance on personal income and corporate taxes is (a) higher (b) lower or (c) about the same” got the punters flocking. Snark aside, Crikey has some sympathy for public servants trying to run official social media accounts — on the one hand, they’re told to engage effectively in this important space, on the other, that they’ll be taken out the back and shot if they put a foot wrong and embarrass the department or — god help them — the minister. We just hope Treasury didn’t waste a lot of money getting a “social media expert” to tell them running quizzes was a great way to engage online.

Greens have done it again! When the Victorian government announced this week that the East West Link was really, truly not happening (and damn the cost), the Greens attracted the ire of Labor supporters for this social media post that crowed “It’s official: We did it! Community wins as the government finally ditches the East-West toll road.” That didn’t go down too well with members of the ALP, and yesterday the Facebook page “Greens Taking Credit for Things” appeared. This is one of our favourites: 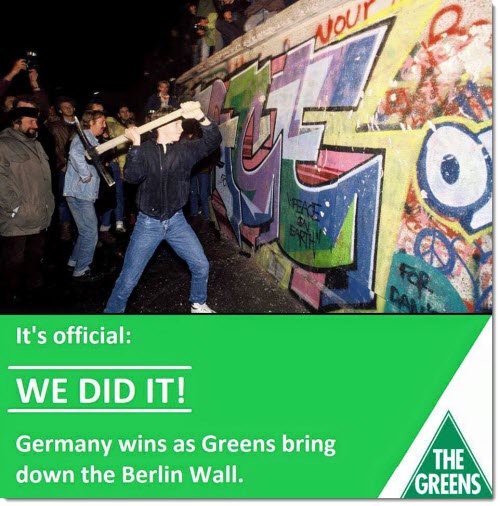 A little agreement. It was just a few years ago that former treasurer Wayne Swan wasn’t a big fan of mining magnate Twiggy Forrest. He said in 2012: “For every Andrew Forrest who complains about high company taxes, and then admits to not paying any, there are 100 or more that go about employing Australians and creating wealth in a constructive way.” But he seems to have softened just a tiny bit, according to this tipster:

“At a speech in front of the young labor faithful in Brisbane last night, Mr Swan was asked about the recent drop in Iron Ore prices. While strenuously denying the end-of-the-world status put on the fall — he did say that there should be consideration of the fact that the Rio & BHP are ‘flooding the market’. ‘I don’t like to agree with Twiggy on anything ever … but’, to much rapturous laughter.”

RIP Democrats. While some would be surprised that it hasn’t happened already, yesterday the Australian Democrats was officially deregistered as a party after failing to maintain 500 members.

A wonderful melodrama. “My bladder is still fighting the NSW state election.” Thus spake NSW government whip and fearless troll the Honourable Peter Phelps, who’s gracing Spectator Australia’s Diary column this week. The column’s quality goes up and down — it really needs someone special to make the format shine — but we’re glad to report that Phelps delivers. Perhaps the highlight, apart from news of his renal system, is this impromptu book review:

“All this travel around to various parts of the state allows me time to indulge in audio books, in this case Atlas Shrugged. Go ahead, judge me, I do not care. It is a wonderful melodrama, with pantomime heroes and villains and perfect for eight hours on country roads. One disconcerting feature is that each of Dagny Taggert’s sex scenes is, technically, statutory rape under NSW law.”

Other cultural works name-dropped by Phelpsy in the column include Verdi’s Aida, Pulp Fiction, and, yawn, House of Cards.

The new One Direction? One tipster had some creative ideas after this photo disappeared from Facebook on Wednesday:

“The attached photo featured prominently on the social media feeds of the four outer eastern suburbs Liberal MPs (Michael Sukkar, Alan Tudge, Tony Smith and Jason Wood). This shot was taken at the ‘Just Build it’ launch back in February. I noticed yesterday that as soon as the Premier announced that EastWest was dead, this image magically disappeared from the MPs’ Facebook page. Granted Tudge has some photos relating to ‘Just Build It’. Given that the PM is playing hardball on the repurposing of $1.5billion relating to EastWest, what is the Liberal Party’s stance of the re-purposing of this image? I personally think it would make a great CD (album for us older folk) cover for a Liberal themed Boy Band. Can I suggest the names ‘TuffLuv’ or ‘Surplus Soon’ (that one would become Sir+Soon) maybe ‘No No Sharia’. Like all boybands each member has to fit a personality type, I suggest Sukkar is the strong silent one, Tudge is the bad boy, Smith the hotter than hell-fire one and naturally Wood the dopey one.” 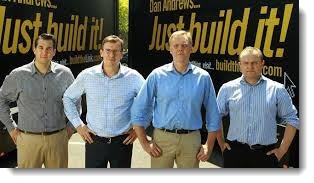 Let it go. Most people in their 70s are still getting used to all the things mobile phones can do, but one Republican Senator has got it so right. A US Senate trade hearing was interrupted yesterday when Kansas Senator Pat Roberts’ phone rang. His ringtone is Let It Go from the extremely popular Disney movie Frozen. He rejected the call, joking he’d “let it go” and later tweeted: “Somebody had to tell the Obama Administration to ‘Let it go.’ #forthegrandkids“. The video is here.

Re: The Democrats – it was only a matter of time before the Lees were tossed.

Atlas shrugged – what a surprise!

I’m not impressed by Peter Phelps’ twitter efforts. On the other hand, in more serious endeavours he has shown an intellectual capacity not encountered frequently among Crikey and its Devoted Acolytes.
Re the Democrats’ incompetence with the simple task of maintaining their Electoral Registration,although I knew but one of their potential candidates, I have to say it’s hardly surprising.

Norman, you could always go and join a group with whom you have more equal intellectual capacity.

bushby jane, I already have that PLUS you.