The comment sections on news websites are massive sausage-fests, new research says. And other media tidbits of the day.

Men making their voices heard. Women’s voices are missing from the comments section of major news sites, according to new research from the University of Sydney. An analysis of the comments sections of major online international news platforms has shown that men’s voices dominate across the board. The study looked at online publications such as the Guardian, the Daily Mail and the New York Times to establish how many commenters on news stories are female. While digital news is often heralded as a unique opportunity to engage readers and allow them to join the conversation, this benefit is not being extended to female readers, the study suggests.

Of the news outlets surveyed across the US, Australia and Britain, 15 publications feature comments sections that are heavily dominated by male voices. The researchers searched for commenters with explicitly female names, ruling out those who used male names or pseudonyms. On all counts, those with female names commenting were a minority. On some major news sites, they made up as little as 3% of commenters. The most gender-neutral comments section had those with female names make up 35% of voices.

Dr Fiona Martin, senior lecturer in convergent and online media at the University of Sydney and author of the study, said the lack of women’s voices is reflected in similar trends studied in the context of meetings and other public gatherings — whether in person or online, women’s voices are being excluded from the conversation. “In some ways, this study reflected what we already knew about gender dynamics in public conversations — that men always tend to dominate. However we did not expect this to translate directly to public conversations online,” Martin told Crikey sister site Women’s Agenda.

“It appears our experience of online conversations is reflecting our gendered experiences of the world at large. Just like in face-to-face public conversations, like meetings or forums, women are being put off by male voices being adversarial, dismissive and sometimes abusive.” — Read Women’s Agenda reporter Lucia Osborne-Crowley’s full piece here.

Outrage the surest publicity. Guess what? Journos like to talk about themselves, and news about the profession is always worth a few clicks.

In what’s becoming an anticipated annual event, US jobs website CareerCast.com has released its annual list of the best and worst jobs. The ranking rates 200 professions based on five criteria including physical demands, work environment, income, stress and hiring outlook. Yet again, the website placed “newspaper reporter” at No. 200. Its reasoning:

“Readership has steadily moved from print publications, whether they be newspapers or magazines, in favour of online outlets. The resulting decline in adverting revenue has left newspapers – and thus newspaper reporters – feeling the pinch.”

What happens next? So far this year, the ranking has been reported on sites like News.com.au, The Sydney Morning Herald, Mirror UK, New York Magazine, Time and The Washington Post. Not to mention the hundreds of outraged tweets sent from of journalists around the world.

CareerCast.com publisher Tony Lee denies tweaking the data to make sure journalists sit up and cover it, but he admits his website’s traffic increased significantly in 2013, the first year reporters were placed at the lowliest position. CareerCast.com wasn’t entirely pessimistic about the job outcomes for reporters, and softened the blow by pointing out that journalists’ “good writing skills” could transfer to other careers in public relations, marketing and advertising. — Crikey intern Sophie Thomas

Spare a penny for Ten. Newly cash-rich Nine Entertainment Co should do the right thing and use its new-found cash pile and bail out its friend in need — the Ten Network. In doing so, Nine and its CEO, David Gyngell, would show up the tight-fisted big shareholders in Gina Rinehart, James Packer (Gyngell’s old sparring partner), Bruce Gordon, and the cause of most of the network woes, Lachlan Murdoch, all of whom won’t put their hands in their pockets to help the network survive its latest cash crisis.

In fact, they want to sell and run (incurring big losses if that happens). Nine yesterday signed a deal to sell its Ticketek group to a private equity mob for $640 million, which includes a bit of debt. Now that $640 million could buy Ten, if Nine was of a mind to do the most sensible thing in this current silly takeover attack on Ten. Ten had a market value of $526 million, with the shares at 20.5 cents. No need to pay any more, Ten is skint and the network’s independent directors have been busy bidding down the price in the on, off, don’t know auction, which started at 26 cents a share.

Nine would have money left over to finance some programming at Ten, or even close it down and share the commercial TV market with Seven. It’s a bit like what BHP and Rio Tinto should do to Fortescue — take it over and close the mines and take 160 million tonnes of iron ore exports off the market to push up prices. What we need is a bit of vision and ambition at Nine, BHP and Rio. Think of the national good — or think of all the juicy profits to be made from reverting to an oligopoly. Just what is happening to the supposed joint bid from Foxtel and Discovery Communications of the US? Has it gone away as the rest of the TV says it has, or are there still hopes of a deal under 20.5 cents a share? — Glenn Dyer

Dead-tree industry shake-up. The US newspaper industry is approaching a major carve-up with several big deals in the pipeline, including the sale of the New York Daily News. Gannett is about to finally spin off its newspapers, making it the last major media company to separate its papers from its electronic and video operations. Billionaire Warren Buffett returned to the takeover trail last month, and while those moves and especially the Daily News sale in New York have grabbed the headlines in the past month, a bigger transaction is looming — one which will herald the entry into the dead-tree industry in America of one of the most aggressive bottom-feeders in global asset management.

Apollo Global Management, the company that helped sort out and revive the fortunes of the Nine Network in Australia, and the Endemol TV production house globally (by merging it with the Murdoch-owned Shine) is poised to carve up Digital First Media, one of America’s larger newspaper owners. And it will do it in co-operation with Gannett, the owners of USA Today and a string of other papers, which are about to be spun off into a separate company in a few months time.

The carve up of Digital Media First (formerly Media First Group) is expected in the next month, at a reported cost of US$400 million. Apollo beat another US finance group, Cerberus Capital Management, to acquire Digital First Media’s 75 daily newspapers and more than 100 non-dailies. Gannett will buy 10 of the papers in the sale, to add to the 81 already owned, including USA Today (which is the third-biggest selling US paper). US analysts say it will help Gannett get a higher value on its print assets once they are spun off.  — Glenn Dyer

Front page of the day. Chelsea Clinton talks to Elle about the importance of a female president … 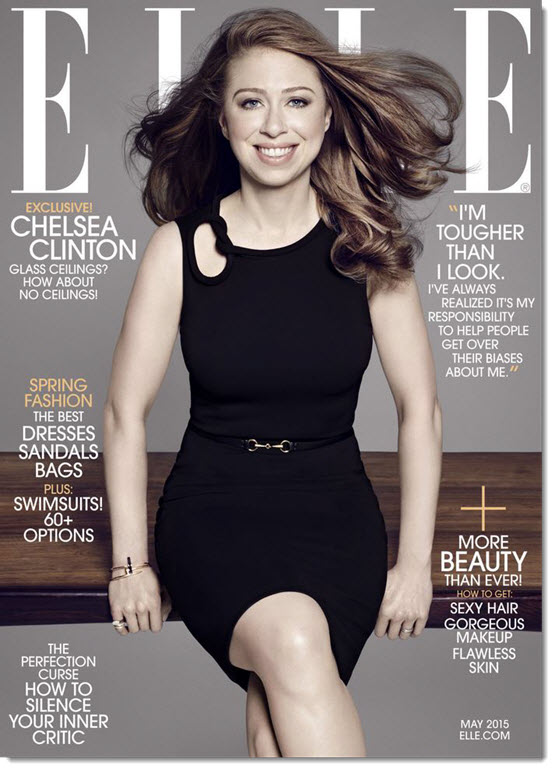 That “research” you highlight in the Men’s Voices para is fatally flawed if this statement “The researchers searched for commenters with explicitly female names, ruling out those who used male names or pseudonyms” is true. My most commonly used user name for hanging out online (the one I’m using for this comment) is purposefully gender neutral as are the names used by most of my female friends and colleagues. But lots of us do comment so our voices are actually heard. And who is to say that all the people behind female user names are actually women? I can’t really see this so-called research has any validity at all with such lax methodology as a starting point.

I have to agree with BSQ. The only reason I use my (female) name on this forum is that I have never figured out how to use a pseudonym.
On other (more user-friendly)forums I have a gender-neutral username, precisely because I think it makes people take me more seriously.

“…ruling out those who used male names or pseudonyms….”

By so doing, you have excluded the majority of ‘womens’ voices” because they have learned that, because of the “… adversarial, dismissive and sometimes abusive..” online culture, it’s a necessary subterfuge. Well, the smart ones who want their opinions considered equally have done.

Of course, when they do so, they can also be adversarial, dismissive and sometimes abusive themselves, which they sometimes do.

How can any reviewer tell which poster has which gender?

I consider this “research” inherently flawed and no more than tabloid click-bait.

Who am I today, Emmeline Pankhurst or George S. Patton? Clue: I have been BOTH in my online communications!

Well. I’m one woman who is completely put off by the ‘adversarial, dismissive and sometimes abusive’ online culture – on both mainstream and alternative news sites. I find it to be abusive more often than not, and most contributors are more interested in point-scoring than in genuine discussion. What’s the point of engaging in a battle rather than a debate?