Woolworths’ Anzac campaign perfectly appropriate to what Gallipoli has become

The reality of Gallipoli is secondary to its function as a powerful but empty signifier. If we are going to hate Woolworths' co-option of the Diggers, why do we allow everyone else to do it? 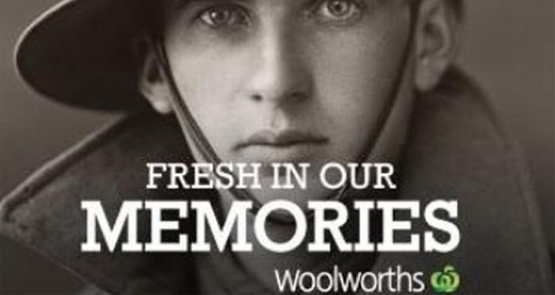 Yesterday, many internet users identified the “unAustralian” in a campaign by supermarket chain Woolworths. That the retailer happened to violate Anzac Day, that rare institution we think of as inviolably Australian, gave birth to the hashtag #Brandzac and a thousand unified ragegasms.

That the Woolworths marketing department showed a gloriously poor taste is not in doubt. A company that makes prominent use of the term “fresh” used it again in this centenary month of Gallipoli. The Diggers were refigured as “Fresh in our Memories”, and that anyone adult human could think that the obvious conflation of a soldier who had laid down his life for empire could be meaningfully compared to a ready-made gourmet pasta meal for two is almost beyond belief.

But as others have pointed out, a good deal of the marketing that surrounds Anzac Day is naff. The “raise a glass” campaign by VB may have been refigured as an “appeal” through its donation to military welfare programs, but it’s still gauche and greedy to pin your beer to slaughter. However well-intentioned Camp Gallipoli might be, this horror holiday under-the-stars does not honour the memory of the war dead so much as it inspires a theme park. With and without the endorsement of the RSL, companies turn a profit from memory and, in so doing, challenge the ethics of remembrance itself.

Not that there can ever be a pure or authentic way to remember any act. Our national view of historical events changes with time, and there is an argument to be made that the act of passing legislation to protect the Anzac brand can produce only the opposite of its noble intention. The artificial imposition of glass on an event makes it less of an event than a dead museum piece. If we don’t allow Anzac Day to breathe and permit its ongoing suffocation by the sometimes perverse historiography of the RSL, it dies in the national memory. If you take this critical view of history as simulacra, and I tend to, then the Woolworths campaign is, even if ridiculous and crass, also entirely appropriate.

The RSL endorses a single version of remembrance of this terrible battle. When remembrance of anything is strictly contained and controlled, we inevitably start to forget. It was in 1983 that Alan Bond described his America’s Cup win as comparable to the “victory” at Gallipoli, and Geoffrey Blainey put a scholarly if positive spin on the slaughter. Certainly, we everyday Australians have begun to think of this event less as a tragedy or as a caution against fighting unwinnable or unethical battles in the Middle East than as an optimistic way of defining ourselves.

The reality of Gallipoli is secondary to its function as a powerful but empty signifier. And again, it seems to me, we are defining ourselves by what we are not.

We believe that we can see in a clear line to the sacrifice and slaughter a century ago, but what we see instead is an idealised and ideological version perfectly, if crassly, expressed by Woolworths. It’s not just Woolworths mishandling the memory of the Anzacs but the RSL and a range of institutions.

Blainey was largely responsible for popularising the term “black armband view of history”, intended to describe an unnecessarily emotional and purportedly fictional or naive view of the slaughter of Australian Aboriginal peoples. Perhaps this term is better applied to Gallipoli.

This is not at all to claim that this was not a bloody defeat. This is not to suggest that we are best to forget the war dead. It is, however, to propose that Gallipoli, thanks to the best efforts of some of our worst institutions, has become as hollow as the theme parks that will commemorate it.

Disneyland functions to make the things that surround it seem more real and, now, Gallipoli does too. We empty this terrible battle of meaning and fill it with easy glory and we are again defining ourselves by what we are not.

This isn’t new. The Mad Monk was pulled up last year for slotting trade liberalisation amongst “the allies” into his back slapping, flag waving photo opportunity to Europe on the D-Day anniversary.
https://youtu.be/ZD5Icg4AgOk?t=1m42s

Indeed, @furry barry. The use of a military event for political and financial profit ain’t new. Mine was more a suggestion that it was in fact so old that the meaning of this historical event just has currency but, sadly, no longer points to a real thing.

As an amateur war historian I particularly like books about war correspondents, many of whom were Australians. The story of Keith Murdoch always resonates with me but is never mentioned even at this time of year.
Murdoch visited Gallipoli and he was horrified both by the awful conditions under which the soldiers suffered and the very comfy conditions endured by the generals. Whilst the diggers lived in trenches filthy with lice and fleas and surrounded by old body parts the generals lived in luxury on ships offshore sipping gin and tonics. The soldiers barely had enough water while the generals had ice!
He wrote a report that he sent to the Australian and British prime ministers and this helped to establish that Gallipoli was in fact a disaster.
He went on to London determined to get the boys evacuated. It was an uphill battle especially as the army estimated that evacuation could cost thousands of lives. Eventually much to the displeasure of Churchill and the top brass there was an evacuation.And the death toll- nil!
Why is Murdoch never mentioned in the Gallipoli story, an inconvenient truth?

Yes it is a strange quirk of history that we as a nation pride ourselves on our glorious slaughter of our youth in their prime & yet use the same historical instances to recruit by way of honouring albeit through fruit & veg department to perpetuate every year what was & is one of many instances of the waste afforded to our nationhood as it matured into what we now call the ANZAC spirit.