The IPA has another win ... is Julia Gillard a pirate? ... Turnbull's throwback Thursday ...

You can’t always get what you want — unless you’re the IPA. As part of our ongoing series tracking  how closely government policies align with the Institute of Public Affairs’ policy wishlist, we wrote yesterday that the elimination of the National Preventive Health Agency was at the “promised” stage. But, as a tipster pointed out, the agency closed its doors last year, and its website says that its “essential functions” have been moved to the Department of Health. According to our tipster, those functions have actually fallen by the wayside:

“Their essential functions have supposedly been transferred to the Department of Health, but the programs that were in place have vanished. Hardly surprising when the Agency was not favoured by tobacco, alcohol or food companies.”

Gillard a GoT pirate? Hundreds of thousands of Australians sat in front of TV screens on Monday to watch the latest episode of Game of Thrones (and how many more sat in front of their computers?). One who was eager for news of Westeros was Julia Gillard. The former PM’s affection for the series has been reported for some time, and in some of its better commissioning, The Guardian has published her review of the episode. Except that Gillard didn’t just recap the first episode, but wrote:

“Tuning in to the first two episodes feels like renewing an acquaintance with old friends, not sitting a too-hard examination. And intriguingly, for the first time this fifth series gives us flashbacks — glimpses of the backstory never before brought to the screen.”

Sorry, TWO episodes? Only one has aired on Foxtel, so could Gillard have pirated the show? The first four episodes of the season were leaked on Sunday. Another likely explanation is that Gillard was given preview copies as a reviewer, so we put the question to her. Her spokesman said:

“The review was written under a longstanding arrangement with The Guardian for Ms Gillard to preview GoT in advance of airing and write her review as part of the Guardian’s coverage. The DVDs were couriered from the US via Foxtel late last week.”

Turnbull a man for the ages. The Australian‘s Darren Davidson wrote in an “exclusive” this morning that Communications Minister Malcolm Turnbull had “risked ridicule” by posing for the front cover of GQ Australia, the new edition of which will be out on Monday. Turnbull is looking very suave in the photo that sits alongside the headline “Primed Minister” as part of the “power issue”, but as Fairfax’s Matthew Knott reports, Turnbull actually posed for the photos in 2013. And like power, a well-cut suit never goes out of style.

Sloan bows out. After seven years on the Westfield board, economics professor and Oz columnist Judith Sloan won’t be seeking another term. Her departure was revealed in the notice of meeting for Westfield’s next AGM, to take place on May 14. Sloan’s association with the Lowy family goes deeper than the mall chain Frank Lowy founded, now led by his sons. She’s also on the board of the Lowy Institute for International Policy, with Frank himself.

Lacy to the Oz. Eight months after it hired a slew of Fairfax business writers while talking big about its plans to take on the AFR, the Oz has hired one more. Expect an announcement any day now heralding the arrival of Christine Lacy, who’ll work part time writing the Margin Call business goss column with Ben Butler. The appointment should really beef it up — Lacy’s as experienced as they come with that kind of thing. She’s done Street Talk for the Fin, as well as CBD in the SMH. She’s also a former spinner for Channel Nine. She left the Fin, where one of her last jobs was media editor, in early 2012, a few months before Fairfax went on a massive redundancy spree.

When Butler defected from Fairfax, the Oz ran a headline warning Fin back-page scribbler Joe Aston to “watch out”. Crikey asked Aston whether he was scared now — he didn’t take the bait.

Ready for your close-up? Since we published this photo of a prominent Australian on Tuesday we’ve had many guesses about the identity of the person featured — none of them correct. So those who guessed Christopher Pyne and Julie Bishop can rule those out. Funnily enough, no one has got in touch to ask us to take his photo down, either. We also have this photo — a friend of said prominent Australian, who is also a public figure. Any ideas? 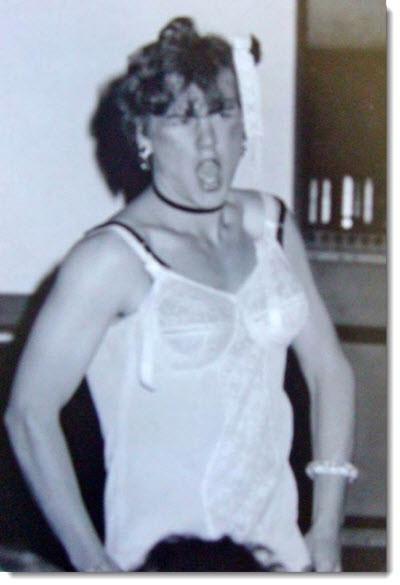 Things can’t be too bad in WA after all if the Premier uses a private jet to fly to Canberra.