The lies our government is telling refugees about Cambodia

The Australian government has devised a "fact sheet" to tell refugees in Nauru what they could expect from life in Cambodia. But the fact sheet is full of lies. 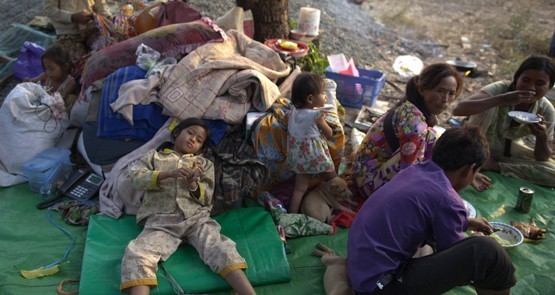 The Australian government is telling refugees in Nauru outright lies about the reality of life in impoverished Cambodia, which has been ruled by a ruthless dictator for almost 30 years.

Its efforts are outlined in an extraordinary five-page document, “Settlement in Cambodia Fact Sheet”, which was issued to refugees and obtained by Crikey.

You can read the document here.

But it appears the Abbott government has a strange understanding of “facts”.

The document states that the first flight to Phnom Penh will be as early as April 20, which is next Monday. It was last updated on April 10.

Yet Crikey understands from a number of sources that there has been no interest from refugees currently in the Nauru refugee camp and that as of last week, the Cambodian government had received no applications for resettlement. It is also understood that extraordinary pressure is being applied by the Department of Immigration and Border Protection — the result of pressure from cabinet — on detainees in an effort to get “some bums on planes”, as one insider put it.

Decent working people I know in Phnom Penh live three to a tiny room, have no indoor plumbing, and bare wood or dirt floors. And these are not the poor people.

The fact sheet states that Cambodia is safe. It is not, especially after dark. I personally know at least three people who have been mugged in the past year, including one female friend. On my second-to-last visit — I have been about 10 times in the past two years — thieves on a moving bike tried to wrest my mobile phone from me while I was travelling in a tuk tuk. Oddly, the document states that here are no problems with stray dogs — again an outright fib.

The document says that Cambodia is a democracy, yet Prime Minister Hun Sen took charge — after 12 years of coexisting with rivals — in a coup d’etat. While there have been elections since, Hun Sen has never lost. The opposition and aid groups audited the last election and found multiple irregularities, including ghost voters and opposition supporters missing from the rolls. The legal and prison system is utterly corrupt, something I also know from first-hand experience trying to help a friend trapped in the system.

The fact sheet states — twice! —  that Cambodia has “good healthcare for the region”. More nonsense: anyone with anything serious is medi-vacced to Bangkok. Only Laos and Myanmar have worse healthcare in the Association of Southeast Asian Nations.

Then there is the money being thrown at the problem. Refugees are promised four years of housing, healthcare, education, Khmer lessons and support, all paid for by the Australian taxpayer, yet we do not get any of the benefit of these people’s enterprise.

After laying out a Cambodia that only exists in the minds of Canberra bureaucrats, the documents then details packages worth tens of thousands of dollars in a last-ditch effort to convince some of them to move to Cambodia under the highly questionable resettlement deal (decried by the United Nations) that Australia struck with Hun Sen last year.

The fact sheet also states that Australia will make efforts for refugees to be reunited with their families if they move to Cambodia (the packages could be worth well in excess of $100,000 in family cases).

The deal with Cambodia was inked by former immigration minister Scott Morrison in an embarrassing ceremony during which he swilled champagne with Hun Sen’s cabinet ministers.

Details have never been released to the Australian taxpayer, although it is understood a payment of at least $40 million will be made to Hun Sen’s government, which has an audited track record of embezzling aid funding. About 50% of Cambodia’s budget comes from foreign aid. Its government heavies live in high-security places, and most of its population lives in poverty. It is the second-poorest country per capita in south-east Asia and may soon be overtaken by Myanmar, which is now outstripping it in GDP growth.

Hundreds of thousands of Cambodians work illegally in neighbouring Thailand — some are enslaved in that country’s notorious human trafficking industry, which Thailand’s present government finally seems to be targeting. There are few jobs for university graduates, and the country’s main exports industry, the chronically underpaid garment trade, is home to some of Asia’s most notorious sweatshops.

In the period since the grubby deal with the Abbott government was signed, Cambodia has shown its refugee colours. Dozens of Christian Montagnards from Vietnam fleeing  persecution have been returned, while many more remain in hiding from Hun Sen’s thugs. But the fact sheet cheerfully insists: “In Cambodia, there are jobs for migrants, and strong support networks for newly settled refugees, including opportunities to buy businesses.”

The real kicker is that once they have agreed to resettle in Cambodia, the Australian government washes its hands of the refugees. The only country that can have them back is Nauru, a questionable position, like much of Australia’s refugee policy.

The Cambodian government has a track record of returning refuges to their original country of persecution. The country is offering to take the refugees from Nauru for one reason only: millions of dollars from Australia.

Any government and bureaucracy capable of attempting to barter its shameful human cargo with such lies and blandishments has clearly chucked its moral compass overboard.

Cambodia not a safe place for Australian refugees — or anyone else

The disaster of Cambodia, the so-called hope for Australia’s refugees

Cambodia no place for refugees — and Abbott should know it

Thanks for this piece of sanity MS.
Listening to the lunacy being spouted by the Govt on the wonders of life in Cambodia, was beginning to sound like Lewis Carroll was writing their scripts.

Well said. It needs to be noted that the only political party protesting this outrageous state of affairs is the Green Party. Labor are no better than the Coalition and lost what little moral compass they may have had many years ago.

Michael, public servants work for the government of the day under The Australian Public Service Act. They are instructed by their Minister to implement government policy. These bureaucrats may not personally agree with the governments policy but their job is to implement it. Please stop blaming the ‘bureaucrats’. They are one of the bulwarks of our democracy. Imagine what this government would have done without their restraining advice. If you are unsure please talk to Bernard Keane.

Michaels article is pretty close to the mark but I shall add what I know. I have lived in Cambodia for eight years, speak the language and have a family there.
Firstly the dog thing, what’s that all about? Cambodia has more stray dogs than any place that I have ever seen, it has virtually no cats because the dogs kill them all.
Health care is deplorable, Khmer doctors are usually greedy charlatans, many are unqualified and others have cheated in their exams. Pharmacists are mostly unlicensed and many drugs are fake, especially in government facilities where the staff steal the drugs to sell them and substitute the genuine with fake. Any foreign doctor will advise not to have any sort of procedure in Cambodia so rich Khmers and westerners fly to Bangkok, Singapore or Saigon. Very few western women have their babies in Cambodia, too many mothers and babies die in childbirth.
The education system is awful, kids only go to school for half a day and all must pay the teacher every day or they are ostracized. There can be up to eighty children in a classroom and toilet facilities can be non existent. Hygiene is rarely practiced anywhere and rubbish and rats are everywhere.
The police collect their own taxes and their is no rule of law, petty cringe is rampant and usually the only justice is when the mob catch the thief and beat him to death with the police watching on. It saves a lot of paperwork. A basic room in Phnom Penh is fifty to sixty dollars a month plus power and water of about ten dollars. Wages start at three dollars a day and go up to about eight dollars for a semi skilled building worker. There is zero health and safety and many people die at work or in the case of garment workers slowly poisoned by chemicals. Cambodia is not very cheap, virtually all food is imported and a living wage in Phnom penh is minimum two hundred a month.
Nowadays there are some buses but if one doesn’t own a motorbike it could cost ninety dollars a month to go to work. Parking a moto safely is a problem, they are always being stole.
The language is not that easy to master, especially reading and writing and to be able to learn in six months is ridiculous. Any guarantee of citizenship is a joke, there is an election in less than three years and the opposition are likely to win, they are xenophobes and I can’t see them giving any non Khmer citizenship.And if you think that our government tells lies try dealing with the Hun Sen mob, they are shockers.
Now the possible good news. The economy is booming, over 7% growth a year and there are opportunities for the skilled or entrepreneurial. There is a recently arrived Iraqi family running a restaurant and apparently they are happy. I have a Sri Lankan friend running a garage who has been there since 1994 and his property has increased in value from $60,000 to nearly two million!
Expats love Cambodia for it’s freedom and it’s funny little brown people and there are young Europeans arriving to work and buy property, things they cannot do at home.
I tried to talk to my local moron member Mr Entsch to suggest that refugees with skills could be teamed up with local expats seeking skilled people. Cambodia has no skilled people in cobstruction or mechanical trades for instance. He wouldn’t talk to me.
I will be returning there next year armed with the OAP and look forward to beer at $11 a carton, happy pizzas and shakes and thirty cent cigarettes. Not to mention really nice people with strong family networks, no expensive child cars and the grandparents at home not locked up in the home.
And there’s the key to Cambodians survival, the family network. Without that refugees are buggered.