Why won't Shaun Micallef's Mad as Hell be returning? ... No Land Tax, but lots of excuses ... SBS wins the internet ...

Vote early, vote often, vote in someone else’s election. Subscribers to the Australian Greens email list might have been confused to find a missive in their inboxes yesterday titled “Can you vote on May 7?” — considering there’s no election in Australia on that day we wouldn’t blame them. The email, from Natalie Bennett, leader of the UK Greens, tells readers that all Australian adults currently in the UK are eligible to vote in the upcoming election there and also encourages eligible Brits living in Australia to register to vote absentee. We thought it seemed strange that Aussies in the UK could vote, so we checked up and the Greens are correct. So if any expats want their share of democracy, they can vote on May 7.

Favouritism at Nine? Passions boil over even in the most successful work environments, and it seems like egos are getting bruised at Channel Nine’s Sydney newsroom, with a tipster telling us that “big-name personalities” were getting “special treatment”. According to our tipster, “apparently there’s a rule these high-profile names must have a story in the bulletin … even if they didn’t do the leg work”. We put the tip to Channel Nine news director Darren Wick, who told us it was “absolute nonsense”. It’s not an unusual gripe to be heard around newsrooms, especially in the hyper-competitive world of the 6pm bulletin, where battles are not just fought between Seven and Nine but also between egos within the same newsroom jostling for space at the top of the bulletin. One commercial TV veteran (not from Nine and not the one who sent in the tip) told us it was a sign of “business as usual”, saying networks will do what they can to help their stars, or those they want to develop into stars, land the big stories even if it means others do some of or all of the legwork. And making TV news is collaborative to begin with. “People sometimes get upset, but that’s just life in TV.”

Mad as hell over budget cuts. A little less truth will be spoken to power as Shaun Micallef’s Mad As Hell wraps up its only 10-episode run this year from 8.30pm tonight. Although the ABC announced at the end of last year that the show would not return for a second 10-episode run in 2015, as it did in 2014, TV Tonight originally reported: “It’s not clear whether the decision is directly related to funding cuts”. Well, now Micallef himself has removed any doubt.

We hear from a tipster who attended last night’s taping of this year’s final episode that the great man himself spoke quite earnestly on this issue after a question from an audience member. In between takes, Micallef paused his comic repartee with the Mad As Hell’s crowd warm-up man, Michael Pope, to explain that, indeed, it is ABC budget cuts that have made a second run impossible. This follows an April 3 blog post from Micallef saying the same thing, albeit in a less solemn tone. Micallef also said during the taping that Mad As Hell would return in 2016.

Charlie Pickering made a guest appearance during the taping, making a cameo to plug his upcoming show, The Weekly, which will take over the Mad As Hell time slot from next week.

Welcome! You’re all fired! The Macquarie and Fairfax radio merger has been described as more like a “hostile takeover” in some reports, and the staff left at former Fairfax stations have already told the media that they are angry about the way departing staff have been treated. So Melbourne staff weren’t impressed to receive this invite offering “a small celebration of our new company” after their colleagues at Magic 1278 had been sacked. The email with its dreary grey background doesn’t look too cheery — maybe it reflects what the mood will be out at Docklands tonight. 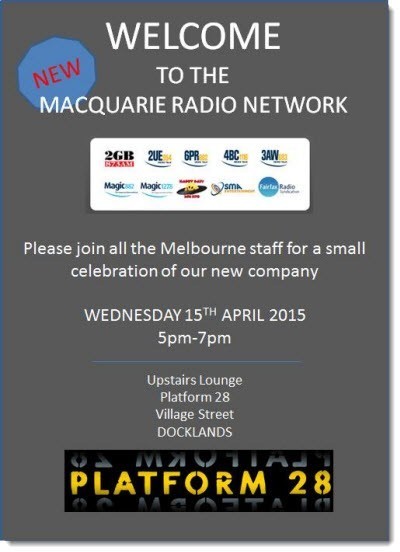 No Land Tax watch. Workers for the No Land Tax Party have been promised that they will receive payslips today — and actual money by April 28th. Emails from convener Peter Jones seen by Crikey have taken on a much more conciliatory tone than his previous ones, saying “Please accept our apologies for the delays in your pay … and in keeping you informed. These delays have occurred for reasons beyond our control. Nevertheless, these are OUR problems — and not yours. We therefore apologise for any inconvenience or distress that has been caused to you.” It also gives workers a contact at the Fair Work Ombudsman.

SBS wins at memes. How do you advertise a 10-year-old movie that has become more known for an overused meme than the rest of the plot? Send up the overused meme as an online ad. SBS’s social media team nails it with this Downfall video: 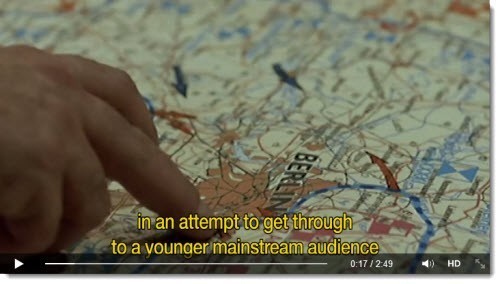 Tips and rumours: Greetings from the Death Cult

“Even the Footy Show has used that meme” hahahahaah

Whaaaaat??! No Mad as Hell for the second half of the year? Madness – that’s the best show on telly! Crowd funding, anyone?

Shaun’s comedic skills lay elsewhere, rather than playing the fool.

Sorry guys but it is Australia that is an outlier in not letting legal residents vote.

Aussies can vote in UK and NZ but the reverse is not the case.

Given the choices and compulsory voting that might not be a big loss but as a tax payer it irks.

Only one 10 episode run of Mad As Hell for 2015?!! The ABC Board must be full of economic girly men (and manly girls)!